Equities: Time to wade in

In the absence of further bad news, selling fatigue may be the reason stocks begin to move up 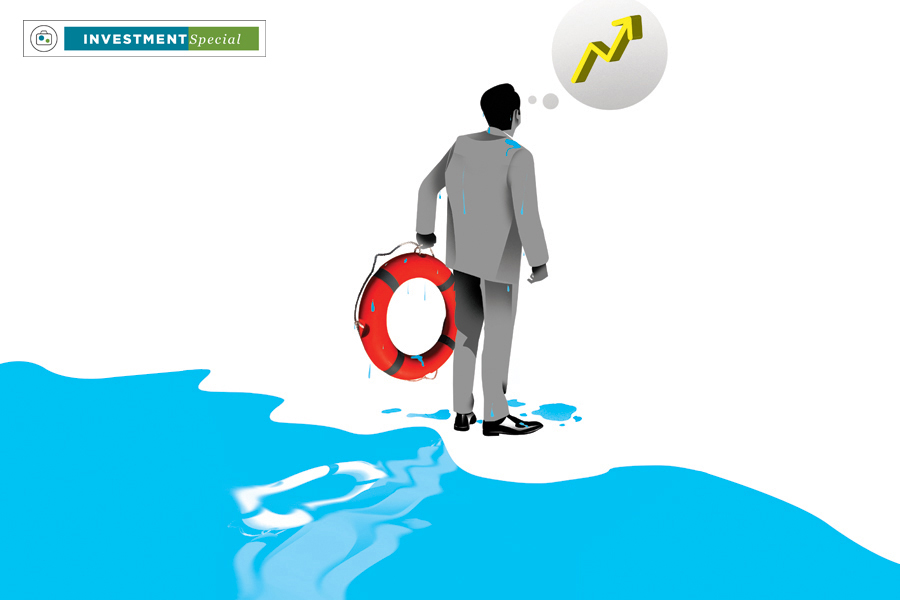 The first hint of a bounce back is always met with disbelief. Is this real or is this too good to be true? Yet, this is a question investors and their money managers, who’ve suffered bruising losses in their portfolios over the last year, are increasingly asking. After all, Sensex has been flat but midcap index is down 22 percent.

There are initial signs the market is in oversold territory. Take the case of auto bellwether Maruti Suzuki. In August a slowdown in sales growth caused the market to shave ₹66,000 crore ($9.5 billion) off its market cap over the next month. Monthly auto sales data released on the first of every month became a keenly watched metric with the stock nervously yo-yoing on that day. February sales remained virtually flat (they rose 0.9 percent) and the stock ended March 1 up by 2 percent. The stock is still around the same September 2018 levels with a 27 percent lower market cap. The decline has, for now, stopped as the market waits for earnings growth to catch up with valuations.

Maruti is not a one-off example. Broader market stocks with strong fundamentals have seen modest increases of between 5 and 20 percent. While prices are still down for the last 12 months, for the most part valuations are now reasonable and ready for the next move up.  The elections, foreign and domestic fund inflows, oil prices and a US-China trade war still remain risks but if one goes by valuation alone, there is also an acceptance that the market may be close to a bottom. (Keep in mind that while there may not be a lot of price damage hereon, the chance of a time correction is still there.)

The divergences between the large cap and midcap indexes are at five-year highs (with midcaps at a 18 percent discount). “The last time midcaps were at lower levels was in 2013 but that is unlikely to repeat this time as that was also at the bottom of an economic cycle,” says Kenneth Andrade, founder and CIO of Old Bridge Capital Management.

Getting Here
The derating of India’s markets was equally on account of domestic and global factors. Both had a common thread—the rising cost of capital. Post demonetisation the surge in bank deposits led to lower interest rates and the cost of capital for AAA-rated NBFCs fell to 6.1 percent in May 2017. From then it was a steady rise till the IL&FS crisis sucked out liquidity from the system and sent borrowed costs soaring. With money no longer cheap, valuations had to correct.

As often happens the most expensive part of the market was the first to correct. Indian investors who had loaded up on mid and small cap funds saw their portfolios fall by an average of 20 percent (Read SIP and Dip). In addition rising oil prices pressured the current account and resulted in the rupee depreciating 8 percent. The derating of Indian markets left only two identifiable problem areas —elevated consumer companies’ and NBFC valuations, according to Rajeev Thakker, chief investment officer, PPFAS, a mutual fund.

Globally, a rise in interest rates (and expectations of a further increase as well as a reduction in the US Federal Reserve’s balance sheet) meant that there was a sharp reduction in FII flows. Sample this: Between 2014 and 2017 FIIs pumped in $26 billion into Indian equities. In 2018, they pulled out $13.7 billion. While it’s still early in 2019 they have bought $2billion in Indian equites so far. They’ve been aided by a January 10 statement by US Fed Chairman Jerome Powell stressing that the Fed would be patient in hiking rates further. Add to that lower oil prices and a rupee that has stabilized at around ₹70 mark, there is a feeling that the worst may be over. Indian investors have continued to pump money and SIP flows have risen about 20 percent a month to ₹8000 crore a month in February.

For investors, who for the most part piled onto mid and small cap funds, the fall was swift and unsparing. As investors rushed to sell, individual stocks fell as much as 50 percent and funds were down 20 percent. By January, 80 percent of stocks in the mid and small cap indexes were trading at below their 200 day moving average. This usually points to an oversold market. Even the large cap Nifty was held up by about half a dozen stocks. 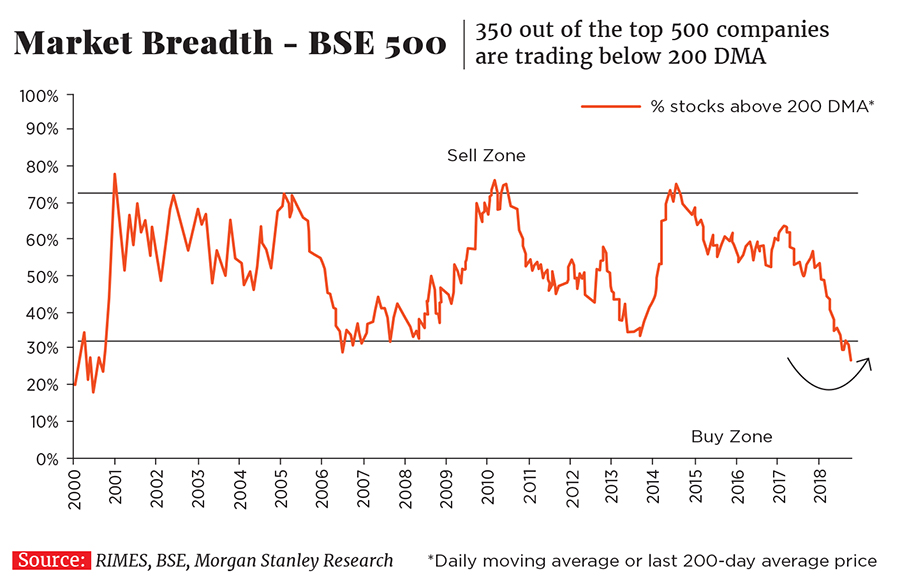 Elections and Beyond
For now market watchers have divided the year into two distinct parts. The consensus is that the markets are unlikely to see significant flows till the formation of a new government. Consensus, however, can and does get it wrong at times. “We could have a scenario where people wait till the elections or that markets rally before and valuations get elevated. It’s tough to say which one plays out,” says Anup Maheshwari, joint CEO and CIO at IIFL Wealth Management.

The market has a poor record of forecasting elections and then reacting to the verdict. In 2004, the market saw a 11 percent sell-off after the results came in but ended the year up 42 percent. In 2009, it hit two upper circuits on election day but did very little over the tenure of UPA2. In 2014, the post-election rise was modest as the market had priced in a BJP victory. The Sensex has risen 8.4 percent a year since the 2014 election. Past evidence points to the fact that after reacting to election results, markets move in tandem with earnings and economic fundamentals in the 12 months after the verdict. 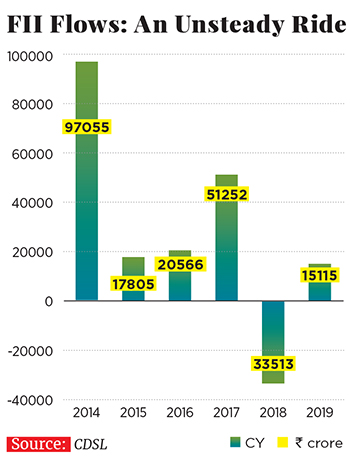 “With midcaps derated we see several opportunities for stock picking,” says Navneet Munot, CIO of SBI Mutual Fund. Unlike other funds, SBI Mutual Fund does not sit on cash and has found several opportunities in the last few months. Munhot sees capital spending rising after the elections and says that should present several buying opportunities. Andrade believes that corporate India has, for the most part, repaired its balance sheets and with capacity utilization ticking upwards it is only a matter of time before entrepreneurs start investing for the next leg of growth. In addition, a benign macro environment is likely to keep the currency and interest rates in check.

The next financial year is also likely to see a better earnings picture. Earnings growth, which has eluded the market for the last five years could begin to tick upwards due to the possible normalisation of telecom and government bank profitability. (There is also the hope that there will not be unexpected earnings shocks, like the recent one from Tata Motors.) Once earnings normalise, the Nifty’s PE multiple, which today stands at 25, would move closer to 20 setting the stage for the next up move.

Add to that a more promising global backdrop—there are indications that the US-China trade dispute is heading towards a resolution and that US interest rates are unlikely to rise quickly.

In the absence of bad news, selling fatigue may be the reason stocks begin to move up. That, for most investors, is as good a reason as any.