How to master situational leadership

A military perspective on building trust up and down the ladder 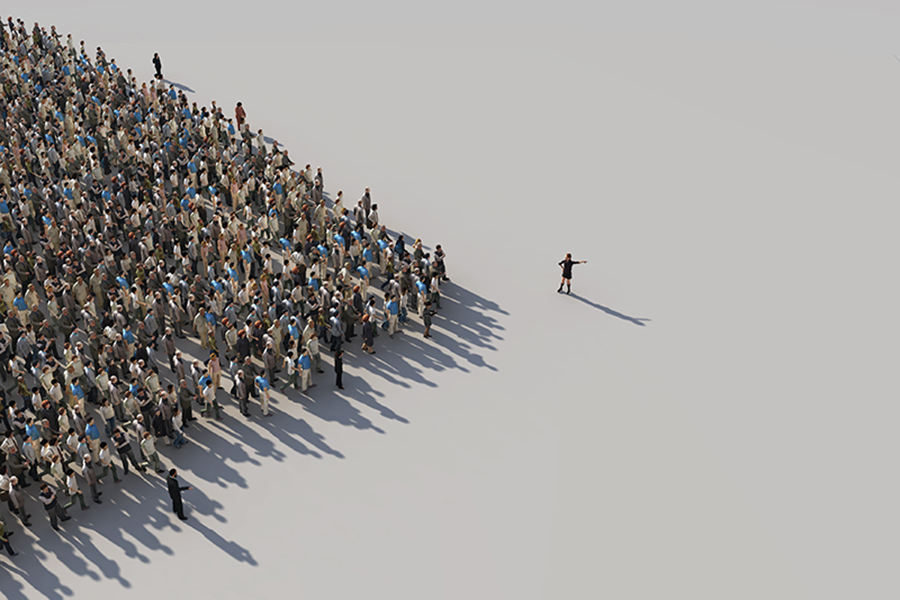 There is a saying repeated often in the U.S. Army: “Where you stand is where you sit.” It means, in essence, that your perspective depends on the position you occupy in an organization.

When 19th century general Braxton Bragg was serving simultaneously as a company commander and company quartermaster—the officer tasked with approving requisitions—he famously wrote a memo in his commander role requesting resources, then wrote a memo as quartermaster refusing that order. Bragg-as-commander appealed, was again refused by Bragg-as-quartermaster, and finally Bragg requested that the post commander intervene and settle the dispute.

Bragg represented an extreme case, but in making each of these decisions, he was looking out for the interests of his team. They were just different teams. His story resonates with Col. Brian Halloran, U.S. Army Chief of Staff Senior Fellow at the Kellogg School, as a reminder of how leadership changes one’s perspective—and how being in one leadership role versus another can have a profound impact on decisions.

For Col. Halloran, more than two decades in the military have included many roles, and many shifts in function. Along the way, he has had to master situational leadership, adjusting his goals to become known as a leader who gets things done.

The tools Halloran uses include recognition and sensitivity, a healthy dose of pragmatism, and the ability to communicate effectively beyond the constraints of a leadership position.

By the same token, becoming versed in the goals and responsibilities of your direct reports—and their direct reports—acts to open communication and increase strategic alignment throughout the organization.

“When you’re circulating and getting to know people in your organization two levels down, you have a better flow of information,” Halloran says. “You can make sure that people understand why certain tasks are being asked to be done, where it fits in the big picture, and how we’re all actually going to benefit.”

When he was a lower rank, Halloran found it easier to do things informally—such as reach out to the people across the organization that he knew could perform. After being promoted to colonel, his ability to approach junior officers who worked under other commanders was seriously curtailed by Army etiquette, which says that if you want to use another commander’s resource—even if that resource is the opinion of a colleague—permission is a must.

The new role did not just change whom Halloran could communicate with—it also shifted how decisions were reached. Halloran learned that failing to coordinate with other colonels or general officers could lead to trouble.

New positions additionally require leaders to make a conscious effort to focus on the job at hand. “You’ve got to be very, very careful not to do the job you used to do, but the job that you’re there to do,” Halloran says.

Breaking Down the Glass Cone
Strong situational leadership skills are not just about taking decisive action, but about getting the detailed information needed to make good decisions. But the more someone ascends in an organization’s leadership, the more the people around him will be inclined to “protect him” from details that that they feel are not worth his time. The problem is that in many cases this amounts to withholding information. Often the withholding stems from a desire to respect a leader’s time—to not bother him or her with pesky details—but it still can isolate the leader from important information. Halloran calls this the “glass cone” of leadership. Breaking that glass cone is essential to making informed decisions.

“Especially the more senior you are in an organization, [the more] you’ve got to ask,” Halloran says. “If you don’t ask the people you’re working with what’s going on in their lives, generally speaking, they’re not going to tell you. And you can’t be the typical guy lost in the middle of the city who doesn’t want to ask for directions.”

If “where you stand is where you sit,” after all, acquiring other perspectives is essential to making decisions that are in the organization’s broader interests.

“Even if you don’t agree with a colleague, when you can understand the why behind it, you can usually find a common ground,” Halloran says. “By doing that, you understand how the whole organization works. That’s when you gain that reputation of somebody who is going to look at a way to solve a problem, not just at a way to further what’s best for your internal cog in the organization.”

ABOUT THE WRITER
Fred Schmalz is the business editor of Kellogg Insight.