Most employees retaliate if they're slighted at work

Here's how managers can break the cycle of office conflict. 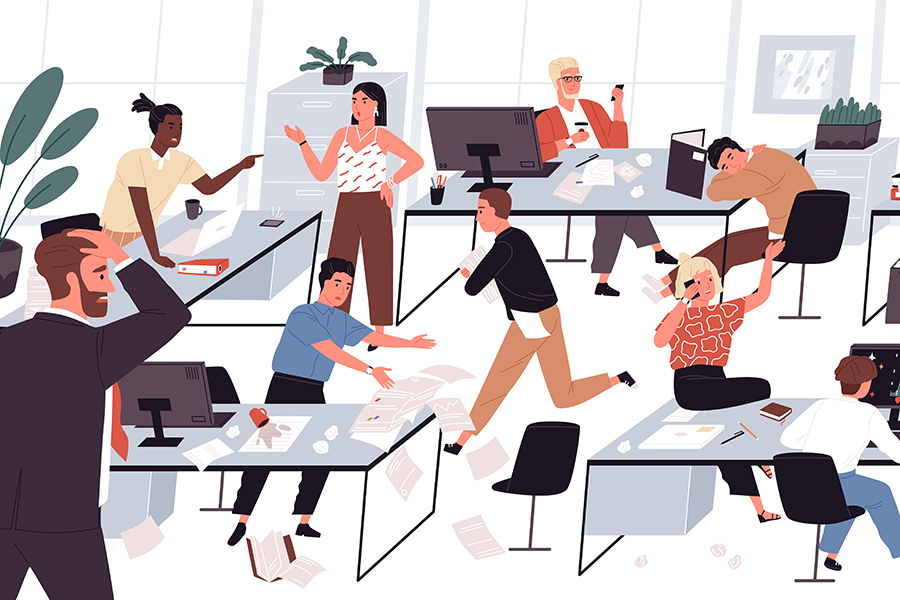 Workplace conflict can wreak havoc on office culture—from gossip that breeds more gossip, to the double-crossing colleagues who find themselves in vicious, never-ending feuds.

How do employees wind up in these cycles of negativity? That is the central question Cynthia Wang, a clinical professor of management and organizations at the Kellogg School, takes up in new research.

Occasional, low-grade naughtiness is a normal part of most workplaces. But when misbehavior becomes endemic, offices overlook it at their own peril.

“It is highly costly to organizations, because it slows down efficiency and hurts morale that’s so key for organizational functioning,” Wang says—not to mention the reputational risks companies face if word of the negative culture gets out.

There is a lot of existing research on so-called negative workplace behavior, a category that includes severe misconduct, like sexual harassment, and more quotidian transgressions, like browsing Amazon when you should be finishing a project.

These studies have mostly focused on individuals, identifying personality or attitudinal trends among the bad apples who perpetrate the offenses. Yet in reality, some of the most intractable workplace misconduct isn’t a solitary pursuit. It involves at least two people: if there’s a bully at the office, there’s also someone being bullied. Wang and her colleagues wanted to capture that broader social context and understand how the targets of workplace behavior respond to a provocation.

The researchers hoped to shed light on a long-standing debate in their field: when people are treated poorly, do they respond in kind (“an eye for an eye”), do they escalate the bad behavior, or do they try to de-escalate and wind it down?

What the researchers discovered was robust evidence that people mostly seek to even the score.

“We find that it’s really more of an-eye-for-an-eye exchange in general, with some evidence of escalation too,” Wang explains. What’s more, the impulse toward giving as good as you get exists whether you’re the target of a subtle slight or a severe transgression.

The research also suggests how managers might more effectively stem bad behavior at its source.

Measuring Office Misconduct
How do you go about studying negative workplace behavior? Because the actions and reactions involved can be so complex, it’s not something the researchers could easily capture in a lab experiment. Instead, they opted for a meta-analysis—culling data from other published studies and putting them to fresh use.

This involved trawling through hundreds of journal articles about workplace misconduct and identifying the ones that captured usable information about negative workplace behavior by one party and how another party responded. In the end, the team’s sample, drawn from 207 studies (most of which collected data via surveys), included nearly 97,000 individuals and represented a diverse pool of industries, including healthcare, the service sector, and government.

The researchers only analyzed cases where more than one person was involved and where they could identify a clear target, whether that target was another person (as in cases of bullying or sabotage) or the organization itself (as in cases of absenteeism or workplace theft).

For each instance of negative behavior, the researchers were also able to determine whether an individual was the perpetrator or the target of the behavior, since this information had been captured by the original studies they aggregated.

The team sorted the data from these published studies into groups, determining whether each behavior was mild, moderate, or severe, as well as whether it was passive (e.g., not showing up for work), active (e.g., screaming at a colleague), or a bit of both (e.g., griping with coworkers behind the boss’s back). They also looked at the target of the behavior—whether it was directed back at the original instigator or displaced onto someone else (“you hurt me and I kick my dog,” as Wang describes it).

Analyzing these dimensions separately allowed the researchers to develop a nuanced portrait of negative workplace behavior and its aftermath. For instance, they could find out if severe misconduct, like sexual harassment, was more likely to yield an escalating response than mild misconduct, like gossiping; or if highly active forms of demeaning behavior, like bullying from a boss, might yield more passive responses, such as calling in sick.

The researchers weren’t sure what patterns would emerge but expected to see a mixture of escalation, de-escalation, and reciprocation, depending on the circumstance.

Payback Time
In the end, what stood out to Wang and her colleagues most was a noticeable tendency toward reciprocal, eye-for-an-eye forms of retaliation across all the different aspects of misconduct they studied.

To analyze how negative workplace behavior influences retaliatory responses, the researchers took average rates of retaliation within a workplace and used them to calculate how frequently comparable degrees of retaliation occur. Their statistical analysis revealed that as any one tier of negative behavior became more common, it was most consistently related to an increase in equal, eye-for-an-eye responses—that is, mild misconduct was most strongly associated with equally mild responses, and severe misconduct was most strongly associated with severe retaliation in response.

However, there was also some evidence for escalation in response to certain kinds of misbehavior. Moderate (but not mild or severe) misconduct was often met with more severe responses, and balanced behavior—that which is not entirely passive, nor entirely active—was associated with more active forms of retaliation.

While the data don’t explain why this is the case, the authors speculate that middle-of-the-road negative behaviors may hit a sweet spot that makes them easier to elevate. “If it’s too mild, that might not be enough to spark escalation,” says Wang.

Analyzing whether people retaliated directly against the original offender or whether their retaliation was displaced proved to be the most challenging, because so few of the studies the team drew from included this information. However, based on the data they had available, the team did notice something intriguing—there was some evidence of de-escalation when retaliation was aimed at the person who had originally wronged you. Essentially, if Joe mistreats Bob, Bob’s retaliation is more likely to be less severe if Joe, rather than another colleague, is his target. This could indicate something about the power relationships at work in these situations, says Wang—for example, a minor slight may be the only form of retaliation you can get away with if the instigator is your boss.

The researchers also looked at demographic factors, such as age, gender, and cultural background, to see if these had any effect on retaliation, but didn’t find any consistent patterns. When it comes to engaging in negative workplace behavior, everyone appears to be on equal footing.

Stopping Retaliation at Work
Wang was surprised by the consistent, robust evidence for reciprocal retaliation as the dominant response to negative workplace behavior.

“I expected ‘an eye for an eye’ to an extent, but I also expected more escalation or de-escalation, depending on the context,” she says.

“If one person is gossiping about someone else, or they’re sabotaging other people in minor ways, if they’re taking their resources or stealing their ideas, there’s going to be a response,” Wang says. “If you stop the one, though, you could stop the other.”