Those without tickets but with thousands of dollars to spare can view games on a big screen from the top deck of a $20,000-a-night yacht, against a backdrop of the Gulf financial hub's skyline 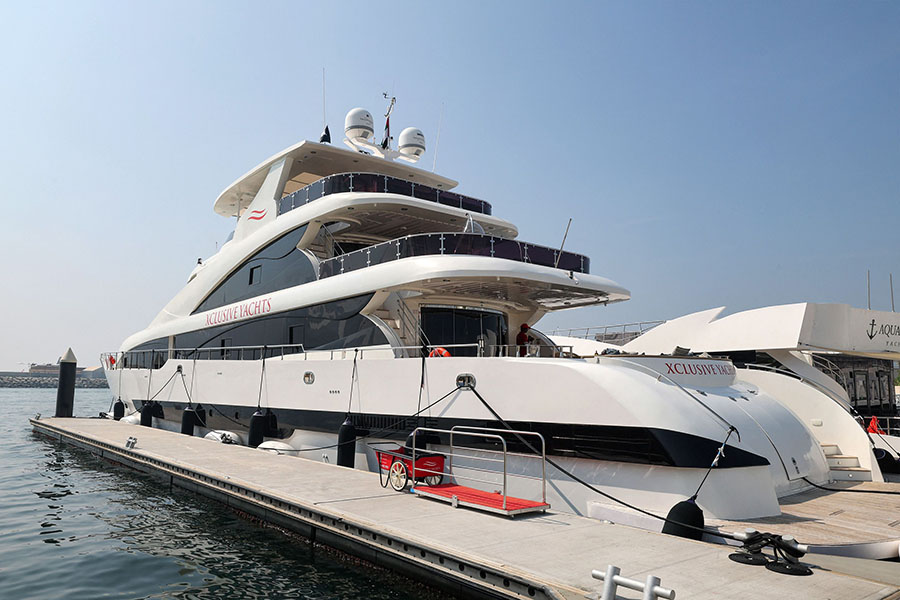 The boat, which can accommodate up to 125 people, is among a number of pristine white yachts at Dubai's Marina Harbour

A fleet of luxurious yachts bobbing in the harbour are among the five-star options as Dubai pulls out all the stops for well-heeled football fans who want to watch the World Cup in style.
Those without tickets but with thousands of dollars to spare can view games on a big screen from the top deck of a $20,000-a-night yacht, against a backdrop of the Gulf financial hub's skyline.
With more than a hint of Dubai's trademark bling, the three-storey, 140-foot (43 metres) vessel has a big screen, jacuzzi, bar and a swanky lounge with L-shaped couches and a glittering crystal leopard statue.

The United Arab Emirates city, an hour's flight from World Cup host Qatar, is among the Gulf destinations expecting to cash in on a spillover of fans seeking more accommodation options and easier access to alcohol.
"This one is for $20,000 for an overnight charter," Xclusive Yachts marketing manager Jainney Thakker told AFP, pointing out the boat's features.
"We have a chef on board who offers gourmet cuisine from all over the world," Thakker added, as well as "free-flowing champagne".
The boat, which can accommodate up to 125 people, is among a number of pristine white yachts at Dubai's Marina Harbour, docked and ready for the influx of fans once the tournament kicks off on Sunday.
In one of its rooms, a large dining table flanked by upholstered chairs and bouquets of white roses is set with glass plates and silver cutlery.
An outdoor jacuzzi offers uninterrupted views from the stern. And for anyone who wants to sail to Qatar during the World Cup, the same company offers a separate package for a cool $100,000 for a roughly six-day trip.

Thakker said her company has received more than 15 nightly bookings so far, mostly for groups of two to three people.
"The people who are booking with us are definitely the real VIPs... you know owners of super-cars, some of the really creme (de la creme) crowd," she said.
On shore, Dubai is gearing up with fan zones at parks, beaches and in the financial centre, while hotels are offering special packages.
Entrance to one fan zone in Dubai Harbour, with 330-square-metre screens, is $21 for a standing space.
But a lounge table for eight people costs more than $920, while a premium suite for 15 is selling for $3,676, including unlimited booze.
The high-end offerings reinforce Dubai's well-cultivated reputation as a luxury destination, an image burnished by a series of reality TV shows including Netflix's "Dubai Bling", an international hit.
The show, following a cast described as millionaires, has topped the platform's viewing lists across the Middle East, although some object to the depiction of a city that is also home to swathes of low-skilled migrant workers.
To coax World Cup fans, the UAE is offering multiple-entry visas at the nominal fee of 100 dirhams ($27) to visiting supporters.
Budget airline flydubai will run at least 30 return flights a day to Doha, part of a daily airlift of 160 shuttle services from Gulf cities laid on for the World Cup.
"Dubai's and to some extent Abu Dhabi's luxury market is probably best placed among the other Gulf economies, excluding Qatar, to benefit from the World Cup," said James Swanston of Capital Economics.
"A more liberal atmosphere relative to other Gulf counterparts ... makes it conducive for tourists to visit," he added.
One Dubai hotel, on the man-made, frond-shaped Palm island, will be given over entirely to football fans.
But it's not all champagne football for fans in Dubai. As a global inflation crisis sends prices soaring, many residents say they will forego World Cup festivities to save on costs.
"I'll subscribe (to World Cup games on TV)... and watch it at home," said Tony, a 36-year-old Lebanese father of one.