With Qatar bracing for the arrival of more than one million fans for the 2022 FIFA World Cup, the camel race track at Al-Shahaniya hopes to get a boost on the back of the world's most popular pastime 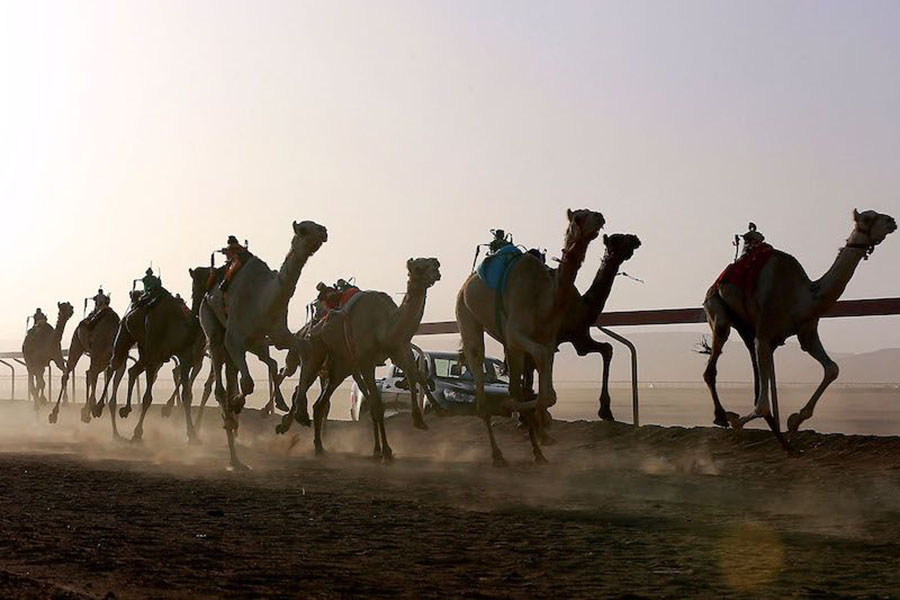 Sitting in a white all-terrain truck, Nasser al-Marri watched his remote-controlled camel race across the Qatar desert and insisted that his sport makes football pale in comparison.

But with Qatar bracing for the arrival of more than one million fans for the World Cup, the camel race track at Al-Shahaniya hopes to get a boost on the back of the world's most popular pastime.

"Camels are a part of us—they're our greatest passion," said the 23-year-old Marri, sitting in a vehicle with three other "mudammer" camel trainers by the track, 40 kilometres (25 miles) east of the capital Doha.

Driving parallel to the track, they control small robot jockeys on the camels' backs and make them pick up speed—a modern innovation to replace the child jockeys who used to perform the dangerous job.

"It's the number one sport in the Gulf," Marri said, even as the four young men—like much of the country—eagerly await the World Cup which kicks off on November 20.

Abdallah Hafiz, 21—who said he will be rooting for the Netherlands—hopes many of the football fans will make it to the track "to discover the sport of our ancestors".

In the back seat of Marri's car, Ahmad Ali, 18, showed a video on his phone of Brazilian superstar Neymar visiting Al-Shahaniya with his Paris Saint-Germain team in 2019 for a special race in their honour.

"I hope Neymar comes back with the rest of his Brazilian teammates, and that other teams come to Al-Shahaniya to discover our national sport and its festive atmosphere," Ali said.

At a small cafe near the track, Ali al-Marri, 66, sipping traditional Arabic coffee, told AFP he went into camel racing "before Doha became what it is today".

He recalled bygone times when there were no race tracks, and competitions were not divided up into categories of size, age and gender.

Jockeys would simply race in gardens and parks near Doha.

His father passed this passion on to him, Marri said, and "now I'm retired" too.

Apart from training the animals, the "mudammer" are also responsible for ensuring the camels' health and well-being.

"It's an expensive sport, but the camels are my whole life," Marri said.

When the race ended, Abu Hussein, a 35-year-old Sudanese man, and other foreign workers took the robot jockeys off the camels and guided the animals back to one of the many stables at Al-Shahaniya.

But for a winning camel, "there's no limit to his price, which can go over one million dollars".

Bets are forbidden in the Islamic country, but jockeys play for valuable prizes usually offered by the ruling family who sponsor this traditional sport.

A $100,000 luxury car is a common prize, but for some national or regional races, it can be "several dozen to 200 vehicles, or even more", Hafiz said.

Up until two decades ago, young children brought in from poor countries were the jockeys. The thinner and lighter they were, the better their chances.

But Gulf states banned that practice, ceding to international pressure, following deadly accidents and abuse by some parents who would deprive their children of food so they did not gain weight.

Now the robots apply the cracks of the whip.

Unlike some of the trainers, the retired Marri said "football doesn't interest me".

"The only sport for me is racing, and when I'm by my camel I feel like the whole world is mine."