76 years old, Mbah Satinem was the Indonesian cultural hub's best-kept secret for decades but is today a cooking sensation after shooting to fame in the 2019 Netflix series "Street Food: Asia" 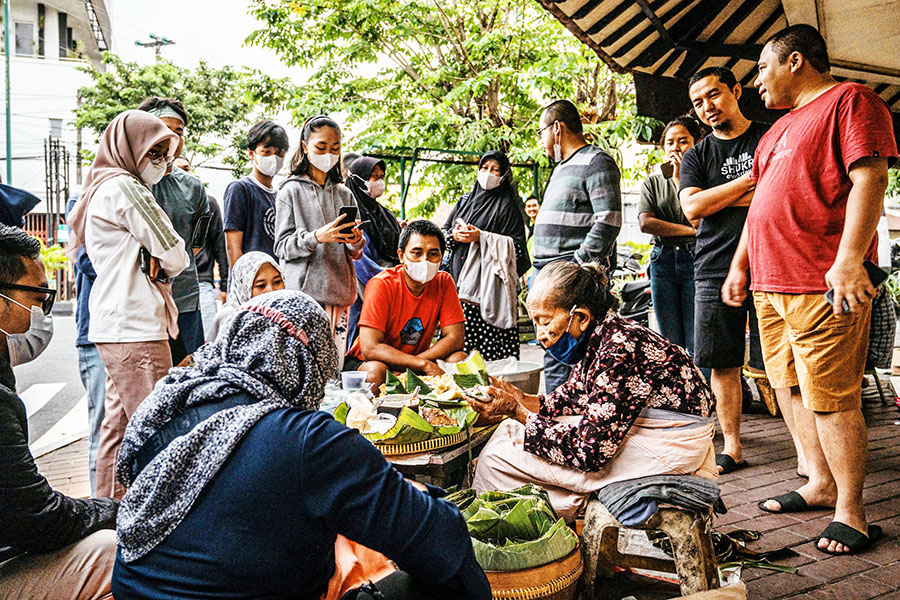 Mbah Satinem was the Indonesian cultural hub's best-kept secret for decades but is today a cooking sensation after shooting to fame in the 2019 Netflix series "Street Food: Asia"

As the morning twilight approaches in an Indonesian city famed for its street food scene, a queue of sleepy customers snakes its way along the road in anticipation of a local culinary legend.
The clock hits 5 am in Yogyakarta and out of the darkness appears a small and frail sarong-clad woman on the back of a black motorbike.
She climbs off slowly, tightly holding a basket that carries the sweet snacks she has been selling for more than half a century.

Now 76 years old, Mbah Satinem was the Indonesian cultural hub's best-kept secret for decades but is today a cooking sensation after shooting to fame in the 2019 Netflix series "Street Food: Asia".
Every day, she opens her stall before dawn and hunches over a table to prepare and dish out traditional market snacks known as jajan pasar.
Displayed on a banana leaf is a selection of treats that includes an Indonesian sweet cake known as lupis made from glutinous rice.
Alongside the star dish is tiwul, which is made using cassava flour, palm sugar and cenil, a worm-shaped tapioca flour jelly.
"I've been selling lupis for a very long time, nothing has changed," she said from the stall she has run since 1963.
"Lupis and I are fated with each other," she added, quietly laughing.

She cuts it with a nylon thread, carefully placing it on the banana leaf before dripping thick liquid palm sugar and sprinkling grated coconut over the breakfast fare.
The secret to the recipe passed down from her mother, she said, is firewood that gives the sweet treat a smokey flavour.
"I used to help my mother making these snacks. When she found me getting better at it, she asked whether I wanted to sell them. I said yes," she said.
"She asked again whether I would feel embarrassed about it, but I said I wouldn't. So, she agreed to make some snacks for me to sell."
Satinem's stall is now surrounded daily by dozens of fascinated customers who watch her every move and document the process with their phones.
"The taste of her lupis is still the same," said 49-year-old Budi, a local who like many Indonesians goes by one name.
"The savouriness and stickiness of the lupis, and the thickness of the brown sauce, it is delicious."
Her version of jajan pasar, sold until 9 am at 10,000 rupiah ($0.67) a pop, has proven so popular that she has introduced a number system for customers after fights broke out over her treats.

Customers who have to wait more than an hour to satisfy their sweet tooth come from all corners of Java, the Indonesian island where Yogyakarta sits in the middle.
One of them is Rama Luhur from the capital Jakarta, who waited nearly two hours to get a taste of the famous lupis after seeing Satinem on Netflix.
"It's worth it. You can find jajan pasar everywhere, but I value her hard work," the 39-year-old told AFP.
That hard work only subsides during the Islamic holy month of Ramadan. But every other day of the year, she rises early to begin her preparation.
"I usually wake up at 1 am in the morning and go to bed after Isha (prayer around 8 pm)," she said.
Due to her age, Satinem's stall is now a family affair.
Her husband is in charge of the sticky rice, her son handles the firewood and her daughter drives her to work and accompanies her through the four-hour shift.
Asked why she refuses to quit what is usually a young person's game, the enduring street food granny brushes off the question with a laugh.
Her daughter Mukinem steps in to answer for the shy chef.
"She likes it, she enjoys cooking the snacks," she said.
"And she can't stay put."

Tweets by @forbesindia
Love letters and tax returns: Bolivia's sidewalk scribes and their typewriters do not distinguish
Our top reads of the week