From Berlin to New York, millions turned to grocery delivery firms during pandemic lockdowns, and the companies gobbled up billions in venture capital and other investment. But worker discontent, a drop-off in investment and reduced demand all suggest a hard landing from the stellar growth of the pandemic era 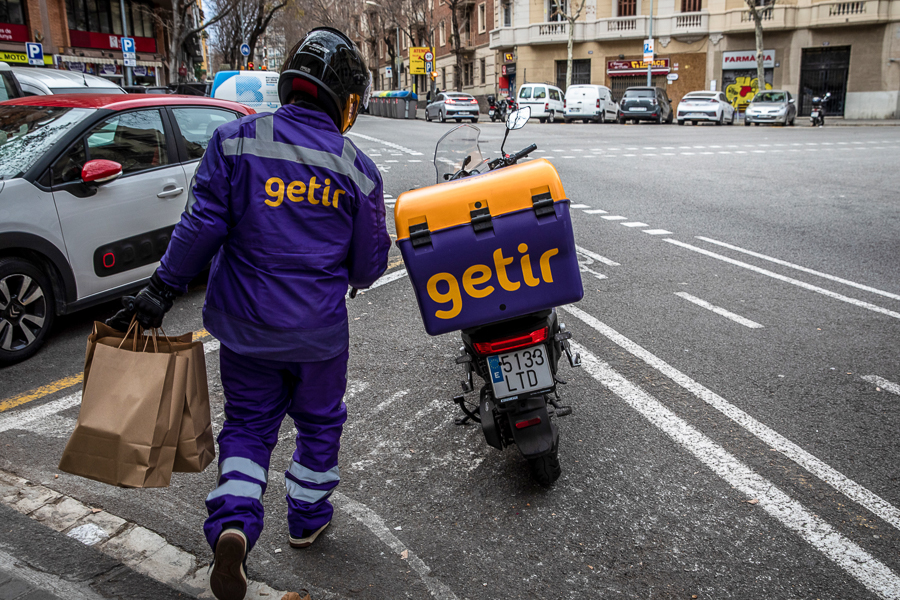 A file photo of a courier for the food delivery service Getir, as he prepares to deliver an order in Barcelona, Spain, on Saturday, Feb. 12, 2022. (Image: Angel Garcia/Bloomberg via Getty Images)

Paris, France: Prathamesh Jathar is one of many brightly dressed riders zipping through the streets of Berlin, dropping off groceries just minutes after the orders come in.
The 25-year-old Master's student from Mumbai could be a poster-child for the multibillion-dollar "quick commerce" sector, but instead he symbolises the malaise.
"Working conditions are terrible," he said, complaining that his employer, Turkish start-up Getir, fails to supply safety equipment or managerial support and did not tolerate unionisation—claims the firm denies.
Worker discontent, a drop-off in investment and reduced demand all suggest a hard landing from the stellar growth of the pandemic era.

Millions turned to grocery delivery firms during pandemic lockdowns, and the firms gobbled up billions in venture capital and other investment.
But Getir recently announced "with a heavy heart" it was letting go 14 percent of its global workforce—several thousand staff.
German-based outfit Gorillas fired 300 people, with its boss in France, Pierre Guionin, telling AFP it was a necessary step "to be stronger and more profitable in the long term".
The path to profitability, though, is beset by potential pitfalls.

"Some of these companies raised too much money and the valuations at which they raised make absolutely no sense," said Hendrik Laubscher, an analyst at Blue Cape Ventures in South Africa.
Getir achieved a valuation of almost $12 billion earlier this year, US start-up Gopuff was valued at $15 billion.
But rising inflation and slowing economic growth have sent investors fleeing from riskier tech investments and left many consumers facing a cost of living crisis.
Smaller firms like Fridge No More and Buyk have gone to the wall, and analysts say some of the remaining platforms have burnt through cash in pursuit of customers and could face a tricky future.
The rapid growth in customer numbers seems likely to end—almost one quarter of Europeans using ultra-fast delivery intend to reduce or end their use of such apps, according to a recent survey by McKinsey consulting firm.
As competition intensifies and firms look for margins, online message boards are abuzz with complaints from staff with all the main platforms, and workers collectives have begun to spring up.
Prathamesh Jahar said the way he was treated amounted to exploitation. Other Getir workers in Berlin said they had similar experiences.
"We reject all allegations," a Getir spokesman told AFP, listing all the equipment and support it offers workers.
He also rebuffed the anti-union label, saying: "The opposite is true: Getir Germany supports the efforts of employees to form a works council."
Getir and Gorillas have made a point of offering workers contracts and moving away from the casual labour associated with the gig economy.

Another difficulty that has beset the industry is a backlash against so-called dark stores— the city centre warehouses the firms use as delivery hubs.
The companies were able to buy shops cheaply during the pandemic but the prospect of shuttered warehouses taking over shopping streets has gone down badly with local authorities in the United States and Europe.
The industry is looking for solutions.
Gopuff, for example, has started to open some of its hubs to shoppers in New York.
So the combative start-ups have essentially become the thing they wanted to destroy.
"If they are just a convenience store that delivers, what is the difference," said Insider Intelligence analyst Blake Droesch.
Also several firms have started to make deals with large supermarket chains, embedding themselves further into the existing ecosystem.

The future of the industry hinges on whether people are willing to pay for ultra-fast delivery.
Analysts and industry figures reckon there is definitely a future for the business.
"The way people get ahead is by offering faster delivery," said Droesch, describing himself as "bullish".
"That is how Amazon got where it is now, they figured out ways to get people products they needed way faster than the other guys."
But some of the claims of disruption and revolution were "marketing gimmicks", said Laubscher, and the future was likely to be slower and less dramatic than promised.
"I don't think it really matters if you get the item delivered in 10 to 20 minutes," he said, describing 60 minutes as perfectly adequate.
Bearing out his analysis, South Korean firm Coupang has nine million customers and runs a profitable business operating a same-day service.
With bigger baskets and smaller promises, Coupang's strategy could show the way for its more unruly Western cousins.
"I can't imagine my life without Coupang anymore," said 35-year-old Lee Seung-yeon, an office worker from Seoul.
"I don't have to walk back home with heavy groceries and it's cheaper."
By Joseph Boyle and Corentin Dautreppe with Glenn Chapman in San Francisco, Thomas Urbain in New York and Cat Barton in Seoul
© Agence France-Presse