BTS tell fans they're taking a break to 'figure things out'

Citing exhausting and pressures of stratospheric success, K-pop megastars BTS told fans they will now focus on solo careers; however, its label HYBE pushed back at the announcement 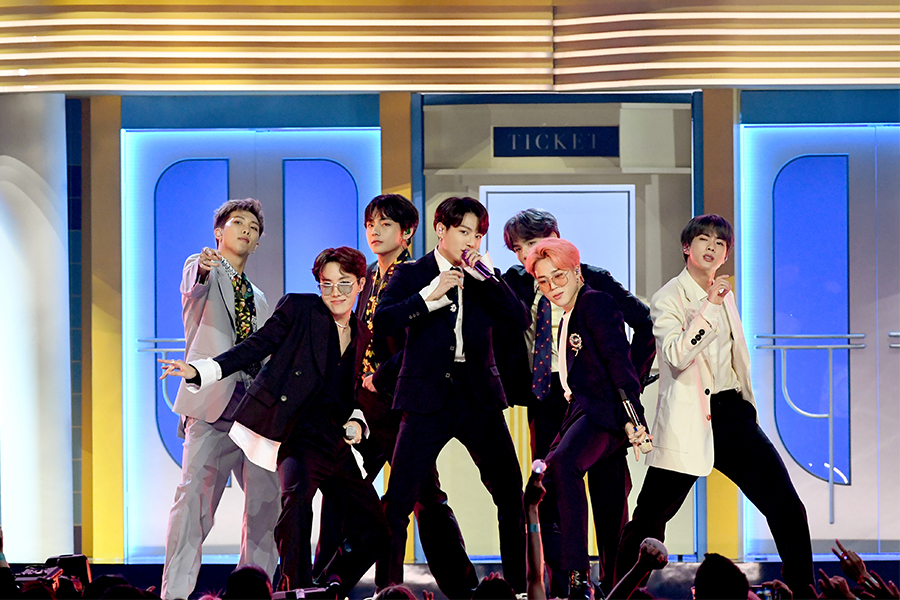 K-pop megastars BTS are taking a break from the supergroup to focus on their solo careers. (Image: Kevin Winter/Getty Images)

Seoul, South Korea: K-pop megastars BTS told fans they were taking a break from the supergroup to focus on their solo careers, citing exhaustion and the pressures of stratospheric success in an emotional video appearance.But the Grammy-nominated septet's label HYBE pushed back on Wednesday as their share price went into freefall, telling AFP that the pop juggernaut would still be working together.
The seven members of BTS, credited with generating billions of dollars for the South Korean economy, dropped the bombshell on Tuesday, telling fans that they were "exhausted" and needed time apart.
"We're going into an off phase now," said Suga, 29, speaking Korean to his bandmates at a group dinner, a video of which was posted to the group's official YouTube channel.
The clip included English subtitles, which used the word "hiatus", but HYBE quickly disputed that, saying group activities would not be suspended.
"They will be doing team and individual projects simultaneously," a representative for the label, whose share price was down 27 percent early Wednesday, told AFP.
In the video, RM, 27, said they were "exhausted" and that they "didn't know what kind of group we were anymore."

"The problem with K-pop and the whole idol system is that they don't give you time to mature," he said, referring to South Korea's notoriously hard-driving music business model.
"Somehow, it's become my job to be a rapping machine," he said, adding that this made him feel "trapped".
"I wanted to shed that for a little bit, but the world wouldn't let me be."
Jimin, 26, said the members are "slowly trying to figure things out now".
"I think that's why we're going through a rough patch right now, we're trying to find our identity and that's an exhausting and long process."

By the end of the dinner, several of the members of the group behind "Dynamite" and "Butter" had grown tearful as they voiced gratitude for their supporters, a fandom known online as the "ARMY".
J-Hope, 28, said the group "should spend some time apart to learn how to be one again".
"I hope you don't see this is a negative thing," the artist implored fans. "And see that it's a healthy plan."
"It's not that we're disbanding—we're just living apart for a while," said Suga.
Jungkook, 24, said, "we promise we will return someday even more mature than we are now", and asked for the "blessing" of fans.
ARMY's online reaction was tearful but supportive, with tens of thousands of comments quickly posted under the YouTube video.
"I can't imagine how much pressure they felt these latest years. Being called the biggest band in the world, having all that responsibility... must be overwhelming," one fan wrote.
"I really love how honest they are here," wrote another.
"They are also people like us. They get exhausted and worn out. They deserve to rest and enjoy what they love to do," the commenter added.
BTS has said they were going on short breaks before, first in 2019 and later in December 2021.
The news comes just days after the group released "Proof", an anthology album that included a new single, "Yet To Come (The Most Beautiful Moment)".
J-Hope, who is slated to headline Chicago's Lollapalooza on his own later this summer, said in the clip that time apart could help BTS "become a stronger group".

BTS's label enjoyed a surge in profits despite holding fewer concerts during the pandemic.
But their messaging around the band's next steps was "confusing" and "not clear", Lee Moon-won, a K-pop culture commentator, told AFP.
"It appears what they meant is BTS will continue their 'supplementary' group activities (such as on YouTube) while pursuing solo careers," he said, while not releasing music as a band.
"It would have been more appropriate had the label first issued a statement clearly detailing what it would mean," Lee said, adding that it was a bad decision to have the band announce the development, which was sure to send fans into a tailspin.
BTS are the first all-South Korean act to reign over Billboard's US top singles chart, a milestone they achieved with "Dynamite", the first BTS song sung completely in English.
They're also one of few acts since The Beatles to release four albums that hit number one stateside in less than two years.
The group has twice been nominated for a Grammy but has yet to win.
BTS recently made headlines for visiting the White House to deliver a message to President Joe Biden on the fight against anti-Asian racism.
By Claire LEE
© Agence France-Presse

Tweets by @forbesindia
What will learning in the metaverse look like?
Quick delivery startups around the world face post-pandemic hangover