'Gangnam Style' impact endures a decade after it broke the internet

Psy's 'Gangnam Style' showed the music industry what could be achieved through internet platforms and social media, especially by artists outside the West who did not perform in English 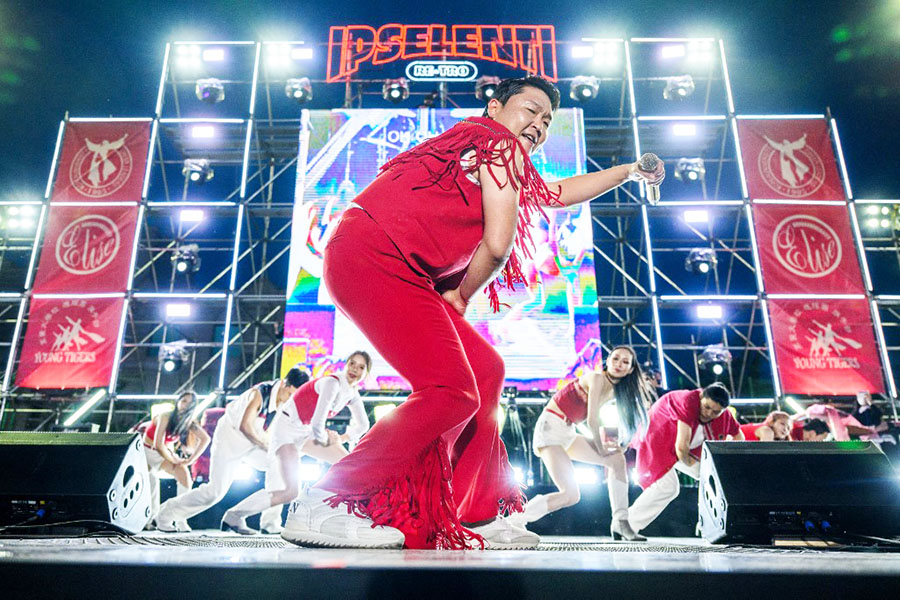 South Korean singer and producer Psy (C) performs his biggest hit song, ‘Gangnam Style’, during a concert at an outdoor venue in the grounds of the Korea University in Seoul, May 27, 2022. Photo: ANTHONY WALLACE / AFP

Seoul, South Korea: When South Korean rapper Psy released "Gangnam Style" a decade ago, few anticipated the scale and speed of its success, and how it would help usher in the streaming revolution.
Its madcap music video with the now-trademark horse-riding dance was released on July 15, 2012. It focused on the local, poking fun at Seoul's wealthy Gangnam district—but within weeks it went global.
By December that year, it had reached one billion views on YouTube. It birthed countless memes and parodies, with the giddy-up dance performed by flash mobs from Azerbaijan to New Zealand.
And "Gangnam Style" showed the music industry what could be achieved through internet platforms and social media, especially by artists outside the West who did not perform in English.

Psy "broke the rules of the game. The traditional marketing and promotional playbooks were essentially thrown out the window," said Bernie Cho, president of the Seoul-based DFSB Kollective artist and label services agency and an expert on the South Korean music industry.
It showed "the importance, the impact, the influence of YouTube on pop music and pop culture worldwide".
In 2012, the streaming industry was still in its infancy, providing less than seven percent of global music revenues, according to industry group IFPI.
But the stunning success of "Gangnam Style"—as well as viral videos from performers such as Justin Bieber and Carly Rae Jepsen—showed a new way for acts from anywhere in the world to not only release music but also tap into online ad revenue, find sponsors and get booked for concerts, analysts say.

A decade later, streaming is the main source of revenue in the global music industry—65 percent in 2021, IFPI reported—with content available online via subscription-based services, YouTube, and short-form video apps such as TikTok.
"Gangnam Style" is "an example of the power that a platform like YouTube could have to create interest in a particular video from a lot of different places in the world," said Michelle Cho, an assistant professor at the University of Toronto who studies Korean pop culture.
"The significance of the video... goes far beyond the content of the video. And it really has more to do with the way that it enabled people to imagine the possibilities of the platform."
Within months of its release, "Gangnam Style" was the most-viewed video on YouTube. It held that spot for more than three years.
As of July 12 this year, it had close to 4.5 billion views.
Such was the online buzz for "Gangnam Style" and viral phenomena such as "Harlem Shake" that Billboard in 2013 changed how it compiles charts, adding streams on YouTube and other platforms to then-mainstream metrics such as radio and sales.
"My one good job, helping K-pop, was changing the rules of Billboard," Psy told AFP during an interview in May, pointing to the popularity of Korean acts on YouTube.

"Gangnam Style" shook South Korea too, becoming the country's biggest cultural export and a source of national pride overnight.
K-pop acts had tried to break into international markets before 2012 with some regional success in Asia, but they had failed to make a mark in huge and lucrative Western markets such as the United States.
And then came Psy, who did not fit the profile of polished K-pop idols.
"Industry executives, government officials, pundits, critics, fans... just assumed that the breakout star from Korea would likely be either a boy band or a girl band," said DFSB's Bernie Cho.
Psy "proved to everybody that instead of a Korean version of a Western pop star or an international pop star, what the world wanted was something very authentic, original, unique."
The horse-riding dance was everywhere—performed on prime-time TV in the United States, in an English football stadium, and by Bollywood stars in India.
Then-US President Barack Obama said his daughters had taught him "a pretty good Gangnam Style".
South Korea is a global entertainment powerhouse today, but in 2012, "Gangnam Style" was the first encounter with Korean pop culture for many audiences.
"It was really influential in perhaps making Korea or Korean music or Korean media more of a common element of general knowledge in lots of places... certainly in the US, but also globally," said scholar Michelle Cho.
"That knowledge, that... familiarity definitely helps other content gain a foothold."
By Qasim Nauman
© Agence France-Presse