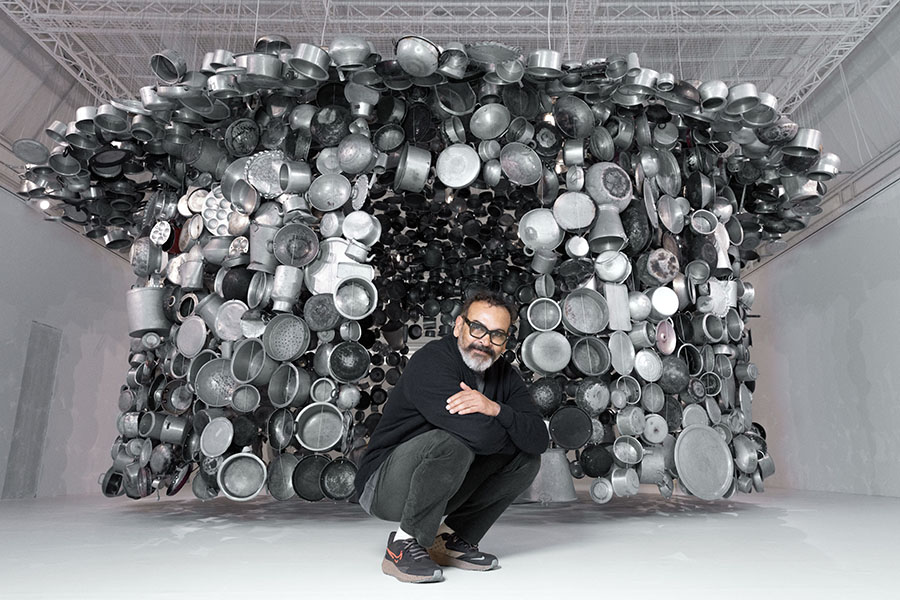 Indian artist Subodh Gupta poses in front of one of his installations. Image: Joel Saget / AFP

For the next few weeks, well-heeled shoppers at Le Bon Marche store in Paris will sniff perfumes and peruse designer dresses in the shadow of vast, three-storey sculptures made from pots and pans.

The unexpected intrusion into one of the city's fanciest department stores—owned by luxury conglomerate LVMH—is the work of India's Subodh Gupta, one of the world's leading contemporary artists.

Among the works from Gupta, who often uses reclaimed utensils and other bits of second-hand furniture in his work, is a 12-metre (40-foot) high sculpture of a bucket (made from aluminium pots) pouring water (made from large mirrors) into its perfume department.

The everyday objects—which reflect Gupta's upbringing in Bihar, one of India's poorest states—make a striking contrast with the ultra-expensive items around it.

"The things I use are not very luxurious," Gupta told AFP.

"I told them I would not compromise my style, but what is good about the Bon Marche is they gave me total freedom to do my work.

"And this way, people who don't normally go to museums and galleries can see it."

Gupta has exhibited around the world, including at the Tate in London and Pompidou in Paris.

Also read: Hong Kong mahjong carver among the last of his kind

Le Bon Marche invites a top artist each year to exhibit in their store and take over their window displays.

On one floor, Gupta has created a traditional Indian hut from dangling, recycled kitchenware.

"I like the idea that all these utensils were used by all these people, that so many people ate food prepared in them. So many people are represented here that it almost reaches into infinity," he said.

Raised in a small village in Bihar, Gupta began his career as an actor in a small theatre troupe before becoming an illustrator.

Moving to Delhi to try his hand at more abstract art, he struggled for several years until a breakthrough when French fashion magnate and art collector Francois Pinault bought one of his sculptures.

Now in his late 50s, Gupta commands millions for his works.

Given the risks of building such vast sculptures in public places, they are painstakingly designed with engineers.

Also read: Curators are saving Ukraine's heritage at all costs

The artworks in the Bon Marche were transported in pieces and assembled "like a puzzle by 30 or 40 people", he said.

"More and more I like these unconventional settings," Gupta said. "Coming from the theatre, I like the performance aspect, as if these artworks are performing for the public."

The exhibition runs at the Bon Marche until February 19.

Tweets by @forbesindia
Shefali Shah: You cannot ignore her, 'darlings'
'Spare' no one? After months of hype, Prince Harry's memoir goes on sale