The UN cultural organisation, UNESCO, says 175 Ukrainian cultural sites have been damaged since the beginning of the invasion. But there are a few braveheart museum curators who are keeping the heritage of the nation to safe 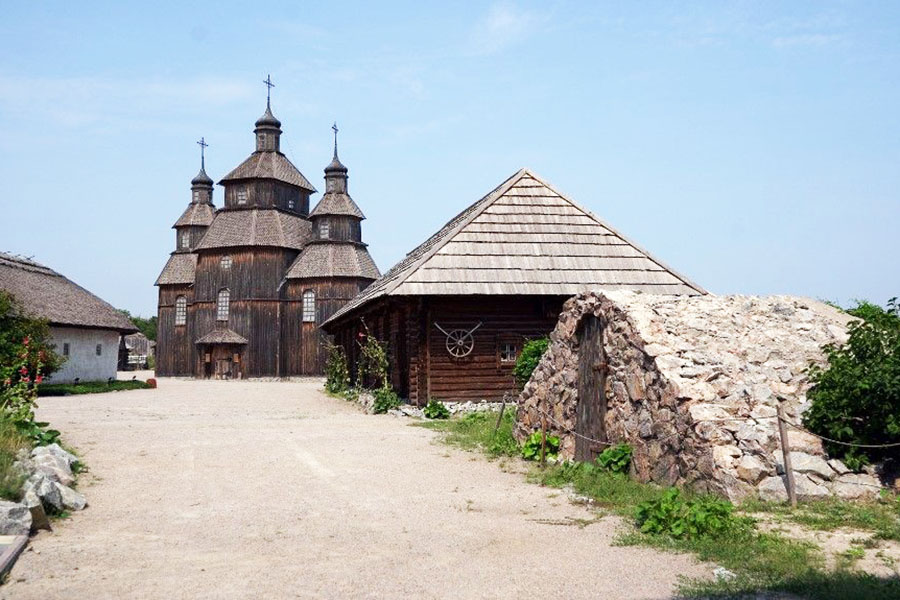 Khortytsia, a museum-island in the Dnipro river of around 30 square kilometres, was a base for Ukrainian Cossacks from the 16th century. Image: Marina Moyseyenko / AFP

When she understood Russian troops were advancing in the region of Zaporizhzhia, Natalya Chergik helped to fill a truck with a ton of paintings, antique firearms and 17th-century ceramics.

"We drove 1,000 kilometres (620 miles) in five days. The trip was awful, planes were flying over us and we did not even know if they were Ukrainian or not," she recounts.

"The hardest part for us was to convince people at checkpoints not to search the artwork and to let the truck through as quickly as possible."

Chergik is a curator at Khortytsia, a museum-island in the Dnipro river of around 30 square kilometres (11.6 square miles) that was a base for Ukrainian Cossacks from the 16th century.

It was the home of the first Zaporizhzhian "Sich"—a type of Cossack state ruled by direct democracy that remained in place until 1775 when Russian empress Catherine the Great destroyed it.

This is a "sacred place for the history of Ukraine", said Maksym Ostapenko, the 51-year-old head of the Khortytsia reserve, an important Ukrainian cultural centre that houses, among others, dozens of historical artefacts found during archaeological excavations over the years.

Ostapenko and most of his colleagues joined the Ukrainian army in the early days of the invasion.

But that does not mean they abandoned their museum.

"To tell you the truth, we outlined an evacuation plan in 2014, after Crimea was annexed" by Russia, said Ostapenko.

Curators drew up a list of "the most precious artwork, of about 100 pieces that would need to be evacuated first, in the event of danger".

"Cultural heritage cannot be rebuilt. We have to take precautions," said the director.

As early as February 23, two days after Russian President Vladimir Putin gave a speech that raised fears of an invasion, the museum's team started to take down the artwork.

When Moscow launched the invasion the following day, evacuation began under Russian shelling.

The Russian army was halted about 40 kilometres from Zaporizhzhia and did not take over Khortytsia. Three rockets hit the island, but did not damage the museum.

But Russia quickly took over the "Kamianska Sich", a similar but autonomous polity.

A branch of the museum is located there.

"The staff is blocked from accessing the site. And we lost contact with our colleagues a while ago," Ostapenko said.

The UN cultural organisation, UNESCO, says 175 Ukrainian cultural sites have been damaged since the beginning of the invasion.

The Ukrainian culture ministry estimates that about 100 museums and 17,000 cultural objects are in occupied territories.

About 60 kilometres from Khortytsia is the city of Vasylivka, which was taken over by the Russian army in the first days of the war.

The city is home to the Popov manor, an unusual 19th-century neo-gothic mansion that was damaged by shelling in early March.

A part of the museum's team decided to stay.

Its director, 39-year-old Anna Golovko, lives in Zaporizhzhia, but tries to stay in contact with her colleagues.

"They're doing everything they can to preserve the buildings, but that remains extremely difficult. As soon as they cover up a window, it gets blown up by another shelling," she said.

The museum's team did not have time to evacuate the artwork. As early as the day following the fall of the city, Golovko said Russian troops went to the museum to loot it.

Two of her colleagues were even detained for four days earlier this month, and asked to reveal the location of the artwork, according to Golovko.

As for Chergik, she came back to Zaporizhzhia after her long journey to take away artwork for safekeeping in the west of the country.

She said the fate of Ukraine's heritage, particularly in occupied areas, is a "painful and ever-present" issue for her.

"If we don't save our cultural heritage, then Ukraine's victory won't be worth a thing."