How India's largest-selling packaged water brand, Bisleri, is fighting fakes—riding on camels in its advertisements 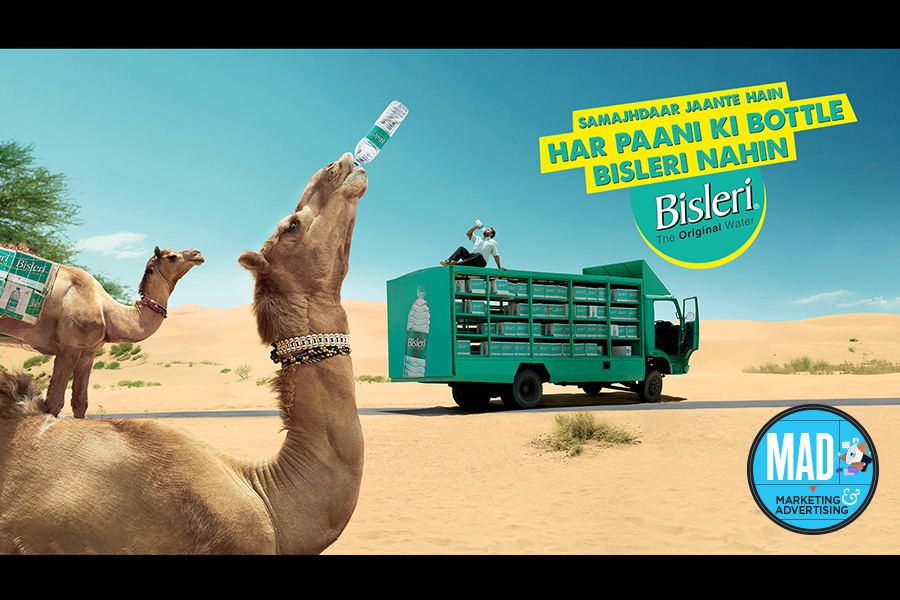 At times, the greatest strength of a brand threatens to become its biggest weakness. Nobody perhaps knows this better than Bisleri, the largest selling packaged water brand in India. “The paradigm of being identified with the category, though an advantage, has posed a big challenge for us,” says Anjana Ghosh, director of Bisleri International. The reasons are not hard to fathom.

The packaged water category, pegged at about ₹14,000 crore and estimated to grow at a compound annual growth rate (CAGR) of 20 percent, is highly unorganised, and littered with ‘one litre’ bottles of Bisleri lookalikes. About 65 percent of the market is infested by over 3,000 local labels, most of which try to ape the leader. Sample this: Birseli, Beesleri, Bisleeri, Bislleri…the fake or me-too avatars of Bisleri are several. What they have in common is the signature green label, similar font and price. The biggest difference, though, is the name, and quality, as the fake names try to piggy-back on the popularity of the leader.

Finding itself in hot water, Bisleri rolled out dual-language labels in local languages across different pack sizes two years ago. The idea was simple: Regional languages would help build emotional connect with the consumers. While it helps them read and understand the language they are most comfortable with, Ghosh reckons it will also help them spot the difference between fakes and look-alike.

The problem, though, persisted. In a category as universal and homogeneous as bottled water, differentiating between locals and brands becomes difficult for consumers. “Although consumers ask for Bisleri, they eventually settle for any bottle of water handed to them by the retailer,” says Ghosh. The last-mile truth is that at the retailer level, a consumer is often given whatever the shopkeeper fancies.

Armed with this insight, Bisleri launched a brand campaign in October that proclaimed, “Har paani ki bottle Bisleri nahi” (every bottle of water is not a Bisleri). Camels, interestingly, were selected as protagonist to drive home the message. Depicted as consumers, camels turned the tables on a wily shopkeeper who tries to pass off some other brand of bottled water as Bisleri. The objective, Ghosh underlines, was to make consumers aware that not every bottled water is Bisleri or as pure and safe as Bisleri.

Cut to April 2019. Buoyed by the success of the previous campaign, Bisleri has rolled out a sequel of the camel commercial.

This time, the story revolves around a mother and her baby camel, where the former does not settle for any other source of water for her baby except Bisleri. In another commercial, the brand uses a caravan of camel-dacoits who hold up and loot a Bisleri truck. The campaign, says Ghosh, will not only address the counterfeit product issues, but also translate into annual sales growth. The latest campaign, pushed heavily through above-the-line (ATL) and digital mediums, is backed by supporting point of sale materials planted at the retailers and modern trade outlets. The idea still remains the same: Reminding consumers that every bottled water is not Bisleri.

Animals, say marketing experts, sometimes carry more credibility than humans. When a camel can spot the difference between a genuine Bisleri and a fake one, and smartly proclaims itself not to be a ‘donkey’ to be misled, the message is clear: Donkeys buy fake bottles. “When nothing works, try insulting smartly,” says Abraham Koshy, professor of marketing at IIM-Ahmedabad. Brands are wary of making fun of consumers. But when it happens in a ‘smart’ manner, it can do wonders.
Using animals for creative exploration works in three ways. Firstly, people take notice of it. Secondly, it’s more credible than using cartoons. And lastly, the message gets prominence. Pleading consumers not to buy fakes doesn’t work. “Camels labeling those opting for fakes as donkeys is more insulting than a direct insult,” avers Koshy. “The message is conveyed powerfully.” The challenge for the brand, though, is to follow-up the ‘smart’ campaign with an ‘aggressive and strong’ on-ground activation among small mom-and-pop stores, and with millions of makeshift shops selling bottled water in small towns and cities. “Unless steps are taken to incentivise them to stop selling fakes, camels will find it hard to ‘tame’ donkeys,” says Ashita Aggarwal, marketing professor at SP Jain Institute of Management and Research. The menace of fakes, she says, has to be confronted on all levels. Though Bisleri created a ‘brand’ out of commodity—water—the stickiness is still not strong with consumers who get easily influenced by price, availability and lethargy.  Ghosh, for her part, would hope that the ‘camel’ would eventually outsmart the ‘donkey.’