Four banks in central China's Henan province suspended cash withdrawals in April as regulators cracked down on mismanagement, freezing the funds of hundreds of thousands of customers and sparking protests that at times ended in violence 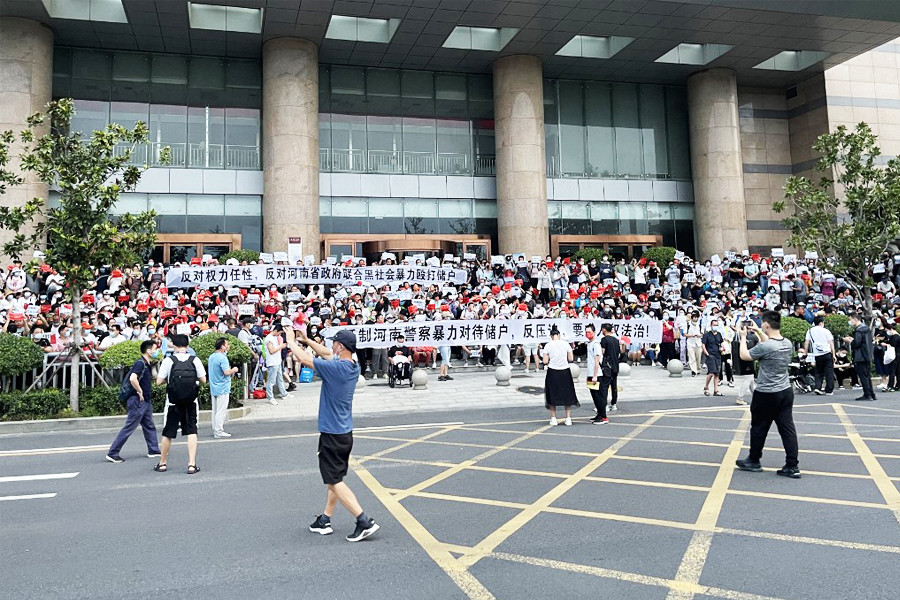 This handout photo taken on July 10, 2022 and released by an anonymous source shows people protesting in front of a branch of the People's Bank of China in the central Chinese city of Zhengzhou. Image: Handout / Courtesy Of An Anonymous Source / AFP

Beijing, China: Chinese police have arrested more than 200 suspects linked to one of the country's biggest-ever banking scandals, which triggered rare mass protests.
Four banks in central China's Henan province suspended cash withdrawals in April as regulators cracked down on mismanagement, freezing the funds of hundreds of thousands of customers and sparking protests that at times ended in violence.
Police said Monday they had now arrested 234 people in connection with the scandal and that "significant progress" was being made in recovering stolen funds.
"A criminal gang... illegally controlled four village and town banks... and was suspected of committing a series of serious crimes," police in the city of Xuchang said in a statement on Monday.

China's rural banking sector has been hit hard by Beijing's efforts to rein in a property bubble and spiralling debt in a financial crackdown that has had ripple effects across the world's second-largest economy.
Regulators have been gradually offering repayments to depositors since mid-April.
On Monday, the Henan banking and insurance regulator promised to repay those who had deposited between 400,000 and 500,000 yuan ($57,900 to $72,300) starting this week.
Depositors who owed smaller amounts were repaid earlier.
The size and scale of the fraud dealt an unprecedented blow to public confidence in China's financial system, analysts have said, with the banks involved allegedly operating illegally for more than a decade.
A July 10 mass demonstration by depositors in Henan's provincial capital, Zhengzhou, was violently quashed, with demonstrators forced onto buses by police and beaten, according to eyewitness accounts given to AFP and verified photos on social media.
© Agence France-Presse

Tweets by @forbesindia
Why are US companies hoarding so much cash?
News18 Network and Truecaller's joint initiative to create awareness on harassment culminates with hope for change