In a show of support, European Union leaders agreed Thursday to grant candidate status to Ukraine, as well as Moldova, although the two former Soviet republics face a long path before joining the bloc 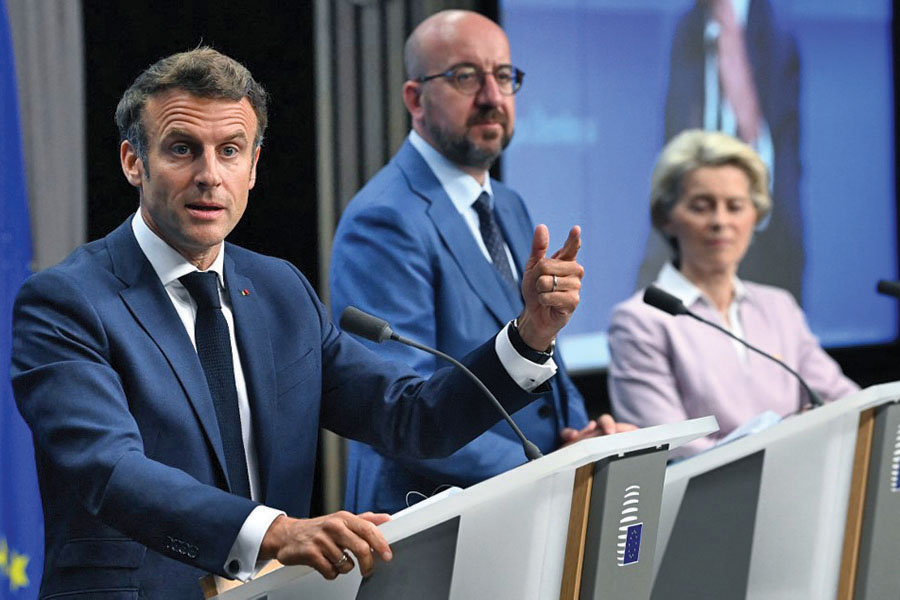 Brussels, Belgium: EU leaders granted "candidate status" to Ukraine in its bid to join the bloc, as tensions deepened over Russian gas supplies and Moscow's forces closed in on key cities.

Russia is focusing its offensive on the eastern Donbas region, after being pushed back from Kyiv following their February invasion, and its troops are making steady advances despite fierce Ukrainian resistance.

In a show of support, European Union leaders agreed Thursday to grant candidate status to Ukraine, as well as Moldova, although the two former Soviet republics face a long path before joining the bloc.

Ukraine's President Volodymyr Zelensky hailed the news as "a unique and historic moment", adding: "Ukraine's future is within the EU."

French President Emmanuel Macron said that the decision by EU leaders sent a "very strong signal" to Russia that Europeans support the pro-Western aspirations of Ukraine.

President Vladimir Putin had declared Ukraine to be part of Moscow's sphere and insisted he was acting due to attempts to bring the country into NATO, the Western alliance that comes with security guarantees.

European powers before the invasion had distanced themselves from US support for Ukraine's NATO aspirations and EU membership is at least years away.

Ukraine and Moldova will have to go through protracted negotiations and the European Union has laid out steps that Kyiv must take even before that, including bolstering the rule of law and fighting corruption.

Russian troops were pressing their advance in the east, tightening their grip on strategically important Severodonetsk and its twin city Lysychansk across the Donets river.

Taking the cities would allow Russia to press further into the Donbas region, and potentially farther west.

Ukraine acknowledged Thursday that it had lost control of two areas from where it was defending the cities, with Russian forces now closer to encircling the industrial hubs.

Street fighting has raged for weeks in Severodonetsk, with Ukrainian forces controlling only the industrial zones of the city.

But Sergiy Gaiday -- governor of the Lugansk, which includes Severodonetsk -- warned that Ukrainian forces faced "relentless shelling" and may have to withdraw further.

"There has been too much damage now, and probably even a retreat might be needed to new fortified positions," he said.

A representative of pro-Russian separatists in Ukraine told AFP the resistance of Ukrainian forces trying to defend Lysychansk and Severodonetsk was "pointless and futile."

"At the rate our soldiers are going, very soon the whole territory of the Lugansk People's Republic will be liberated," said Andrei Marochko, a spokesman for the Moscow-backed army of Lugansk.

AFP journalists driving out of Lysychansk Thursday twice had to jump out of cars and lie on the ground as Russian forces shelled the city's main supply road.

They saw dark smoke rising over the road ahead, and heard artillery fire and saw flashes of light, while the road was strewn with trees felled by shelling.Also read: Military aid for Ukraine: Who has sent what?

The situation for those that remain in the city was increasingly bleak.

Liliya Nesterenko said her house had no gas, water or electricity and she and her mother were cooking on a campfire. She was cycling along the street, and had come out to feed a friend's pets.

But the 39-year-old was upbeat about the city's defences: "I believe in our Ukrainian army, they should (be able to) cope.

With Ukraine pleading for accelerated weapon deliveries, the United States announced it was sending another $450 million in fresh armaments, including Himars rocket systems.
The systems can simultaneously launch multiple precision missiles at an extended range.

Western officials have also accused Russia of weaponising its key exports of gas as well as grain from Ukraine, contributing to global inflation and rising hunger in the world.

A US official warned of new retaliatory measures against Russia at the Group of Seven summit being attended by President Joe Biden in Germany starting Sunday.

Germany ratcheted up an emergency gas plan to its second alert level, just one short of the maximum that could require rationing in Europe's largest economy, after Russia slashed its supplies.Also read: Europe's Russian oil ban could mean a new world order for energy

"Gas is now a scarce commodity," German Economy Minister Robert Habeck told reporters, urging households to cut back on use. Demand for gas is lower in the summer but shortages could cause heating shortages in the winter.

France is aiming to have its gas storage reserves at full capacity by early autumn, and will build a new floating methane terminal to get more energy supplies by sea, French Prime Minister Elisabeth Borne said.

A Kremlin spokesman reiterated its claim that the supply cuts were due to maintenance and that necessary equipment from abroad had not arrived.by Christian SPILLMANN, with Benoit FINCK in Kyiv and Anna MALPAS in the Donbas