Some who have lobbied to have the memoir removed from schools say they have no issue with the author's story or identity. It's the sexual content in "Gender Queer" that is not appropriate for children or school libraries 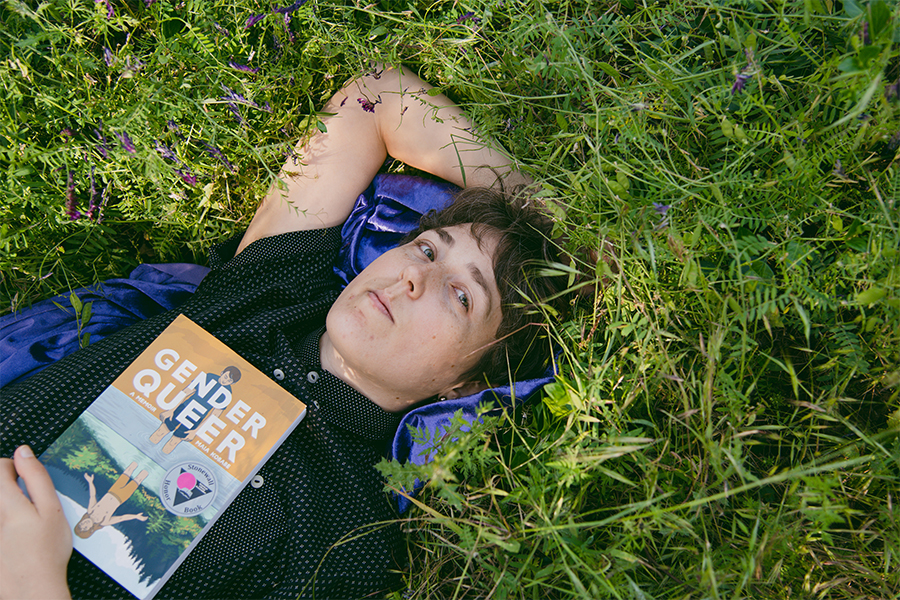 Maia Kobabe, the author of the graphic novel and memoir “Gender Queer,” in Santa Rosa, Calif., April 25, 2022. The book about coming out nonbinary has landed the author at the center of a battle over which books belong in schools, and who gets to make that decision. (Marissa Leshnov/The New York Times)

Coming out as bisexual in high school had been relatively easy: Maia Kobabe lived in the liberal San Francisco Bay Area and had supportive classmates and parents. But coming out as nonbinary years later, in 2016, was far more complicated, Kobabe said. The words available failed to describe the experience.

“There wasn’t this language for it,” said Kobabe, 33, who now uses gender-neutral pronouns and doesn’t identify as male or female. “I just thought, I am wanting to come out as nonbinary, and I am struggling with how to bring this up in conversation with people. And even when I am able to start a conversation about it, I feel like I am never fully able to get my point across.”

So Kobabe, an illustrator who still lives in the Bay Area, started drawing black-and-white comics about wrestling with gender identity and posting them on Instagram. “People started responding with things like, ‘I had no idea anyone else felt this way; I didn’t even know that there were words for this’,” Kobabe said.

Kobabe expanded the material into a graphic memoir, “Gender Queer,” which was released in 2019 by a comic book and graphic novel publisher. The print run was small — 5,000 copies — and Kobabe worried that the book wouldn’t find much readership.

Then, last year, the book’s frank grappling with gender identity and sexuality began generating headlines around the country. Dozens of schools pulled it from library shelves. Republican officials in North and South Carolina, Texas and Virginia called for the book’s removal, sometimes labeling it “pornographic.”

Suddenly, Kobabe was at the center of a nationwide battle over which books belong in schools — and who gets to make that decision. The debate, raging in school board meetings and town halls, is dividing communities around the country and pushing libraries to the front lines of a simmering culture war. And in 2021, when book banning efforts soared, “Gender Queer” became the most challenged book in the United States, according to the American Library Association and free speech organization PEN.

Many of the titles that have been challenged or banned recently are by or about Black and LGBTQ people, both groups said.

“ ‘Gender Queer’ ends up at the center of this because it is a graphic novel and because it is dealing with sexuality at the time when that’s become taboo,” said Jonathan Friedman, director of free expression and education at PEN America. “There’s definitely an element of anti-LGBTQ+ backlash.”

Some who have lobbied to have the memoir removed from schools say they have no issue with the author’s story or identity. It’s the sexual content in “Gender Queer” that is not appropriate for children or school libraries, they say.

“It’s not a First Amendment issue; this is not going against LGBTQ groups; we’re citing it for sexually explicit content,” said Jennifer Pippin, a nurse in Sebastian, Florida, and chairman of Moms for Liberty in Indian River County, where “Gender Queer” was banned from school libraries in the fall after Pippin filed a complaint.

The recent spike in book challenges has been amplified by growing political polarization, as conservative groups and politicians have focused on titles about race, gender and sexuality, and framed book banning as a matter of parental choice. Liberal groups, free speech organizations, library associations and some student and parent activists have argued that banning titles because some parents object to them is a violation of students’ rights.

The American Library Association counted challenges against 1,597 individual books last year, the highest number since the group began tracking book bans 20 years ago. In many cases, the titles that have been pulled aren’t mandatory reading but are simply available on library shelves.

Kobabe, who was raised as a girl, started questioning that identity as a child. Once, during a field trip in the third grade, Kobabe went topless to play in a river and was scolded by a teacher. Another time, Kobabe was secretly happy when another child in elementary school yelled, “What even are you, a boy or a girl?”

Kobabe found solace in drawing, David Bowie songs and fantasy series like “Harry Potter” and “Lord of the Rings,” and developed crushes on both boys and girls.

In 2016, Kobabe began coming out to friends and family as nonbinary and using the gender neutral pronouns e, eir and em. Kobabe’s parents, both teachers, were supportive but also confused at times. To explain what it felt like to be nonbinary, Kobabe started drawing the images that eventually became the basis for “Gender Queer.”

Kobabe imagined the memoir would appeal mainly to young adults who had also wrestled with gender identity, and to friends and family of nonbinary people. The book’s publisher, Lion Forge, marketed it toward older teens and adults. But it soon found a younger audience. In 2020, it won an Alex Award, a prize given by the American Library Association to books written for adults that hold “special appeal to young adults, ages 12 through 18.”

The award brought “Gender Queer” to the attention of librarians across the country, who often look to such prizes when deciding what books to order. High schools and some middle school libraries around the country began stocking it. On Amazon, it’s listed as appropriate for ages 18 and up; on Barnes & Noble’s website, it’s recommended for readers 15 and older.

It appeared on a list of books deemed sexually explicit that was circulated among members of Moms for Liberty, a nonprofit formed in 2021 to push for “parental rights in schools” that has been helping to drive book banning efforts. Pippin first heard of “Gender Queer” when she saw it listed on the group’s Facebook page in October. She searched for it in her school library system and found there were copies in multiple middle schools and high schools, including the schools that her 13- and 17-year-old children attend, she said.

“Any 10- or 17-year-old could just check out that book,” Pippin said. “This could do damage to children if they don’t know what’s in it.”

She made a complaint to the school board, and shortly after, the book was removed. After a review, it was permanently banned.

In some communities, divisions over “Gender Queer” have been deep and painful.

This spring, after a member of Moms For Liberty submitted a complaint about “Gender Queer” to the Wappingers Central School District in upstate New York, the book was removed from a high school library. It had never been checked out. A committee of teachers, parents and educators reviewed it, and determined that it was not inappropriate and should be returned. The superintendent, citing sexually explicit images, overruled the committee and brought the issue to the school board, which voted unanimously to uphold the ban.

At a recent school board meeting, a group of students and parents denounced the ban, with one person arguing the book could be a lifeline for young people who are exploring gender identity and whose families are unsupportive. Others called the book pornographic and inappropriate.

“People in the LGBTQ+ community and in minority groups use these books as an outlet and a way to connect to the world to feel support,” Zhang said at the school board meeting. “This book ban silenced these groups, these people, resulting in making them not feel valid.”

Zhang started a petition to reverse the ban and within a week got more than 1,000 signatures. She’s starting a banned book club at her local library and is planning a fundraiser to buy and distribute free copies of “Gender Queer.” But in her school district’s libraries, the book is no longer available.

Tweets by @forbesindia
For the long run: Meet the last-mile boys of rural India
21Shares and ByteTree launch a gold-cum-Bitcoin ETP