How LinkedIn became a place to overshare

Since the start of the pandemic, as office workers missed in-person interactions with colleagues, many people turned to LinkedIn to help make up for what they had lost, and the lines between work and personal updates became blurry 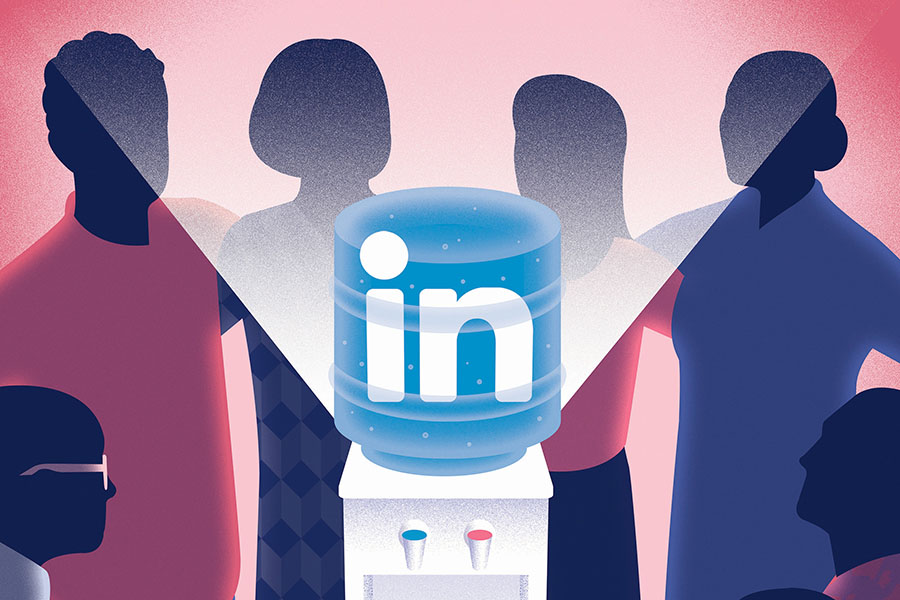 “This isn’t Facebook,” users of LinkedIn complain. But others are finding it a valuable place to talk about much more than work. (Neil Webb/The New York Times)

About three years ago, Joel Lalgee started posting on LinkedIn. He works in recruiting, so naturally, he spent a lot of time on the site, where people list their work experience and job seekers look for their next gig. But he didn’t just write about work. He wrote about his personal life: the mental health challenges he faced as a teenager, and his life since. “Being able to share my story, I saw it as a way to connect with people and show you’re not alone,” he said.

Something else happened, too. “Six months in, I started seeing a big increase in engagement, followers, inbound business leads,” said Lalgee, 35. He now has more than 140,000 followers on LinkedIn, up from the 9,000 he had before he started posting.

“The way you can go viral is to be really vulnerable,” he said, adding, “Old school LinkedIn was definitely not like this.”

LinkedIn, which was started in 2003, was first known primarily as a place to share résumés and connect with co-workers. It later added a newsfeed and introduced ways for users to post text and videos. The site now has more than 830 million users who generate about 8 million posts and comments daily.

Since the start of the pandemic, as office workers missed in-person interactions with colleagues, many people turned to LinkedIn to help make up for what they had lost. They started talking about more than just work. The boundaries between office and home lives became blurrier than ever. As personal circumstances bled into workdays, people felt emboldened to share with their professional peers — and found interested audiences both in and beyond their networks.

Users, including some who had left Facebook or felt guilty about using it during work, found they could scroll through LinkedIn and still feel that they were working. And for those hoping to make a splash and build an audience, LinkedIn proved an easier place to get noticed than more saturated sites. Karen Shafrir Vladeck, a recruiter in Austin, Texas, who posts frequently on LinkedIn, said the site was “low-hanging fruit” compared with crowded platforms such as TikTok and Instagram.

During the pandemic, many people also wanted to post about social justice topics that, while far from the historically staid fare of the site, affected their work lives: In 2020, Black LinkedIn took off with posts about systemic racism. “After the murder of George Floyd, a lot of folks were like, ‘I know this is unusual LinkedIn talk, but I’m going to talk about race,’” said Lily Zheng, a diversity, equity and inclusion consultant. This summer, after the Supreme Court ruling on abortion, some women posted their own abortion stories.

Now, users find on a typical day that between job listings and “I’m happy to announce” posts are viral selfies of people crying, announcements about weddings and long reflections about overcoming illnesses. Not all are happy about the changes. Some said they find they cannot use the site in the same way. A newsfeed crowded with personal posts, they said, can distract from the information they seek on LinkedIn.

“Early in the pandemic, we started seeing content we really hadn’t seen before,” said Daniel Roth, a vice president and the editor-in-chief of LinkedIn. He said he noticed people posting about mental health, burnout and stress. “These were unusual posts for people where they were being much more vulnerable on LinkedIn,” he said.

It wasn’t as if no one had broached those topics on the site before but, Roth said, it was “nothing like the volume” that LinkedIn started seeing in the spring of 2020, and continued seeing over the next two years.

LinkedIn is not encouraging, or discouraging, the intimate posts. “In terms of the personal content, I wouldn’t say that we got too involved there,” Roth said. But it is encouraging influencers to join the site in the hope that they will post about topics such as leadership. The company walks a fine line, as it tries to encourage engagement on the site while protecting the professional context that it says its users expect. Roth said posts about skills and work accomplishments — more classic office fare — have seen increased engagement in the past year.

In a survey of about 2,000 employed adults this year, LinkedIn found that 60% said their definition of “professional” had changed since the start of the pandemic.

As is true in a workplace, sharing personal information on LinkedIn can foster a sense of belonging — but it can also lead to regrets. Zheng, who has more than 100,000 followers on LinkedIn, said companies are asking, “How much disclosure is allowed under this changing definition of professionalism? It’s not an answer that exists yet.”

“There is a tension here. On the one hand, we want to support workers’ self-expression and self-disclosure,” Zheng said. But, at the same time, they added, workers should feel free to maintain boundaries between their personal and work lives, including on LinkedIn.

Over the past couple years, LinkedIn has been trying to encourage content that will keep users engaged on the site: Last year, LinkedIn started a creator accelerator program to recruit influencers. A spokesperson for LinkedIn, Suzi Owens, said it was rolling out new tools and formats for posting.


Last year, Lalgee started to feel ambivalent about the attention he got from his personal posts. He wondered whether the hope of reaching a wide audience was leading people to share more than they should, or even to post emotional stories for attention. “It creates almost a false sense of vulnerability,” he said. “And then it becomes really hard to know, is this person genuine, or are they just doing it to go viral?”

Owens said the company plans to continue rolling out product changes to ensure that people see relevant content in their feeds. “What’s unique about LinkedIn is that it’s not creation for the sake of entertainment — it’s about creation for economic opportunity,” she said.

Tweets by @forbesindia
NFTs will bring crypto worth billions: Avichal Garg
Mumbai likely to be one of the wealthiest cities in the world by 2030: report