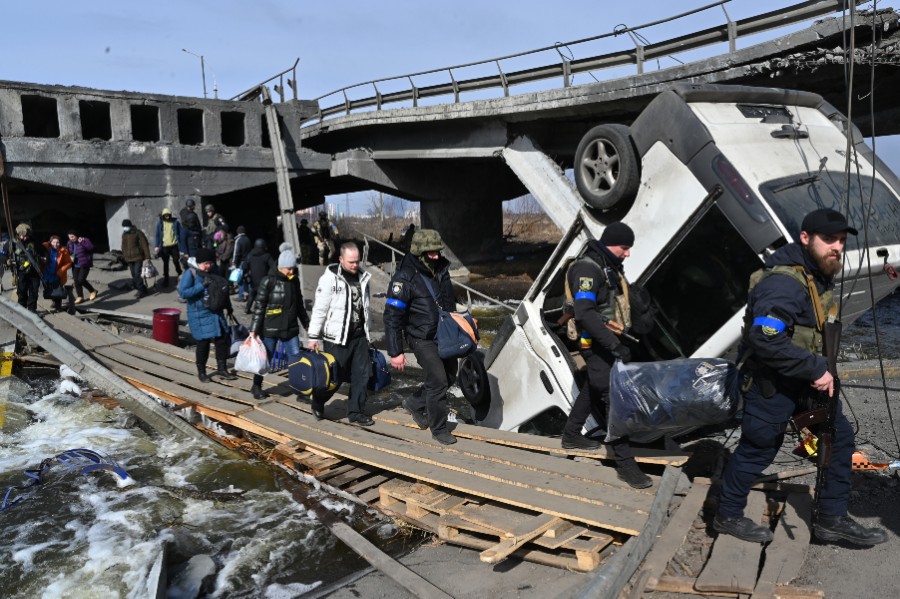 Ukraine's economy will collapse by 45.1 percent this year, as per a prediction by the World Bank. (Credit: Sergei SUPINSKY / AFP)

Washington, United States: The World Bank issued dire forecasts for Ukraine as Russia's invasion impacts both the country and its neighbors, warning in a report released Sunday of an even bleaker economic outlook if the conflict drags on.
Ukraine's economy will collapse by 45.1 percent this year, the bank predicted, far worse than the 10 percent to 35 percent downturn the IMF projected last month.
Russia will see an 11.2 percent decline in GDP, and the World Bank said the entire region is suffering economic consequences from the war, which began in late February and has caused more than four million Ukrainians to flee to Poland, Romania and Moldova.
The conflict also has caused prices of grains and energy to soar.
"The results of our analysis are very sobering. Our forecasts show that the Russian invasion in Ukraine has reversed the region's recovery from the pandemic," said Anna Bjerde, World Bank vice president for Europe and Central Asia.

"This is the second major shock to hit the regional economy in two years and comes at a very precarious time for the region, as many economies were still struggling to recover from the pandemic," she told reporters.
The Washington-based institutions expect emerging and developing countries in the Europe and Central Asia region to contract by 4.1 percent this year, a sharp reversal from the three percent growth projected before the war, and twice as bad as the pandemic-induced recession in 2020.

Ukraine faces the starkest outlook, with its economy under "severe strain" from shrunken government revenues, businesses that have closed or are only partially operational and trade in goods that is severely disrupted.
Grain exports and other economic activity have "become impossible in large swaths of the country due to heavy damage to infrastructure," Bjerde said.
The bank's forecasts assumed the war would continue for a few more months, but cautioned that they "are subject to significant uncertainty."
In a more pessimistic scenario, which reflects an escalation of the conflict, there would be a larger negative impact on the euro area, increased Western sanctions and a financial shock due to eroding confidence.
The region's economy would contract by nearly nine percent — worse than the 2008 global financial crisis — with a 20 percent decline for Russia and a 75 percent collapse for Ukraine, the report said.
Another cause for concern is a projected increase in poverty in Ukraine.
The proportion of the population living on $5.50 a day is expected to rise to 19.8 percent this year from just 1.8 percent in 2021, according to the World Bank.

Even if the region avoids the worst case scenario, Eastern Europe alone is expected to see its GDP plummet by 30.7 percent rather than grow by 1.4 percent, as projected before the invasion.
The region also has been impacted by the sanctions imposed on Russian ally Belarus for its role in the war.
The report warns that Moldova is likely to be one of the countries hardest hit by the conflict, not only because of its geographic proximity to the war, but also its inherent vulnerability as a small economy closely linked to Ukraine and Russia.
In addition, this part of Europe is dependent on natural gas to meet its energy needs.
By Delphine TOUITOU
© Agence France-Presse

Tweets by @forbesindia
Simply Speaking: Reflection, perspective and clichés—the images we live by
Binance Gets In-Principle Approval to Operate as Crypto Broker in Abu Dhabi