US to announce new sanctions on Russia over Ukraine killings

The sanctions come after an outcry over the discovery of dozens of bodies in civilian clothing in areas from which Russian troops have withdrawn around Ukraine's capital, including the town of Bucha 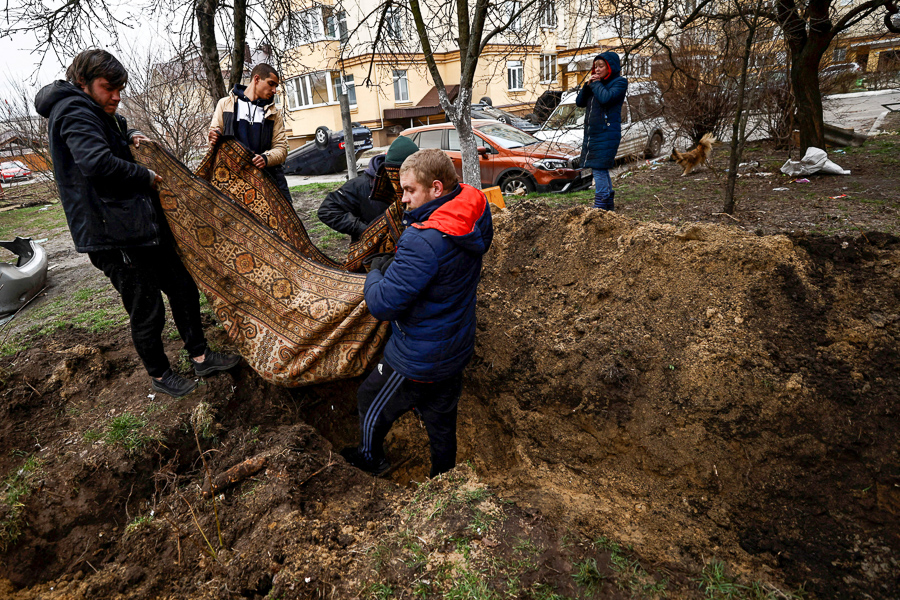 Serhii Lahovskyi, 26, and other residents carry the body of Ihor Lytvynenko to bury him at the garden of residential building​. According to residents, Ihor was killed by Russian soldiers beside a building's basement, amid Russia's invasion of Ukraine, in Bucha, Ukraine April 5, 2022. (Credit: Zohra Bensemra / Reuters)


Kyiv, Ukraine: The United States was expected to announce tough new sanctions on Russia Wednesday, including a ban on new investments, a day after Ukraine's president showed the UN Security Council harrowing images of violence and accused Moscow of widespread atrocities.
The sanctions come after an outcry over the discovery of dozens of bodies in civilian clothing in areas from which Russian troops have withdrawn around Ukraine's capital, including the town of Bucha.
Ukrainian leader Volodymyr Zelensky likened Russia's actions to Nazi atrocities in an impassioned speech by videolink to the 15-member UN Security Council on Tuesday.
"They cut off limbs, slashed their throats, women were raped and killed in front of their children," Zelensky said.

He demanded stronger action from Western powers and called for Russia's exclusion from the Council, where it holds veto power.
Later in his nightly address, a frustrated Zelensky said Russia was blocking the UN from carrying out "the functions for which it was created".
"The UN Security Council exists, and security in the world doesn't," he said.
In an interview with the BBC, the US ambassador to the UN admitted that "no one can question (Zelensky's) frustration with the Council and how the Council operates".
But she insisted that the Council was holding Russia to account, and that Moscow was isolated within it.

The killings in Bucha and elsewhere have galvanised support for Ukraine, with Washington announcing another $100 million in military aid, and produced new momentum for additional sanctions on Moscow.
"We had already concluded that Russia committed war crimes in Ukraine, and the information from Bucha appears to show further evidence of war crimes," a US source familiar with the planned measures said.
On Wednesday, Washington, in coordination with the G7 and the European Union, is expected to announce measures including a ban on all new investments in Russia.
"You can expect... that they will target Russian government officials, their family members, Russian-owned financial institutions, also state-owned enterprises," White House Press Secretary Jen Psaki told a briefing on Tuesday.
A new sanctions package being prepared by Europe, meanwhile, is set to include oil and coal, France's foreign minister said at EU talks in Luxembourg.
And Britain said it has so far frozen some $350 billion in assets from President Vladimir Putin's "war chest".
As part of the push to isolate Moscow, Spain, Italy, Denmark and Slovenia expelled dozens of Russian diplomats suspected of being intelligence operatives on Tuesday, following similar moves in France and Germany — a total of some 180 expulsions in 48 hours.
The Kremlin called it a "short-sighted move" that would complicate efforts to negotiate an end to the hostilities.
Putin also warned of "reprisals" for recent European measures targeting Russian gas giant Gazprom — and said Moscow would "monitor" its food exports to "hostile" nations, raising the spectre of shortages and price spikes.

The Kremlin has denied any civilian killings, claiming the images emerging from Bucha and other sites are fakes produced by Ukrainian forces, or that the deaths occurred after Russian soldiers pulled out.
At the Security Council meeting, Moscow's ambassador rejected Zelensky's claims, saying the "ungrounded accusations... are not confirmed by any eyewitnesses".
But satellite photos taken while Bucha was still under Moscow's control show what appear to be bodies lying in streets where the dead were later found by Ukrainian forces and seen by journalists.
And multiple Bucha residents told AFP they had seen Russian soldiers killing civilians.
"Right in front of my eyes, they fired on a man who was going to get food at the supermarket," said 43-year-old Olena, who declined to give her family name.
During a grim cleanup, the remains of partially burned bodies in black bags were lifted into a van, with officials telling journalists "dozens of bodies" remained in apartments and in nearby woods.
Western nations have given short shrift to Russia's denials.
"What we've seen in Bucha is not the random act of a rogue unit. It's a deliberate campaign to kill, to torture, to rape, to commit atrocities," US Secretary of State Antony Blinken said.
European Commission chief Ursula von der Leyen, who will visit Kyiv this week, has offered the bloc's assistance in documenting proof of war crimes.

Ukrainian authorities have warned that others areas may have suffered even worse fates than Bucha.
Scenes of devastation have met those venturing into areas from which Russian forces have withdrawn.
In the northern city of Chernigiv, which was besieged from the early days of the invasion, a charred children's hospital, full of bullet and shrapnel holes, served as a shelter.
In the dank basement, children painted on walls — tiny handprints, a smeared rainbow, a fluttering Ukrainian flag.
"Cluster bombs were flying, we have traces of these bombs," said 51-year-old Olena Makoviy. "The injured were brought to the children's hospital, both adults and children."
City officials estimate around 350 civilians have been killed in Chernigiv, with fellow residents digging mass graves to bury them.
"It was very scary here from the first days of the war," said Makoviy. "They brought guys, handsome, young, but no longer alive,"

The Russian withdrawal from areas around Kyiv and the north is part of a shift of focus towards Ukraine's southeast, in a bid to create a land bridge between occupied Crimea and Moscow-backed separatist statelets in Donbas.
NATO chief Jens Stoltenberg said the alliance expects a Russian push in "coming weeks" to try to seize the entire Donbas.
In the village of Krasnopillia there, Ukrainian forces were preparing to counter that push.
"We know the Russians are reinforcing and are getting ready to attack," a senior Ukrainian officer on the ground told AFP. "We are ready... we've planned some surprises for them along the way."
Civilians have been asked to evacuate west and on Tuesday a line of cars stretching three kilometres was waiting to pass a checkpoint, while thousands of other residents boarded trains to leave.
And violence has continued elsewhere, with Ukraine's prosecutor general saying Tuesday that bombing around Kyiv had killed 12 people.
Peace talks between the sides have so far gone nowhere, though Moscow says it is "ready" to continue.
Ukraine has proposed an agreement where other countries would guarantee its security in return for Kyiv accepting a neutral and non-nuclear status, not joining NATO and refusing to host foreign military bases.
The proposal would also see Russia accept Kyiv's admission to the European Union.
By Joe STENSON with Philippe RATER at the United Nations
© Agence France-Presse