Once implemented, the law will give Brussels unprecedented authority to keep an eye on decisions by the giants—Google, Meta, Amazon and Apple—especially when they pull out the chequebook to buy up promising startups 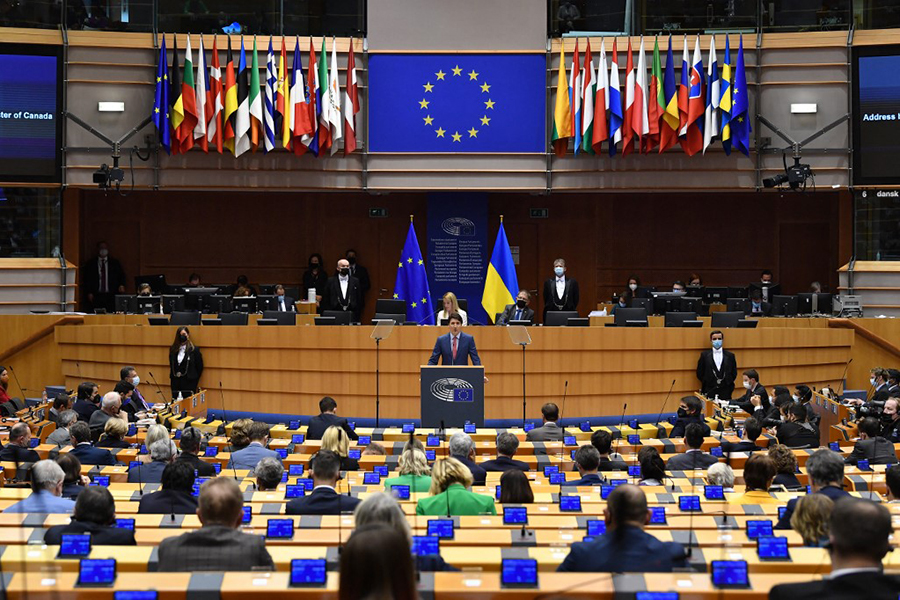 The law contains about 20 rules that in many cases target practices by Big Tech that have gone against the bloc's rules on competition, but which Brussels has struggled to enforce. Image: John THYS / AFP

Bruxelles, Belgium: Negotiators from the European Parliament and EU member states agreed Thursday on a landmark law to curb the market dominance of US big tech giants such as Google, Meta, Amazon and Apple.Meeting in Brussels the lawmakers nailed down a long list of dos and don'ts that will single out the world's most iconic web giants as internet "gatekeepers" subject to special rules.

The "Digital Markets Act" (DMA) has sped through the bloc's legislative procedures and is designed to protect consumers and give rivals a better chance to survive against the world's powerful tech juggernauts.

"The agreement ushers in a new era of tech regulation worldwide," said German MEP Andreas Schwab, who led the negotiations for the European Parliament.

"The Digital Markets Act puts an end to the ever-increasing dominance of Big Tech companies," he added.

The main point of the law is to avert the years of procedures and court battles needed to punish Big Tech's monopolistic behaviour where cases can end with huge fines but little change in how the giants do business.

Once implemented, the law will give Brussels unprecedented authority to keep an eye on decisions by the giants, especially when they pull out the chequebook to buy up promising startups.

The law contains about 20 rules that in many cases target practices by Big Tech that have gone against the bloc's rules on competition, but which Brussels has struggled to enforce.

The DMA imposes myriad obligations on Big Tech, including forcing Apple to open up its App Store to alternative payment systems, a demand that the iPhone maker has opposed fiercely, most notably in its feud with Epic games, the maker of Fortnite.

Google will be asked to clearly offer users of Android-run smartphones alternatives to its search engine, the Google Maps app or its Chrome browser.

A Google spokesperson told AFP that the US internet giant will "take time to study the final text and work with regulators to implement it."

"While we support many of the DMA's ambitions around consumer choice and interoperability, we remain concerned that some of the rules could reduce innovation and the choice available to Europeans," the spokesperson said.

Apple would also be forced to loosen its grip on the iPhone, with users allowed to uninstall its Safari web browser and other company-imposed apps that users cannot currently delete.

In a statement, Apple swiftly expressed regret over the law, saying it was "concerned that some provisions of the DMA will create unnecessary privacy and security vulnerabilities for our users".

After a furious campaign by influential MEPs, the law also forces messaging services such as Meta-owned WhatsApp to make themselves available to users on other services such as Signal or Apple's iMessage, and vice-versa.

France, which holds the EU presidency and negotiated on behalf of the bloc's 27 member states, said the law would deliver "concrete impacts on the lives of European citizens".

Violation of the rules could lead to fines as high as 10 percent of a company's annual global sales and even 20 percent for repeat offenders.

The DMA "will have a profound impact on the way some gatekeepers' operations are currently conducted," said lawyer Katrin Schallenberg, a partner at Clifford Chance.

"Clearly, companies affected... are already working on ways to comply with or even challenge the regulation," she added.

The Big Tech companies have lobbied hard against the new rules and the firms have been defended in Washington, where it is alleged that the new law unfairly targets US companies.

With the deal now reached by negotiators, the DMA now faces final votes in a full session of the European Parliament as well as by ministers from the EU's 27 member states.

The rules could come into place starting on January 1, 2023, though tech companies are asking for more time to implement the law.
by Alex Pigman

Tweets by @forbesindia
Spotlight on Spotify: Scandal, governance and the potential for prevention
Bank of England calls for tighter regulation of cryptocurrencies