Spotlight on Spotify: Scandal, governance and the potential for prevention 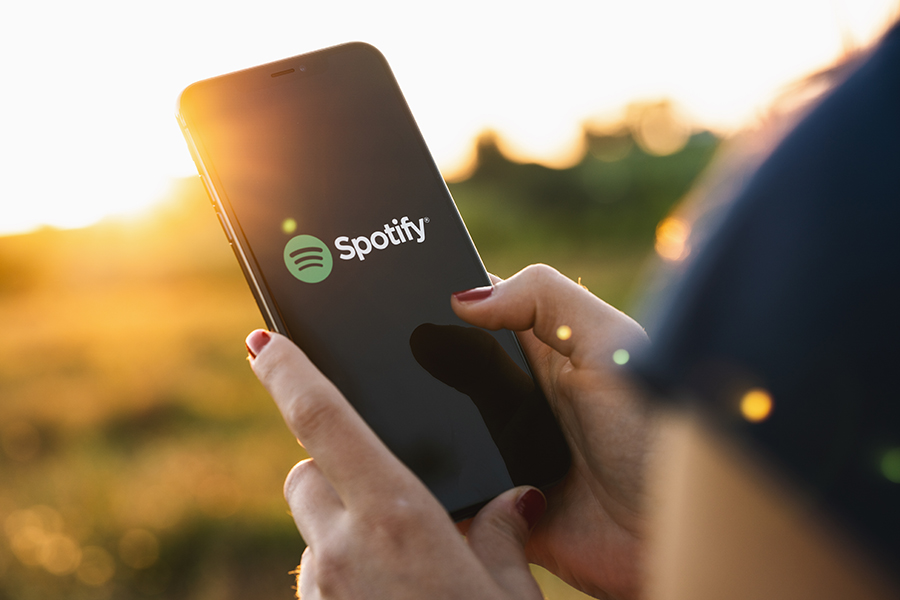 Amidst subscriber cancelations and artist dissatisfaction, Spotify’s shares have declined in value to about half of what they were a year ago, though the stock was already trending downward before the current controversy Image: Shutterstock

Industry-leading music and podcast streaming service Spotify has come under fire amid allegations that its highest-paid podcaster, Joe Rogan, has routinely used his show to spread COVID-19 misinformation and has repeatedly used racial slurs on-air. High-profile musical artists like Neil Young and Joni Mitchell have removed their music from Spotify, and podcaster Brene Brown paused her popular podcasts as a way to pressure the platform to institute better warnings about misinformation.

Amidst subscriber cancelations and artist dissatisfaction, Spotify’s shares have declined in value to about half of what they were a year ago, though the stock was already trending downward before the current controversy. Rogan has issued an apology for the past use of incendiary racial language, and Spotify has removed more than 100 of Rogan’s podcast episodes from its service. The company has also committed to invest $100 million in content from underrepresented podcasters and artists.

Darden Professors Jared Harris and Yo-Jud Cheng, experts in corporate governance, offer insights on what businesses can learn from Spotify’s meltdown — and whether this presents an opportunity for Spotify’s competitors.

Q: Spotify is currently in crisis mode, reacting to an exodus of artists from the platform, a decline in subscribers and a $4 billion decline in the market value of their company. Those are all problems. But they also might be seen as symptoms of some deeper issue. What exactly is the problem at Spotify?

A Constellation of Problems
Harris: Spotify is now dealing with a crisis of confidence with its stakeholders that has to be managed, to be sure, but the emergence of these explosive issues indicates a governance failure behind the scenes. The company seems caught by surprise by Neil Young’s refusal to share a platform with Rogan, by India.Arie’s supercut of Rogan using racial slurs and by the loss of subscribers.

And now, perhaps emboldened by these controversies, artists seem to have amplified another latent problem: the underlying revenue-sharing business model itself. Rogan was making $100 million dollars for his podcast, while most musical artists make very little when their music streams on Spotify. So now you have a constellation of related and unrelated problems that have put the company on its heels.

Spotify has essentially been watching these problems cascade out, reacting as best it can, but all these issues might have been better anticipated with more robust governance approaches to risk management enacted long before their emergence.

A series of decisions
Cheng: What we are witnessing at Spotify right now is the result of a series of strategic decisions that management and the board have made in the past. While it is too late at this point for “good governance” to make this problem go away, good governance would have provided a framework and a checkpoint through which the long-term implications of major strategic actions could be carefully considered and debated.

For example: “Are we solely a platform for music streaming?” “Should we expand into podcasts? does this entail getting into the business of content creation in addition to content hosting?” “How do we select podcasters? Should we work with controversial podcasters? If so, with whom, and on what terms?” “How will we pay podcasters? Should this differ from the way we pay music artists?”

Either Spotify’s board did not have these discussions in advance of this crisis or those conversations didn’t provide adequate answers. A lot of the time when a company fails to anticipate a crisis, it is because it didn’t have a process for asking questions and surfacing good answers around the strategic decisions that led it to the situation it finds itself in.
Preventive Care vs. Crisis Management

Q: So if governance isn’t the solution to the current problem because it is essentially too late, what should have happened at Spotify previously?

What is really necessary is that boards be able to evaluate not just the company’s performance, but to evaluate themselves: Are they the right people to answer these questions? And are they the people who will raise the right questions?

The right processes in place
Harris: It’s difficult for board members and executives to ask the right questions and avoid complacency. Governance is easy when there is nothing urgently pushing you to engage in some introspection. It is much harder when reality is forcing your hand. Much better to put processes in place to make you ask those tough questions about your business.

Companies with impressive board rosters, like Theranos or Facebook, include boards with titans of industry and leaders of government — but such boards still won’t ask the right questions if the processes aren’t in place to make them confront their weaknesses.

Governance and Purpose
Q: So while Spotify is wrestling with some significant challenges — and hopefully keeping track of these lessons about governance for the future — what lessons can other companies learn?

A careful look at board cultures
Cheng: Competitors should absolutely be learning from Spotify! For instance, what is the smart thing, governance-wise, for Apple Music to do right now? It isn’t too late for good governance for them or other competitors. A common barrier standing in the way of good governance is the fact that boards are expected to simultaneously do two conflicting things: They have to monitor management to prevent self-dealing and manage risks, and also advise and partner with management to guide strategic direction and drive performance.

Mediating these disparate governance responsibilities is the board’s culture: Who moderates discussions? Who gets to ask questions? Whose voices are heard?

A healthy board culture facilitates healthy skepticism and encourages candid question-asking. You don’t want a culture in which executives are compelled to hide things from their boards out of fear of reprisal. But you also don’t want a board that simply rubber-stamps management’s decisions. You want directors who are able to collaborate with management and also ask the tough questions.

Harris: This is why it can be difficult to offer blanket prescriptions for what other companies should learn from Spotify’s problems, because it goes back to each company’s particular engine for value creation — its purpose. Good governance is always at the service of that value-creation engine.

If what you’ll benefit from is an outside perspective, you should concentrate on board composition. If your values are best protected by giving people safety for raising uncomfortable truths about the company, then you might concentrate more on culture and process. If what you need is more information on what your potential risks are, you have to make sure people can talk about them and that the company values the raising of challenging issues.

Cheng: Spotify’s struggles create an opportunity for competitors like Apple to think about their values and competitive positioning and to potentially seize market share. What role should music streaming and podcasts play in Apple’s corporate strategy moving forward? By virtue of their corporate strategy, Apple has the opportunity to generate complementarities across business lines and also greater optionality in competitive moves as compared to a business that operates in only one segment.

Harris: A competing platform — particularly one like Apple Music — could seize this opportunity as a wake-up call that draws attention to the underlying governance issues. You could double or triple what you pay artists, for example, making the protecting of your artists’ interests a value that you will really protect.

Purpose and values are not only what the company thinks of itself. These are, to some degree, things that spring into existence in the eyes of their customers and other stakeholders as well. Governance is the way that firms organize around, and execute on, their purpose. And that will be different for every company.

Q: If good governance involves asking the tough questions that enable you to protect that value-creation engine, how do they prevent a person who raises difficult questions from being perceived as a nuisance or complainer?

The things that need changing
Cheng: It’s again a question of culture: How you keep their viewpoints valuable within the company, making sure that their viewpoints are valued and create lasting importance. Ideally, it isn’t just one person who is the designated contrarian and whose job it is to ask all the uncomfortable questions. Ideally, everyone is looking for those questions and is happy when they are asked.

As Harvard Business School’s Frances Frei points out, if the whole outcome of a meeting is only a congratulatory celebration in which prevailing views are reinforced, then that meeting was a waste of time. In essence, why did you get everyone together if you were not going to change anything afterward? The same applies for board meetings. Time is valuable, so don’t waste time patting each other on the back and confirming all your own impressions. Use that time instead to consider the things that need changing. If boards tell themselves, “We are here to convince each other, we are here to challenge each other,” it is really a sign of a culture that favors finding out what the risks to the business are and dealing with them honestly and preemptively.

The red flag
Harris: The challenge, though, is that this goes against our natures. Our primitive brains are wired to avoid friction, to avoid confrontation, to avoid conflict. This makes us prefer saying things that our colleagues will agree with and that will make them think we are brilliant. But your primitive brain is lying to you: If you don’t say the hard things, the organization will end up fighting for its survival with a cascading series of crises that you didn’t predict and that you haven’t prepared for.

Cheng: That’s why it has to be the responsibility of everyone in the room to ask hard questions. It can’t be left to the designated contrarians. Governance is not even just the responsibility of boards. Everyone on a company’s management team needs to feel that they can influence decision-making and that they can and should raise concerns about risks that might hinder the future of the business. If everyone always thinks that everything is going great with the company, that is probably  an indication of the opposite.

That’s a red flag that needs to be addressed.