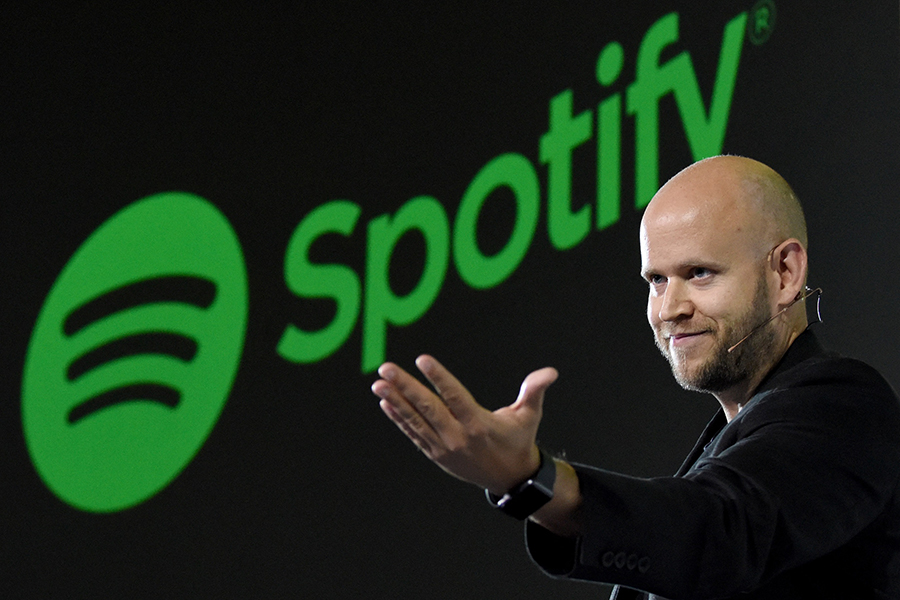 "We are working to add a content advisory to any podcast episode that includes a discussion about Covid-19," Spotify CEO Daniel Ek said in a statement.
Image: Toru Yamanaka  / AFP

Music streaming giant Spotify announced Sunday it would start guiding listeners of podcasts discussing Covid-19 to facts about the pandemic, after artists including Neil Young pulled their songs from the platform in anger at misinformation.

The artists, also including Joni Mitchell, last week demanded that Spotify remove their music or drop podcaster Joe Rogan after a call from medical professionals to prevent Rogan from promoting "several falsehoods about Covid-19 vaccines".

The Duke and Duchess of Sussex have also flagged concerns over misinformation on Spotify, but reiterated their commitment to continue using it to publish their content.

"We are working to add a content advisory to any podcast episode that includes a discussion about Covid-19," Spotify CEO Daniel Ek said in a statement.

"This advisory will direct listeners to our dedicated Covid-19 Hub, a resource that provides easy access to data-driven facts, up-to-date information as shared by scientists, physicians, academics and public health authorities around the world, as well as links to trusted sources."

In addition, Ek said the company would publish its "Platform Rules", which include guidelines for creators on what Spotify labels "dangerous" and "deceptive" content.

The "new effort to combat misinformation" would roll out in the next few days, he added.

Rogan, 54, has discouraged vaccination in young people and promoted the off-label use of the anti-parasitic drug ivermectin to treat the virus.

The podcaster, who has a $100 million (90 million euros) multi-year exclusive deal with Spotify, was kept on, and the company complied with Young's demand and started removing his catalogue of songs.

The Duke and Duchess of Sussex, meanwhile, said they were "committed to continuing" their lucrative content deal despite "concerns" over misinformation.

"We have continued to express our concerns to Spotify to ensure changes to its platform are made to help address this public health crisis," a spokesperson for Archewell, the Duke and Duchess' organisation, said in a statement.

"We look to Spotify to meet this moment and are committed to continuing our work together as it does."

In a video posted on his Instagram account, Rogan expressed disappointment that Young and Mitchell had pulled their music from Spotify, and sought to explain why his podcast had come under fire.

He cited two episodes in particular, during which he interviewed a cardiologist, and a virologist who had worked on mRNA technology, the same method used to make several Covid-19 vaccines.

"They have an opinion that's different from the mainstream narrative. I wanted to hear what their opinion is," Rogan said.

He also praised Spotify's decision to add a content advisory to coronavirus-related episodes of any podcast.

Spotify voiced "regret" over Young's move but cited a need to balance "both safety for listeners and freedom for creators".

Spotify's move drew applause online from organisations including video-streaming platform Rumble, which credited the Swedish company with "defending creators" and standing "up for free speech".

But Young, 76, also garnered wide praise for taking a stand, including from the World Health Organization chief.

The musician also urged fellow artists to follow his lead, and calls for boycotts and cancelled subscriptions flourished on social media.

In recent years, online media titans including Facebook and YouTube have come under fire for allowing conspiracy theorists to spread their views.

But despite its explosive growth, podcasting has largely flown under the radar.

Tweets by @forbesindia
The New York Times buys Wordle
Do you have ideas about feeding astronauts on Mars? NASA wants to know