China reports 20,000 daily Covid-19 cases, most since start of pandemic 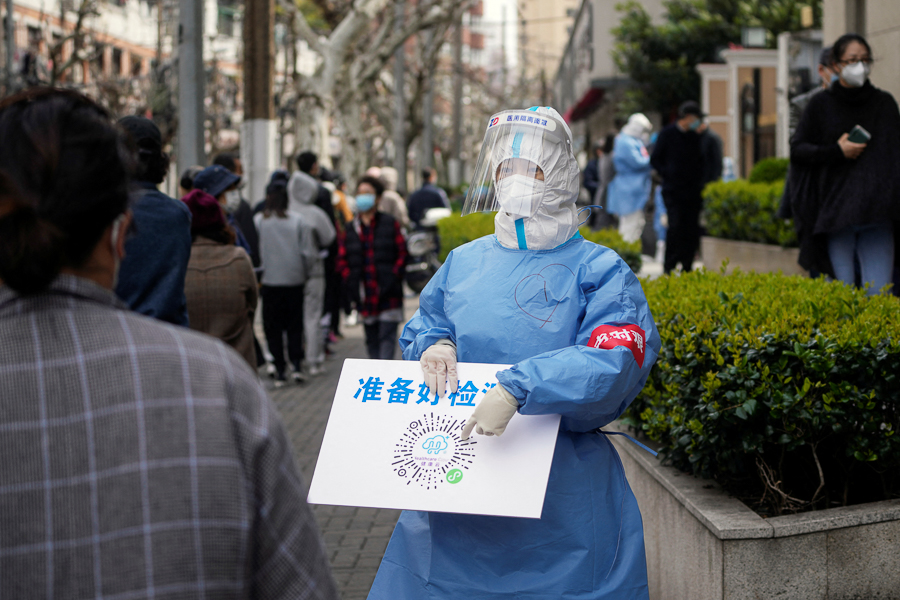 A worker in a protective suit shows a QR code to residents lining up for nucleic acid testing, as the second stage of a two-stage lockdown to curb the spread of the coronavirus disease (COVID-19) begins in Shanghai, China April 1, 2022.  (Credit: Aly Song / Reuters)


Shanghai, China: China reported over 20,000 Covid-19 cases on Wednesday, the highest daily tally given since the start of the pandemic, with Shanghai the heart of the virus surge despite being in lockdown.
The country's "zero-Covid" strategy has come under immense strain as cases spike.
Until March, China had kept daily cases low with snap localised lockdowns, mass testing, and strict restrictions on international travel.
But the caseload has hit thousands per day in recent weeks, with officials saying they have detected a mutation of the highly transmissible Omicron variant near Shanghai.
China recorded 20,472 infections on Wednesday, the National Health Commission said in a statement, adding that there were "no new deaths."

It is the country's highest-ever daily infection number given by authorities, even during the peak of the initial outbreak which centered around Wuhan.
The majority of the cases are, however, asymptomatic.
Yet in Shanghai quarantine facilities are bulging with people who test positive as city officials stick rigidly to virus protocols.
Those include separating Covid-positive babies and children from parents who test negative, a policy that has stirred anxiety and anguish from worried families.
Shanghai, China's largest city, accounted for more than 80 percent of the national tally, city officials said on Wednesday.
The metropolis of 25 million locked down its residents in phases last week, prompting scenes of panic-buying and mass testing.
A top Shanghai official has conceded that the financial hub had been "insufficiently prepared" for the outbreak.
Anger over lack of fresh food and curtailed movements is rising among residents as the lockdowns drag on, with state broadcaster CCTV reporting that the city will launch a fresh round of tests on the entire population on Wednesday.
China, the country where the coronavirus was first detected in the central city of Wuhan in late 2019, is among the last remaining places following a zero-Covid approach to the pandemic.
The outbreak has taken on an increasingly serious economic dimension, trimming analysts' growth projections as factories close and millions of consumers are ordered indoors.
© Agence France-Presse