May Day: The Day the Stocks Rose

India’s Black Swan Last summer, the Indian stock markets saw, what Nassim Nicholas Taleb would call a Black Swan Event. According to Taleb, to be a Black Swan, an event should be rare, have an extreme impact and should be later rationalised by hindsight. The May 18, 2009 occurrence fulfils all three conditions.

On that day, the market moved up 17.74 percent, one of the highest single-day gains in the history of the Indian stock markets.
It was the kind of day most fund managers would fantasise about when they dreamt of their fortunes turning. Fortunes did turn, except that, for many, it was for the worse. To put it simply, fund managers were just not ready!

Why they missed the party 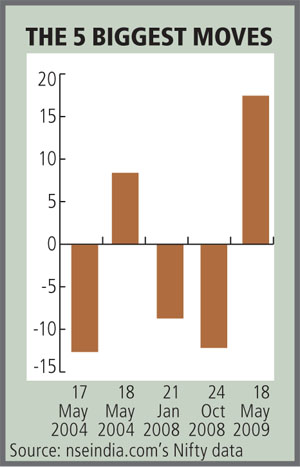 In May last year, most fund managers were sitting out of the market for a variety of reasons. The huge jump meant that now when they entered the market, it was so high that even a year later, they have found it hard to beat major indices. While the markets showed one of the biggest single-day gains ever, the CRISIL Fund~eX, an index for diversified mutual funds, moved up by only 13 percent. But it would be wrong to blame the fund managers. They only did what was prudent. Remember, the world was still reeling from the global recession; Indian markets had crashed by 12 percent. To top this, India was going to the polls. There was a general belief that it would be a fractured mandate. And then the the UPA government returned to power unhindered by the Communist Party of India. Investors across the world thought that it was the best thing that could have happened to India. This unexpected event led the market to climb up 17.74 percent. That’s the the kind of return funds sometimes earn on an annualise basis.


The Story, one year later 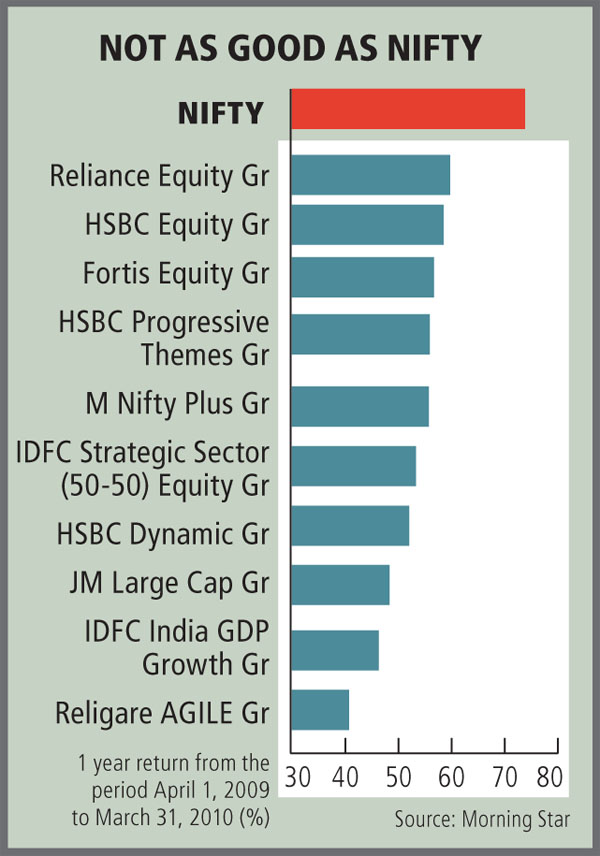 Most fund managers did well if you look at it on an annual basis. The Crisil Fund~eX for the year moved up by 92 percent while the Nifty moved up by 74.8 percent. Nevertheless, many funds are still affected. Some fund managers did have bad portfolios, while some were sitting on cash. Take HSBC mutual fund, which manages Rs. 6,000 crore in India. It had taken a conservative stance last year.
Vikramaaditya, CEO, HSBC Asset Management (India), says, “A jump of over 17 percent in the market in a single day was an unprecedented event and was unexpected. However, it is more important to look at consistent performance over the long term. Eventually, the impact of the one-day event on the funds will taper off over the long term, and we may see a truer picture of the consistent performers.”
Kenneth Andrade, chief investment officer of IDFC mutual fund, has two funds that did not perform well. He does not attribute much to this event. He says that the two funds — IDFC Strategic Sector and India GDP growth fund, which returned 53 percent and 46 percent, respectively, over the last one year — underperformed for other reasons. The GDP growth fund was a new product and was on the verge of investment, while the strategic sector fund was in oil and gas, a sector that did not do well.

Tweets by @forbesindia
The Hindu: Board Room Becomes Battlefield
The New Shanghai Knights