The Audacity of Hope

Nasscom has perfected the art and unscience of target-giving

Just when you thought that the days of expansion for Indian software companies were over, industry body Nasscom (National Association of Software and Service Companies) has news for you. Along with management consulting firm McKinsey, Nasscom has just released Vision 2020, its 2009 report which predicts that industry revenues will rise from $59.6 billion currently to $225 billion by 2020.

The latest report is the fourth in the Nasscom-McKinsey series, starting from 1999. The first report predicted revenues for Indian IT (information technology) had the potential to grow from $3.9 billion in 1999 to $87 billion in 2008. That meant multiplying revenues 22 times in nine years. 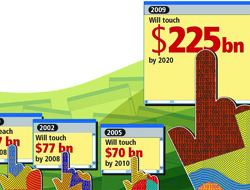 But as legendary baseball player and serial malapropist Yogi Berra said, “It’s tough to make predictions, especially about the future.” In 2002, the second edition of the report shaved off $10 billion from the original target. The revised goal for 2008 was $77 billion.

The third edition in 2005 not only lowered the target again, it added a few more years for the goal to be reached. The revised goal was $70 billion by 2010. Nasscom and McKinsey were unable to accurately predict the number for domestic IT revenues, originally estimated at $37 billion by 2008, revised downward to $10 billion by 2010.
To be fair, by 2008, the Indian IT industry did touch $52 billion in revenue, fairly short of the original estimate, but at a 33.4 percent compounded growth rate (CAGR) over nine years, it was still a heck of a performance.
Vision 2020 argues that Indian IT can touch $225 billion by 2020. That means a CAGR of close to 13 percent over the next 11 years. Do-able, says Nasscom.
May be not, says Goldman Sachs. The global investment bank says its long-term growth prospects for Indian IT are muted. Goldman predicts a mere 3 percent CAGR for large Indian IT players till 2012. The reasons: Indian IT is now a mature and cyclical industry with a significant pricing pressure due to limited differentiation between offshore vendors and major competition from multi-nationals like Accenture, IBM and HP (who weren’t as big or focused on offshore IT 10 years ago).
Nasscom spokesperson Sangeeta Gupta says she stands behind the $225 billion target. “Besides,” she adds, “$225 billion isn’t really a target but only an aspiration for the industry.”
But aspirations have a way of running amok. In 2005 at the launch of the third report, Nasscom’s vice chairman predicted that Indian IT could add an additional $15-20 billion over the $60 billion target for 2010. His name?
Ramalinga Raju.
(This article has been corrected. The Compounded Annual Growth Rate (CAGR) of the Indian IT industry by 2008 is 33.4 percent and not 54 per percent as reported earlier)

Tweets by @forbesindia
Who on Earth is the Common Man?
Indians Can't Work, Chinese Can't Think