Offshore centres of multinationals were considered unviable some years ago. But today they have not just outlived the prediction, but are also thriving

THE STRUGGLE
In April 2007, global technology research firm Forrester Research published a report that scared the bejeezus out of most multinational “captive centres” — company-owned offshore centres that provided services like software development, back office support and R&D to their parents. Titled “Shattering the Offshore Captive Centre Myth”, the report said that 60 percent of the 375 captives in India were struggling with a host of issues including cost escalations, skyrocketing employee attrition, lack of adequate processes and sporadic headquarters support. Most were therefore failing to meet their setup expectations and would have to pick one of four exit options: Shut down operations; sell out to third party outsourcing vendors like Infosys or Wipro; hollow out their operations and then “termite” it by filling it with vendor employees; or work in partnership with vendors.

“Why are captives imploding?” asked the authors. 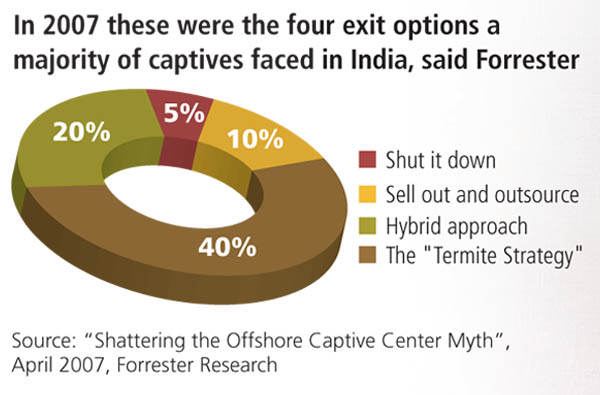 DODGING THE BULLET
Three years later, there is a surprise in store. NASSCOM tells us that the number of captive centres in India has shot up to over 900, collectively employing over 390,000 and chalking up export revenues of $10.6 billion for the financial year 2009. “Captives are here to stay,” says NASSCOM vice-president Sangeeta Singh. Would a better question today then be, “Why didn’t captives implode?”
“The issues Forrester raised were spot on, the predictions may be not,” says Karthik Ananth, a director with offshore advisory company Zinnov. In his opinion the single biggest reason captives survived was the global economic meltdown that began in the second half of 2007. As jobs dried away, attrition became a non-issue. A crash in real estate prices made commercial rentals more affordable. And steep cuts in global R&D budgets meant MNCs had no option but to make their India captives produce results. The local captive leaderships, in turn, pulled up their own socks to become more proactive about their work. That, he says, gave many captives the breath of life and the time to evolve their strategy. 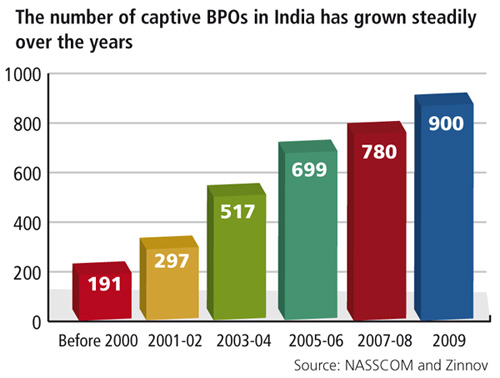 MNCs that faced stagnation in their home markets also found hope in India’s growing economy; and these turned many captives into either base camps for exploring the Indian market or laboratories for creating new products.
But Sudin Apte, a principal analyst with Forrester Research and the author of its bombshell report, says he stands by most of his report. Apte says there are just 450-500 captive centres left in India today, down from 600 a few years back.
PARTNERING TO SURVIVE AND THRIVE
Everyone — Forrester, Everest and Zinnov — agrees that more captives are increasingly partnering with local service providers. This helps captives either farm out low-end work that many of their employees would get bored with or rapidly add resources for temporary spurts in demand. For instance, Texas Instruments India, set up in 1985 and arguably India’s oldest MNC captive, started handing out some of its R&D work to local partners in 2000. “From an ‘either-or’ choice between captives and third party providers, the market has now matured to an ‘and’,” says Amneet Singh, a VP with Everest.