Analysis: BJP Manifesto is a repeat of 2014's promises

BJP's 45-page manifesto reads like a report card and union budget statement; numbers have a persuasive quality but devil lies in the details 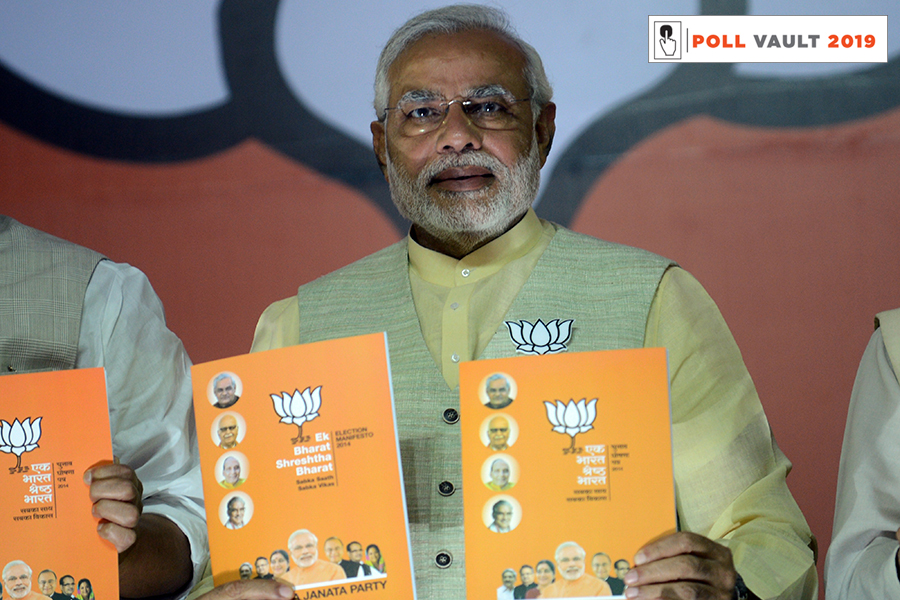 The Bharatiya Janta Party (BJP) released its manifesto for Elections 2019 at an event in New Delhi. From doubling farmer income to housing for all by 2022, a quick glance at the BJP mission statement shows a repeat of many promises it had made in the 2014 manifesto. More than a mission statement, the manifesto reads like a status report on what the government has done in the past five years, some mud-slinging on the Opposition and its past governance track record, and a Union Budget-like statement with plans and earmarked investments and targets. BJP’s manifesto comes nearly a week after the Indian National Congress released its manifesto for the general elections, and only days before the country kicks off its poll process on April 11.

The party dedicated the poll promises statement to the people of the nation during the launch event. Like the Congress manifesto, BJP said it too consulted lakhs of people on social media to create its 2019 “vision document” and “has been written for the people and aims to consider every section of the society”, the minister of Home Affairs, Rajnath Singh, said at the launch. In a letter to all Indians, PM Modi appealed for a second term, saying: “The BJP comes to you to seek your valued blessings yet again, so that India continues unhindered on the path of development, to realise its true Destiny with renewed vigour." “We've achieved a lot in the last five years and we want to do a lot more,” he adds in the letter. From ‘Sabka Saath, Sabka Vikas’ in 2014 to ‘Sankalpit Bharat, Sashakt Bharat’ in 2019, here’s a look at what the manifesto promises: India First & Zero Tolerance
Building on the nationalistic fervour that follows surgical strikes and the Balakot airstrikes more recently, the manifesto promises an attitude of zero tolerance to terrorism and gives a free-hand to the security forces to combat terrorism. This also includes building the latest defence equipment in India, modernising police forces and strengthening armed forces by modernising them. It boasts of implementing the long-standing One Rank, One Pension (OROP) for veterans of the armed forces. Citizen Amendment Bill
It also promises to pass the Citizenship Amendment Bill to protect religious minorities in neighbouring nations from persecution. It promises to protect the linguistic, social and cultural identity of the people of the North Eastern states and vows to give Indian citizenship to the Hindus, Jains, Buddhists and Sikhs who are fleeing persecution in other countries. Jammu & Kashmir Article 370 and Article 35A
The BJP reiterated that it will abolish Article 370, which confers special status to Jammu & Kashmir, and will also abolish Article 35A, which prevents non-residents to buy land in the northern state, to ensure its development. Ram Mandir
An important tide that the BJP is riding on to get majority votes has been the controversial construction of the Ram Mandir in Ayodhya. In the manifesto, the party says, “we will explore all possibilities within the framework of the Constitution and all necessary efforts to facilitate the expeditious construction of the Ram temple in Ayodhya.” Doubling farmer income by 2022
In a repeat of its 2014 promise, the manifesto says it will aim to double farmer’s income by 2022. It says, if voted back to power, the benefits of the Pradhan Mantri Kisan Samman Nidhi Yojana (PMKSNY), which ensures financial support to farmers with land up to two hectres, will be expanded to include all farmers irrespective of their land size. The manifesto also focuses on interest-free agricultural loans for farmers up to Rs 1 lakh, empowering them with new policies, improving warehouse networks in the country, reducing agricultural imports and improving seed quality. India at 100
PM Modi urged the public to envision an India in 2047 and promises in his letter to make the next five years a foundation laying period to achieve the vision. The manifesto promises to make India the third-largest economy in the world from seventh currently, by growing the economy to $5 trillion by 2025 and $10 trillion by 2032. It seeks to do so by reducing tax rates, simplifying the four-tier goods and services tax (GST) regime, promoting yoga globally, investing Rs 100 lakh crore in infrastructure, building technology centres focusing on its 2014 mantras, Make In India and Startup India. Healthcare for all
BJP has been working on universal healthcare for all, which, at best, has been under scrutiny – whether a scheme that promises a health cover of Rs 5 lakh to 10.74 crore Indians is feasible at all. The manifesto promises to set up 1.5 lakh health and wellness centres by 2022 and set up telemedicine and diagnostic laboratories at the HWCs by 2022. The party also promises to work on doubling the number of MBBS and specialist doctors in the country by 2024. It also aims to achieve full immunisation cover for all children and pregnant women by 2022, and eliminating tuberculosis by 2025. Good governance
Focusing on election issues, the manifesto talks about bringing about judicial reforms, good governance, transparency, a corruption-free nation, ease of living, protecting the Himalayas, union territories and developing the north-eastern states. Jobs
While there is no straightforward statement on jobs, which has been a key election issue, the manifesto says it will focus on the 22 key sectors to create new opportunities and build on the entrepreneurial spirit in the country.

Science and Technology
The manifesto speaks of setting up a new Science Mission to focus on artificial intelligence and robotics, increasing research and development through a National Research Foundation and translating Science & Technology and Humanities textbooks from English to any Indian language. Sports
NDA 2.0 will build on the ‘Khelo India’ initiative, encourage women and tribals in sports, introduce practical sports courses in the curriculum, and set up a National Sports Education Board. It also promises to build mini-stadiums in each sub-district along with state governments. Women Empowerment
While women’s safety remains an important societal concern and election issue, the manifesto claims: "We have gone beyond tokenism to take substantive measures to ensure overall development of women and achieve gender equality.” Another reiteration of its 2014 promise, the party promises to build on its ‘Beti Bachao, Beti Padhao’ campaign by promising financial support for education and subsidised loans for the higher education of girls. The party says it will also ensure better credit availability for women, market and distribution network for women entrepreneurs and women farmers. A ‘Women in Workforce’ roadmap will be instituted to increase the percentage of women in the workforce in India. To encourage companies to hire more women, it says, the government will source 10 percent of material for government procurement from companies with 50 percent women employees, including but not limited to products from leather, apparel, paper, wood, idols, plastic items, clocks, toys, etc.
Women’s safety
While Triple Talaq has already been made illegal, the manifesto promises to abolish Triple Talaq and Nikah Halala. It also says that a Women’s Security Division will be set up under the home ministry, which will ensure time-bound investigation and trial of rape, forensic facilities and fast-track courts for cases dealing with crime against women. In conclusion
While the manifesto is detailed, it repeats a lot of its promises from 2014, which underlines what the government has been saying in the run up to the elections – five years are not enough to follow through on all the promises. The mission statement does not address important issues like the rise in hate crimes, crimes against women, slowing growth and lack of jobs in the country. And with a promise to set up a new scheme and department to address every other issue highlighted in the manifesto, it is toeing the line it has earlier criticized the previous governments for. Numbers and detailed plans have a persuasive quality but the devil is in the details.