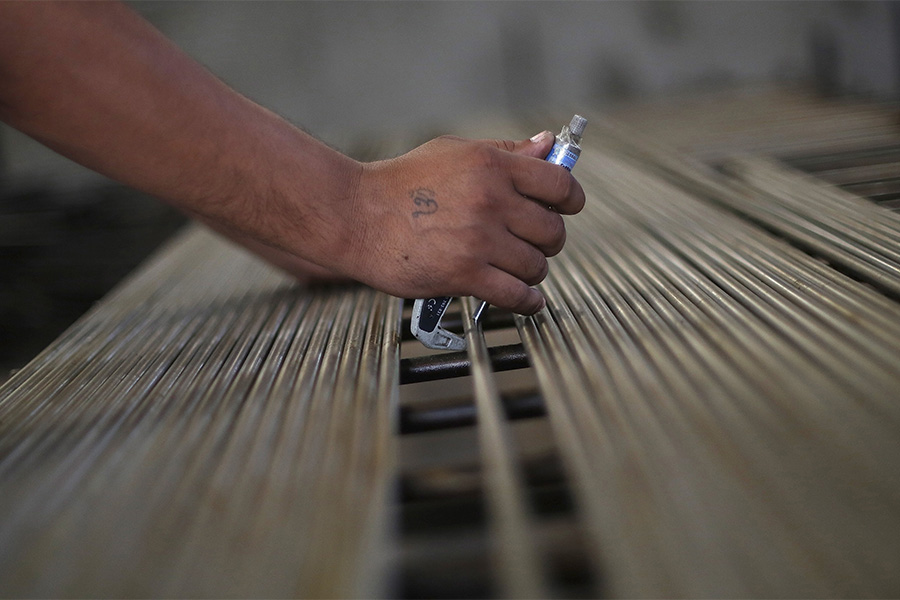 Image: Adnan Abidi / Reuters (For illustrative purposes only)
India’s JSW Steel reported a near tripling of its consolidated net profit for the three months to March 2017, fuelled by highest ever steel sales and production levels. The company reported a 235 percent surge in net profit to Rs 1,008.58 crore for the January to March 2017 period, compared to Rs 300.69 crore for the corresponding period a year earlier.
Revenues from operations jumped 60 percent in the fourth quarter, the company said, to Rs 16,952 crore, which was also a record.
Demand for steel in the domestic market remained weak due to poor liquidity in the post-demonetization phase, the company said in a media statement. But it offset this by stronger exports, with a better product mix. The company recorded a record production for the quarter at 4.10 million tonnes, up six percent sequentially and about 28 percent, from levels a year earlier.
JSW Steel also achieved its highest ever quarterly sales volumes of 3.96 million tonnes, growing nine percent sequentially and 20 percent, year-on-year.
JSW’s impressive earnings comes just a day after rival Tata Steel, the steelmaking arm of the salt-to-software conglomerate Tata Group, reported a narrowing of its net consolidated loss for the three months to March 2017, to Rs 1,168.02 crore, compared to Rs 3,041 crore for the corresponding quarter a year earlier, on the back of better operating performance.
In the case of Tata Steel, it said that while the loss for the quarter was after one-off items including non-cash pension curtailment charges, it appears to be on the road to recovery after years of stress on account of a slump in steel sales in Europe and India.
Experts tracking the sector are hopeful that the steel sector is starting to show early signs of a recovery in demand, after being challenged by factors like overcapacity and competition in the form of imports from other Asian markets of China and Japan.
Optimism is being built around the recent steel policy announced by the government, which aims to treble steel production in India by 2030 and meet local demand. The policy also looks towards spending more towards infrastructure and construction projects, which in turn will boost demand and increase utilization.
In its outlook, the JSW Steel management expects steel demand to “benefit from rising infrastructure spending and improving consumer demand in FY18". The company forecasts its crude steel production to grow by 4.4 percent in FY18 to an estimated 16.5 million tonnes (15.8 mt in FY17) and saleable steel sales to rise by 4.9 percent in the current fiscal year to an estimated 15.5 million tonnes (14.77 mt in FY17).
On Wednesday, JSW Steel said that with the ramp up of newly commissioned facilities, it reported record crude steel production growth of 26 percent year-on-year at 15.8 million tonnes, which turned out to be just above its guidance.
At the start of 2017, the company had commissioned the three blast furnaces (one each at Vijayanagar, Dolvi and Salem works) which were under shutdown for relining and modification. Post commissioning, the company has been able to stabilise and ramp up operations at new facilities and achieve an overall capacity utilization rate of 88 percent for the year.
The JSW Steel stock rose 2.48 percent to Rs 206.65 at the BSE, prior to the earnings announcement.