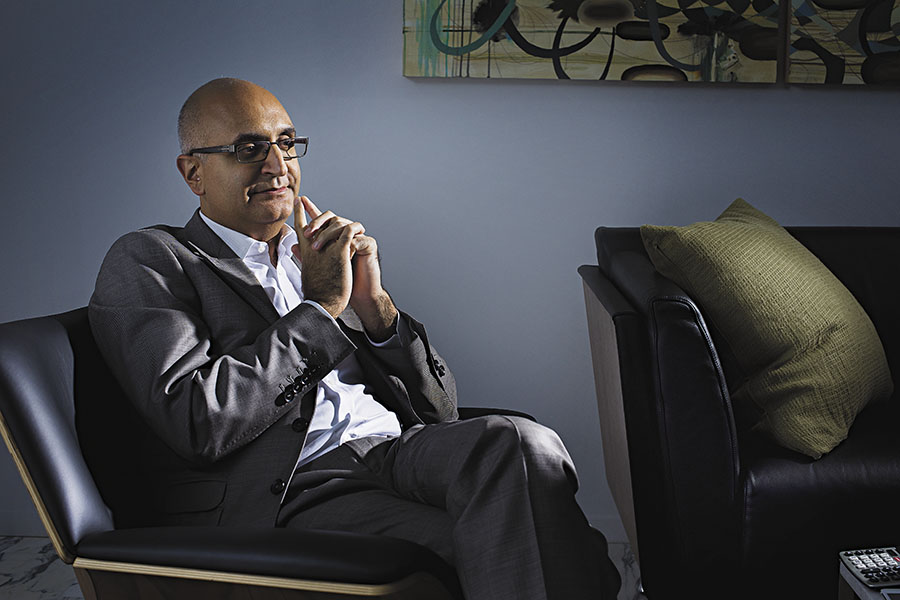 Amir Mossanen is not a psychologist but a Wells Fargo financial advisor
Image: Tim Pannell for Forbes

California sunlight is flooding into the Beverly Hills conference room where Amir Mossanen typically holds his family sessions over pizza and soft drinks. He opens a cabinet to show off the little rewards—a deck of cards, a miniature stagecoach figurine—that he gives to those who open up about their lives. Mossanen, 42, is not a psychologist but a Wells Fargo financial advisor with $1.8 billion under management.

Several years ago, Mossanen held what some might consider a family intervention with one of his best clients, an Iranian immigrant couple living in the Bel Air section of Los Angeles. They were worried about their youngest son, who had dropped out of USC, had little interest in the family electronics business and seemed to be drifting from startup to startup.

Mossanen questioned the young heir about his business ideas, his dreams and goals, his plan B if his startup didn’t work out and what he expected in terms of family assistance. Then Mossanen had another heart-to-heart talk with the parents, encouraging them to let their son continue on his entrepreneurial quest. It ended with the creation of the Tinder dating app, the crown jewel of Match Group, a Nasdaq-listed company with a market value of $6 billion.

“I think Amir helped my parents more than me,” says Tinder founder Sean Rad, 31. “The family business never really resonated with me, and I wanted to follow my own path.” In 2016, he delivered a commencement address at USC’s undergraduate business school, as his parents watched.

Gone are the days when asset allocation, investment selection and tax planning—all essentially commodities now—proved an advisor’s worth. But $30 trillion will pass to the millennial generation in the coming decades, and according to the seminal work Philanthropy, Heirs & Values by Roy Williams and Vic Preisser, seven out of ten estate transitions fail—meaning family wealth and/or harmony declines. That has given advisors a new mission and a way to keep their hold on the $7.8 trillion of high-net-worth business. If financial advisors ignore the needs of spouses and the younger generation, industry consultant Cerulli Associates warns, the assets they manage will sink when wealth is transferred.

Mossanen realised this in 2010, when a prospective client who was selling his business for $400 million said his biggest concern wasn’t whether he could manage his new wealth but whether it would leave his adult son directionless. Finding no satisfactory off-the-shelf answers, Mossanen built his own programme, done in nine two-hour-long sessions, to teach families to open up about their wealth and avoid the secrecy and resentment that inevitably bubble into a crisis.

His programme begins with seminars on investing and credit, and culminates with intimate tasks like defining individual goals and forecasting possible costs or risks. Every family member has to answer the same questions. Mossanen tries to bring out disagreements and even records sessions to be replayed later. This gauntlet takes two years, with a big payoff: The patriarchs and matriarchs have opened up about their wealth, and the younger generations have a framework for making good use of it.

“[For many clients] the golden rule is he who has the gold makes the rules,’’ Mossanen says. “Then when the dictator is no longer, they lash out and cannot make decisions together. The kids have been suppressed because they weren’t allowed to decide anything for themselves. They’re like people who have been holding their breath for too long.”

Of Mossanen’s 53 clients, 20 have participated in his novel programme. Wells Fargo (which has 13 advisors, including Mossanen’s team, on Forbes and Shook Research’s 2017 list of America’s Top 250 Advisors) plans to roll out his family process nationwide. “Our clients are literally knocking our doors down, demanding help in this area,” says Katherine Dean, recently named head of Wells Fargo’s Family Dynamics business.

UBS, too, has a dedicated unit working on family coaching. “We’re in the humanities and the emotional business,” says Judy Spalthoff, head of family and philanthropy advisory at UBS Americas.

After Ted Merchant, a co-founder of HealthCare Partners, sold the company to dialysis giant DaVita for $4.3 billion in 2012, he asked Forbes’s 55th-ranked advisor, Drew Freides of UBS Private Wealth Management, to help his three adult children adjust.  “When you’re dealing with these dollar numbers, we’re living at fairly high altitude, and we need to get used to the thin air,” says Merchant, 69.

When the Merchants’ now 35-year-old daughter seemed to be floundering, Freides arranged for her to attend UBS’ philanthropy programme for young heirs. She decided to dedicate herself to not-for-profit work. The family is now building a 3-acre community called Villa de Vida in San Diego County to serve adults with special needs, something they decided should be a priority because Merchant’s eldest son has autism.

Some advisors, such as HighTower’s Jordan Waxman, ranked No 42 on our list with $1.7 billion in custodial assets, find that a rigid structure around family decisions works best. Last summer, he oversaw the third out of what will be five “board meetings” for the family of MSNBC host Chris Matthews, his wife, Kathleen (former congressional candidate and current chair of the Maryland Democratic Party), and their three adult children. The goal of these annual Nantucket retreats is to offset the fears of passing down a fortune. “How to speak with our children about money caused us great anxiety,” the Matthewses say in an email. In year one, the Matthewses listed their critical family information—trusts, wills, foundations and asset portfolios—on a single page but didn’t share it with their heirs.

During the second retreat, each of their adult children presented a proposal for a philanthropy project, and its budget, in Shark Tank fashion. Addressing philanthropy first helps families define shared values and mission, Waxman says. In year three, the Matthewses agreed on other priorities (such as having the educations of grandchildren fully paid), and the parents finally showed the document listing their assets to everyone. This year, they will be refining critical issues like family governance. “Our children are engaged, more knowledgeable and more prepared,” the Matthewses say.

Since 2003, Waxman has overseen similar services for three to four families a year among his 90 clients, untangling issues of trust and control. “The goal is to create generations of stewards of wealth,” Waxman says. This extra service costs $16,000 a year, but, he says, “the return is kind of infinite”.

Tweets by @forbes_india
Ten interesting things that we read this week
The calls of Colombia: Bird watchers' delight