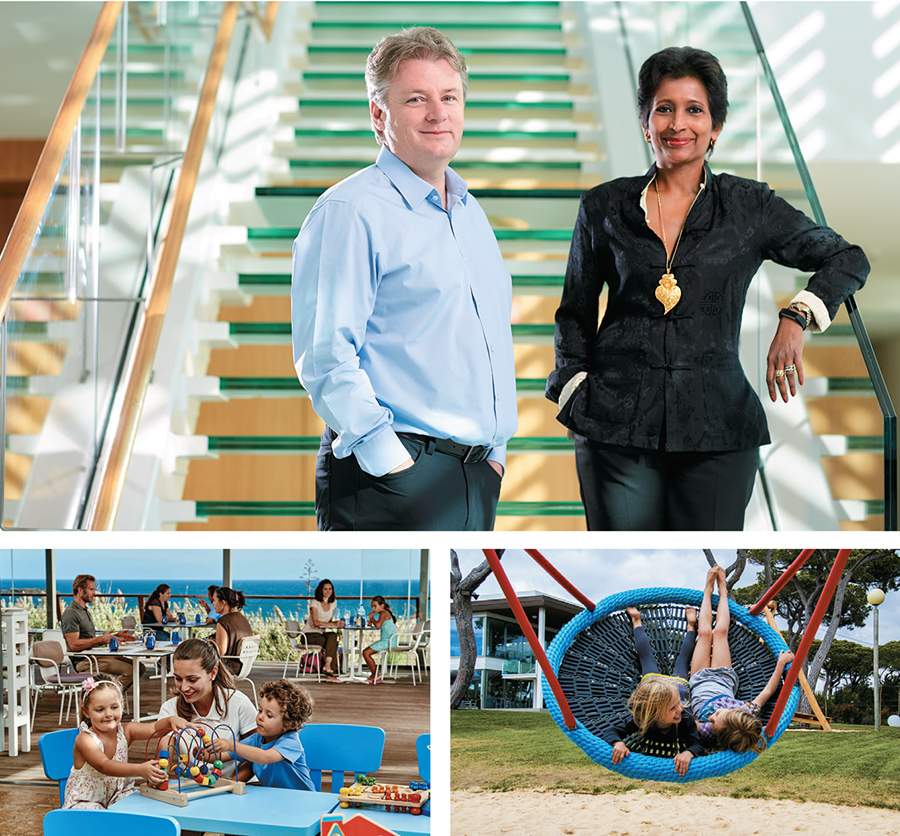 In the course of our stay at three of the four Martinhal Family Hotels and Resorts in Portugal, we witnessed typical cameos: High chairs decked with white napery and sturdy melamine crockery in an elegant fine dining restaurant, where a toddler petulantly flung a glass to check out the law of gravity. No one stared disapprovingly at the tyke. Meanwhile, another toddler chose to have a meltdown because he wanted to head back to the Kid’s Corner. A father pushed his infant son back and forth in a stroller to help him sleep, even as a couple of older kids chugged into the restaurant, with toy suitcases in tow. One night, a magician did the rounds of the tables, doing card tricks and, at breakfast the following morning, Rafi the fox, the hotel group’s mascot, strutted in to shake hands with the children who squealed with delight. There were fugitive and open smiles everywhere as parents looked on indulgently.

“Families, especially those travelling with kids, feel welcome here,” says Chitra Stern, 47, who, along with her husband Roman, 48, owns and runs Martinhal Family Hotels and Resorts. “Elsewhere, children are considered noisy and irritating. There are family-friendly hotels and resorts where the Kid’s Corner is an afterthought with a few toys. But we go the extra mile. At our resorts, children are the primary source of inspiration when providing service.”

Entrepreneur and multitasking mum of four, Singapore-born Stern, whose parents hail from Chennai, met her Swiss husband Roman while working in Munich. Today, you could call her a citizen of the world, for Portugal, where she has lived for 17 years, has also got under her skin.

The magnificent coastline and the champagne-coloured, cliff-backed beaches of the Algarve region is where they opened their first flagship property, Martinhal Sagres Beach Family Resort Hotel in 2010. It overlooks a sweeping beach on the south-western tip of Europe, once believed to be the end of the world. Subsequently, they opened three more resorts: Martinhal Quinta do Lago, surrounded by a golf course and the Ria Formosa Natural Park; the cosy and picturesque Martinhal Lisbon Cascais Family Hotel in the middle of two championship golf courses, a half-hour drive from Lisbon; and the Martinhal Lisbon Chiado Family Suites in a vintage building in the historic and fashionable heart of Lisbon.

The Martinhal group’s core philosophy that kids are the divas and potential repeat guests springs from the Sterns’ own experience with their children on holidays. “We would lug along bottle warmers, sterilisers, mobile cots, strollers and baby potties… the works,” says Stern. All of these items now figure on the Baby Concierge list of the hotels, which also include rooms with bunk beds. “Guests may request these to be put in their room in advance or ask for them after check-in. This allows parents to travel light, knowing that they don’t have to lug heavy luggage across the country or the world! Even today, our two sons and two daughters, who helped develop the product in a way, continue to give us feedback.”

‘Happy kids make happy parents’ is the raison d’etre of their family hotels and resorts. Indeed, Martinhal’s greatest gift of all is the luxury of time to harried parents. “Our guests don’t have to run after their kids, we do that for them,” says Stern, who is the recipient of several international accolades, including Person of the Year by Family Travel Association 2017, Amadeus Brighter Awards 2015, and London Business School Global Awards 2014. 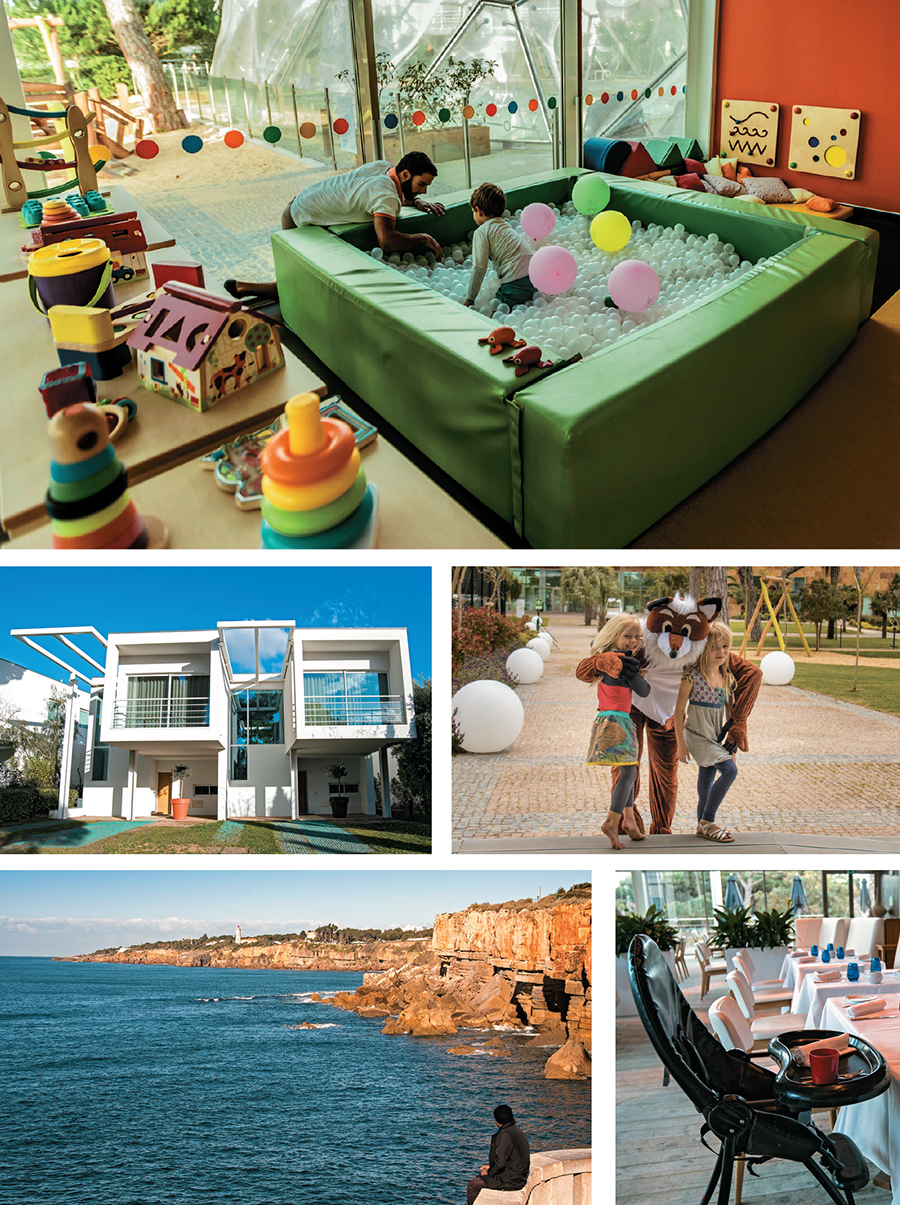 (Clockwise from top): A child enjoys at the Kid’s Corner; Rafi the fox, the group’s mascot; a high chair for babies at the fi ne-dining restaurant; sea cliff s at Cascais; a two-unit cottage at the Cascais resort
Images: Clockwise from top - Martinhal Family Hotels and Resorts; Gustasp And Jeroo Irani
The Sterns met in 1998 in Munich where, as consultants for PricewaterhouseCoopers in London, they were working on a project. They decided to venture out on their own, and chose the hospitality sector even though they did not have any prior experience in it. In 2001, when they began looking for business opportunities, they chose Portugal because “it was then the most undiscovered country in Europe,” remembers Chitra Stern. “At the time, highways and airports were being developed, and low-cost airlines were being launched. English is widely spoken in the country, and the people are friendly. We moved to Portugal and had four kids and four hotels.”

They arrived in Portugal with their first €1 million from previous projects they had worked on, and agreed on a staged payment for the 220,000 sq metres of land in Sagres, and took on bank financing where possible. Selling holiday homes on buy-to-let contracts enabled them to deleverage the bank financing. Their first project, Martinhal Sagres Beach Family Resort in Sagres, therefore, began as a real estate venture, where an independent resort was added in 2010. The Martinhal Lisbon Cascais Family Hotel in Cascais, and the Martinhal Lisbon Chiado Family Suites—for which the Sterns refurbished a 19th century townhouse—were developed on similar financing models, and opened their doors to guests in 2016. In 2015, Martinhal took over the management of the pretty, gated village of independently owned private villas, earlier known as Monte da Quinta Club in Quinta do Lago.

While in a standard luxury hotel, lashings of extravagance are expected, to focus on children’s needs requires greater thought and passion. “A family-friendly focus demands greater involvement from a hotelier,” says Seema Lodi, resident manager of the resort in Cascais. “In other hotels, you can walk down a buffet spread and ask for a few aesthetic changes. But at Martinhal, you have to think of healthy breakfasts, minus, say, sugar-drenched doughnuts; you have to offer lactose-free dairy milk and meals that are safe for children with allergies.”

It may seem like it’s child’s play but it’s serious business for the Sterns.

The writers travelled and stayed at the Martinhal Family Hotels and Resorts on the invitation of Avant Garde Consulting, which represents Martinhal in India

Tweets by @forbesindia
Rehabilitation saves not just elephants, but humans as well: WTI founder
Spy vs Spy: The best Cold War thrillers to read and watch