We turned headphones into a lifestyle accessory: Sennheiser CEO

Andreas Sennheiser, CEO of Sennheiser, talks about adding sound to virtual reality, and how the Sony Walkman played a secret role in its early success 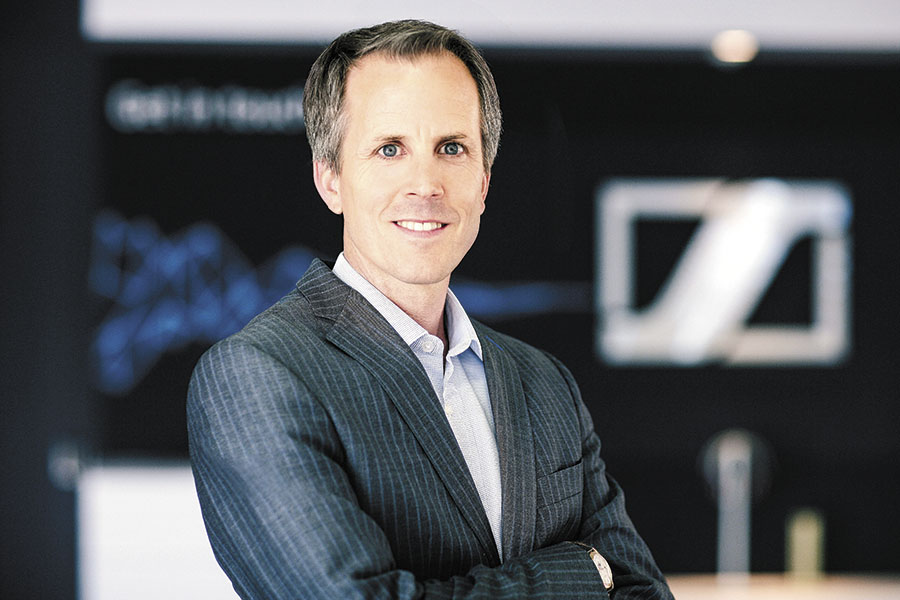 For quality sound, the outer part of a headphone is as relevant as its inner part, says Sennheiser CEO Andreas Sennheiser

Q. What are the key elements of a good pair of headphones?
One important thing is experience. Because building headphones is partly science, partly art, and a lot of trial and error through many decades. Sometimes our engineers know what doesn’t work, but can’t specify why. You have to have the experience of building excellent products a hundred times, a thousand times.
The second thing is what we try to do by keeping the design and every little part of our product under our control. Because there is so much influence on the material, you can neglect the small pieces if you don’t know how important they are.

Q. Is there some material that is more important than the others?
Of course, it is the transducer itself, what kind of diaphragm we are using. Then there is the ear cushion and the inner part of the headphone that make the biggest difference. It is not just about the sound, but also about how it smells, how it feels, how it looks… the outer part is as relevant as the inner part for the sound.
The material we use has evolved over the years; especially over the last five to seven years, we have focussed on quality material like real leather. We use Pittards glove leather for the outer part of the Momentum headphones because people love the texture; we use stainless steel to make it more durable.
On the inner side, a very good example is a material that took 10 years for us to find—a carbon and ceramic material. It is for the transducer. Because it was not possible to produce something as precise with the old available material.

Q. Sennheiser has a large number of patents. Are they more to do with product design or sound quality?
Both. We have a lot of patents on the products we make, but not on the manufacturing process. They are mainly functional patents that influence the quality of the product; it can be the sound, it can be the wireless transmission for the microphone. Also, in the last 10 years, we have had more patents to do with design, because that is a differentiator to which people are paying a lot of attention.

Q. Is this attention to design a shift within the company itself?
Yes. This started about eight to ten years ago where we took headphones from being a functional product to a lifestyle accessory, like a handbag. You have different models at home, and depending on your mood, you wear this or that. 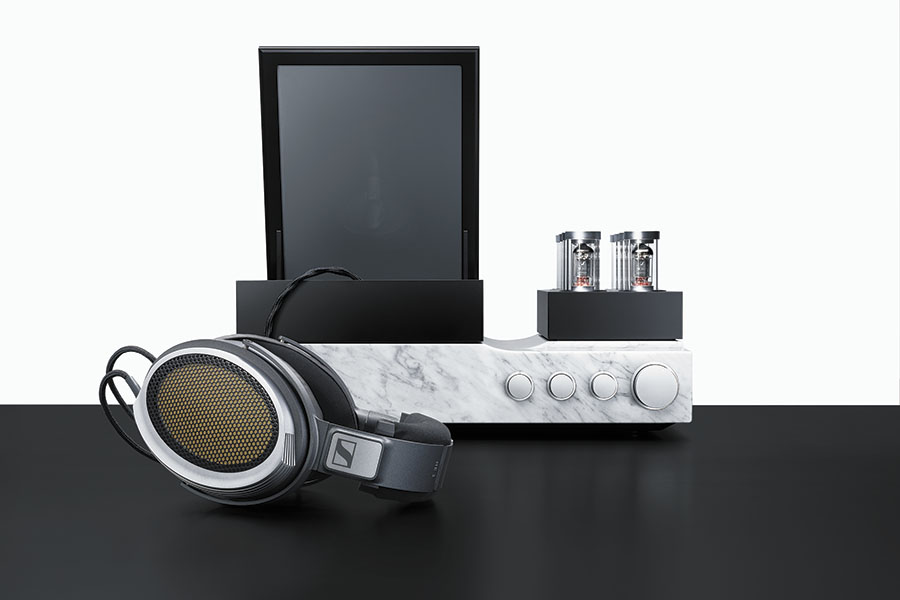 Sennheiser’s HE 1 is the successor to its Orpheus. Launched in late-2015, it is now available in India, with a jaw-dropping price tag of `45 lakh. Made only on order, each headphone set takes one day to assemble, compared to the several hundred standard headphones the company makes every day. The HE 1 uses an entirely new amplifier concept, combining the superior impulse processing of a tube amplifier with the low distortion of a transistor amplifier. It is housed in granular, inhomogenous Carrara marble, with the tubes enclosed in patent-pending quartz-glass bulbs


Q. How have headphones themselves evolved over the years, from being used at home or in studios to becoming an accessory to be flaunted?
Traditionally, there was always the mobile aspect of headphone usage, which connects to the image of headphones. There’s a funny story… we had a patent on open-air headphones, because we made the first hi-fi headphone in 1968. And Sony wanted to bring out their Walkman, and they needed our patent. So part of our success in the late 1960s, 70s and 80s was because Sony had their Walkman and they had to pay us royalty. So together we developed the mobile aspect of the headphones. They licensed the patent for the open-air headphones, and then made it themselves.

We had our own mobile line, which was also very successful. They could be used with the Walkman, the mini-disc. Now we have all kinds of players integrated into our phones. In that sense, the smartphone and the players that come with it have been the big driver of mobile music consumption from the mid-2000s.

Q. Was this the reason for Sennheiser’s shift of focus to design and mobility?
Definitely. The consumer electronic world was transformed as these products became an expression of your lifestyle. With that, all electronic accessories, like headphones, have been elevated in status. It made sound ubiquitous.

This shift is also connected to the rise of mp3 as a new format. But now we see a move towards hi-resolution digital formats because people who grew up with mp3 now realise that there is more to listen to. So we see the strongest growth in hi-resolution formats, and especially in India our strongest growth is in the category above `5,000.

Q. How is the HE 1 an improvement over the Orpheus, which was the best headphone of its times?
When we brought out the Orpheus in 1992, it was the best platform. But our engineers were aware of the limitations and the compromises they had to make in terms of material, the circuitry and available components. They already knew how to make the product better. But it took us more than 20 years to overcome those physical limitations to get the perfect sound reproduction. If you listen to the HE 1 with direct comparison [with the Orpheus], the most obvious difference is that the sound stage of the HE 1 is so wide that you immediately turn your head when you hear something coming from the left or the right. It also has a warmth to the sound that no other product has.

Q. What were these physical limitations of the ’90s?
It was, on the one hand, to do with the transducer design itself. It is to do with electrostatic principle: If you have to drive an electrostatic signal, you need high voltage. In this case, it’s 800V. To run 800V through a cable that is 2 or 3 metres long always results in a loss of sound quality. So we designed the dual-stage amplifier that has the pre-amp, using the valves. The sound travels on low voltage to the headphones. Then there is the second stage amplifier built inside the headphone that creates the high voltage. Then it is just a matter of millimetres before it reaches the listener.

The other thing was about how plain the diaphragm can be. That was not possible in 1992. The HE 1 has a diaphragm made of ceramic. The diaphragm in the Orpheus was made of glass. The other big invention is the coating of the diaphragm with platinum [by a process of vapourisation], which is just 4 microns thick. In 1992, we couldn’t do it, and now we can. It provides the sensitivity to produce the softest details.

Q. If you have not recorded the sound stereophonically, can you reproduce it stereophonically?
We have an algorithm that can widen the sound significantly. But, of course, the input quality determines a lot of the output quality. That is why we are working a lot on original remixes, like with Pink Floyd. [Sennheiser curated an exhibition, along with Pink Floyd and the Victoria and Albert Museum in London, where they did 3D mixes of the original content of Pink Floyd.] You have to have the original record, with all the tracks, to make it right. If there is a monotrack, there is only that much you can do with it. Besides the perfect reproduction, we are working on the microphone side as well.

The company started with microphones in 1945, and that’s our longest legacy. We work on improving the recording quality, especially with our brand Neumann, which has our high-end studio microphones. We are also defining how different scenes should be recorded to have the perfect sound.

Our umbrella brand Ambeo is positioned for virtual reality, for all kinds of different production situations. In virtual reality, everyone is focussed on the visual, and no one thinks about the audio. We put together all our expertise 2-3 years ago, and said we can be the company that delivers 3D sound to virtual and augmented reality.

We have a microphone called the VR Mic; it is like a 360-degree camera, but for sound. We have also published a blueprint, which instructs you how to record, say, a live concert in VR.

Q. Are you collaborating with any VR companies?
We are in close contact with those who are producing VR content. Facebook is just one of them. [Mark] Zuckerberg is focusing heavily on video and VR now. That was our strategy two years ago. If you want an augmented reality situation where you have a blend of the real world and virtual objects, the whole illusion falls apart.

We introduced and demonstrated the VR Mic in CES 2016. We co-developed it along with producers like Facebook and others, and launched it last November.

Q. Is that a line of products you are aggressively pursuing?
Yes. Under Ambeo, we have hardware products like the VR Mic. We have also announced the launch of a binaural recording headset, something you put into your ears, and then record with them. So you plug it into your smartphone, and then you film visuals. And because you have the in-ear plug-ins, your head functions like a recorder. It creates the perfect 3D sound. We will be launching it this summer. It is called the Ambeo Smart Headset.

Tweets by @forbes_india
Sensex at 31,000: the news continues to remain bullish, more upside seen
An intimate retreat in the Caribbean