Insurance Agents' Joyride May Soon Get Over

For long, agents have helped take insurance products to the people for fat commissions, of course. The joy ride may come to end soon

Insurance agents have had it good. So far. The Pension Fund Regulatory and Development Authority’s (PFRDA) decision to scrap commission of the agents within two years is causing a lot of unease in the agent community.

The three million agents servicing 188 million investors feel this is completely unfair and will affect the growth of financial products in India. Until now, agents used to get up to 60 percent of the premium on the first year when they sold insurance, especially if the product was a unit linked insurance plan (ULIP). Often this meant that the product they sold was not necessarily beneficial to the investor.
As a result, the individual’s plan would lapse when the investor stopped paying premiums after the first two years.
Data for 2007-08 shows that lapsation rates range between 4 percent and a shocking 80 percent. The lapsation rate for half of the 16 companies was more than 20 percent.
According to the Insurance Regulatory and Development Authority (IRDA), as of March 31, 2008, India had only 26 crore policies for a population of 100 crore. Of this, a bulk of the policies are related to investments. It could be money-back, endowment or ULIPs.
In many cases, the policies are front-loaded. If a ULIP charges 16.5 percent (industry average) commission over its entire life, agents collect 55-60 percent of the commission in the first premium and average it out by the last year. The distributors made money even if the policy lapsed. 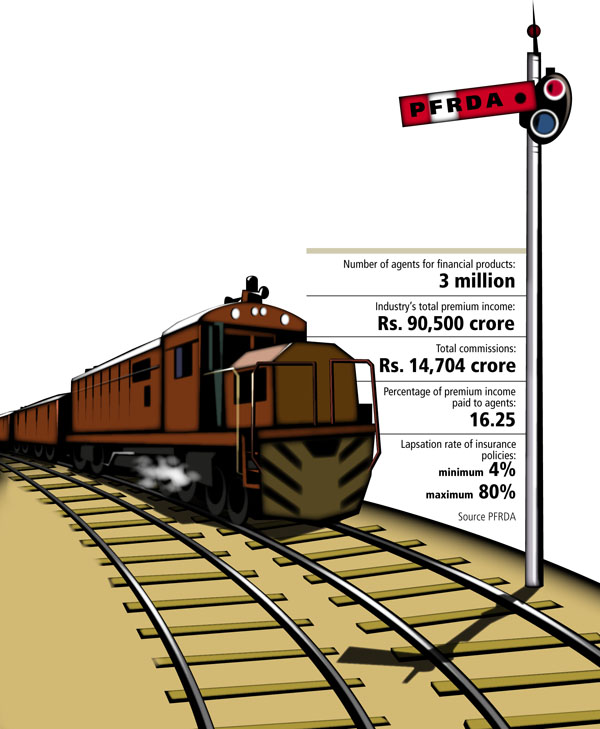 The commission and reward system today makes advisers the agents of the financial products manufacturer, but their compensation comes from the customer.
PFRDA’s Solution
The PFRDA wants to take care of the problem by removing commissions completely, just like mutual funds. Financial products will be made into services and agents who will also be
advisors and will get a fee for their services. There will be no reason to mis-sell the products.
What Experts Say
Most experts feel that PFRDA is taking an extreme step. They feel that all insurance products that also have an investment element in them should be brought under the Security and Exchange Board of India (SEBI) instead of IRDA. This primarily means that all ULIPs — where the most mis-selling occurs — will come under SEBI.
Experts say there should be a range of commission that should be applied. This could be up to 7.5 percent for ULIPs. And they should set up an authority that can evaluate regulations.
“Today if you look at the agents, they really do not have a body that will act as a platform. A committee of distributors will be in a better position to evaluate regulations. This has happened in the UK and it is time it happens in India as well,” says Rajesh Krishnamoorthy, managing director, iFast Financial India Pvt. Ltd.
Our Take
The PFRDA has made a bold move in phasing out commission and taking a fee-based approach. It is an extreme step and there will be pain in the initial stages. While all the steps suggested by the experts have merits, PFRDA’s basic agenda of removing commissions for the agents in the next two years and making the agent or financial advisor responsible for the product, is the best solution for the problem.