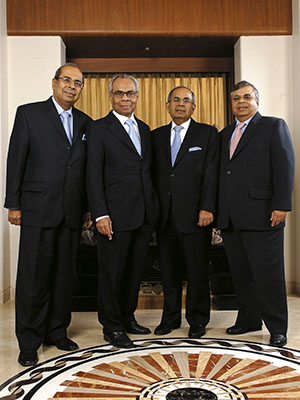 No. 9
Hinduja Brothers
$8 billion
Source: Diversified
Residence: London/Geneva/Mumbai
Brothers make their debut this year, courtesy a renewed focus on their Indian operations. Flagship Ashok Leyland has a 25 percent share of India’s commercial vehicles market; Other Indian assets include IndusInd Bank, which has a market cap of $3 billion. The four brothers—Srichand and Gopichand who live in London, Prakash who is in Geneva, and youngest Ashok in Mumbai—also have interests in defence, energy, petroleum, media and technology.

Fast Facts: They own Carlton Terrace House, a 70,000-sq ft mansion in London, which was originally commissioned by King George IV and stands close to Buckingham Palace.


No. 61
Glenn Saldanha
$1.03 billion
Source: Pharmaceuticals
Age: 41. Married, 2 children
Residence: Mumbai
Takes the spot of his father, Gracias, founder of Glenmark Pharmaceuticals, who died in July. A pharmacist with an MBA from New York University, he has been running the firm since 2000. He masterminded the $756-million (revenues) firm’s entry into drug discovery in 2001; it has seven new drugs in the pipeline and two licensing deals with big pharma companies. He shares his fortune with mother Blanche, who is on the board, and his siblings. 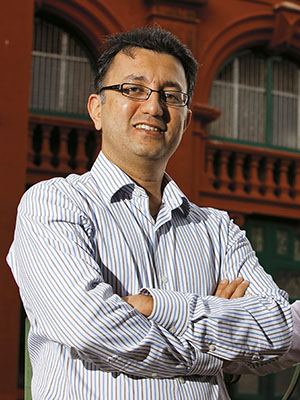 No. 63
Ranjan Pai
$975 millionSource: Education, healthcare
Age: 40. Married, 2 children
Residence: Bangalore
Head of Manipal Education & Medical Group, which operates six colleges and 15 hospitals, and has interests in stem cell therapy and clinical research. Grandfather started the business when he opened India’s first private medical school in Manipal, Karnataka, in 1953. His father took over after a bitter family split in 1978. Pai, who has a medical degree, quit his US job at the age of 28 and took over his family’s delayed medical school project in Malaysia. He succeeded, and has been with the business ever since, turning Manipal into a global brand in education.
Image: Mallikarjun Katakol for Forbes India


No. 66
Jitendra Virwani
$910 million
Source: Real Estate
Age: 46. Married, 4 children
Residence: Bangalore
Got a start in his father’s construction business as a teenager. In 1993, set up Dynasty Developers with $50,000 borrowed from friends; later renamed it Embassy Property Developments. Grew it into a leading developer of tech parks and office buildings for Bangalore’s IT and outsourcing firms, and multinationals. It has built nearly 30 million sq ft for customers like IBM, Nokia, Yahoo and others. In July, private equity firm Blackstone bought 49 percent stake in its commercial property portfolio for $200 million. The firm’s IPO has been postponed.


No. 75
Lachhman Das Mittal
$785 million
Source: Tractors
Age: 81. Married, 5 children
Residence: Delhi
Makes his debut this year after selling a stake in his privately held company, International Tractors, to private equity firm Blackstone in a deal that valued the business at $800 million. Son of a grain merchant from Punjab, he worked in life insurance before joining the family’s agricultural and farm equipment business in 1990.
It moved into tractor manufacturing in 1995. Today, the group, run by sons Amrit Sagar and Deepak, is the country’s third largest tractor maker, exporting to 70 countries; it makes the Rhino brand of utility vehicles.

Fast Facts: Its Sonalika tractor was named after a variety of wheat seeds instrumental in the success of India’s Green Revolution.

No. 81
Joy Alukkas
$700 million
Source: Retailing
Age: 56. Married, 3 children
Residence: Kochi/Thrissur
Son of a jewellery store owner, he skipped college and headed to the Gulf in 1987 to open the family’s first overseas store. Later, on his own, he created Joyalukkas, a jewellery retail chain. It had $1.3 billion in sales from 85 stores in India and the Gulf. He’s set to open the Mall Of Joy, a one-stop shop for weddings in Kozhikode, in January. Other business  interests include an air charter service and a helicopter service under the company’s aviation wing Joy Jets.

Fast Facts:  Its 58,000 sq ft store in Chennai is billed as the world’s biggest jewellery store.

No. 88
MAM Ramaswamy
$650 million
Source: Cement
Age: 81. Widowed, 1 child
Residence: Chennai
The third generation head of century-old conglomerate Chettinad Group makes debut, thanks to a jump in value of its Chettinad Cement, in which he and his family own 88.44 percent; its shares gained 72 percent in the past year, mainly on news that it had been planning to go private. Grandfather Rajah Sir Annamalai Chettiar started the business in 1912, and later co-founded what is now the government-owned Indian Bank. Ramaswamy is passionate about horses and owns two stud farms near Chennai that have won over 400 Classics. He was recently elected chairman of the Madras Race Club. 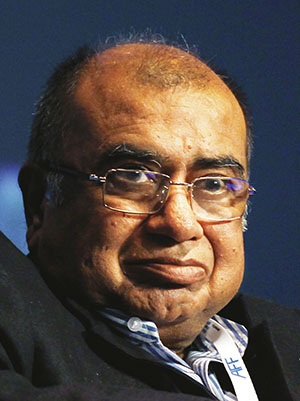 
No. 91
Vikram Lal
$630 million
Source: Automobiles
Age: 70. Married, 3 Children
Residence: Delhi
The German-trained engineer returned to India in 1966 to join the family’s Eicher Tractors, founded by his father. He ran it for three decades until 1997, when he handed over reins to son Siddharth. Their listed Eicher Motors is India’s third largest maker of commercial vehicles and has a joint venture with Volvo to make trucks and buses. It is also known for its iconic Royal Enfield motorcycles, which it acquired in 1990. He now spends time volunteering at non-profits like Common Cause, a public interest organisation, the Shroff Charity Eye Hospital in Delhi and the Goodearth Education Foundation.


No. 97
BR Shetty
$540 million
Source: Healthcare
Age: 70. Married, 4 children
Residence: Abu Dhabi
Trained pharmacist, he got started by selling medical products door-to-door when he arrived in Abu Dhabi from India in 1973. Went on to open health clinics, which later became, New Medical Center (NMC), UAE’s largest hospital chain with five specialty hospitals, and a major distributor of consumer and medical products. Listed company in London in April; retains 21 percent stake. Other big asset is UAE Exchange, a global money transfer firm he co-founded in 1980 to cash in on the growing expatriate population in the Middle East looking to send money home. It has 600 branches in 30 countries and handles remittances of $19 billion annually. Owns two floors of Burj Khalifa, Dubai’s tallest building. Shetty disagrees with our estimate of his net worth but would not explain why. 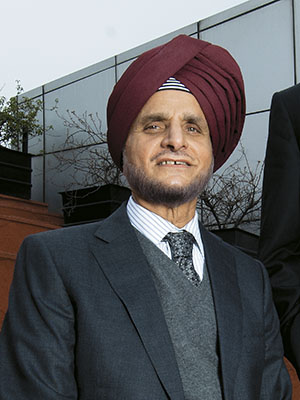 No. 99
Onkar Kanwar
$510 million
Source: Tyres
Age: 70. Married, 3 Children
Residence: Delhi
Father Raunaq Singh founded Apollo Tyres in 1976. He took control as chairman in 2002, after a prolonged public spat with his father, and has grown it into one of India’s largest tyre makers, with revenues of $2.5 billion, and factories in India, Netherlands and South Africa. It has marketing rights to the Dunlop brand in Africa and Vredestein in Europe, and is said to be negotiating a deal with US-based Cooper Tire & Rubber. He debuts on the list after shares of his flagship gained 60 percent amid a rally in tyre stocks sparked by a fall in rubber prices. Younger son Neeraj is Apollo’s vice chairman and joint MD. Older son Raaja runs the international arm.
Image: Amit Verma

Fast Facts: Has diversified into healthcare, with superspecialty hospitals under the Artemis brand in northern India.