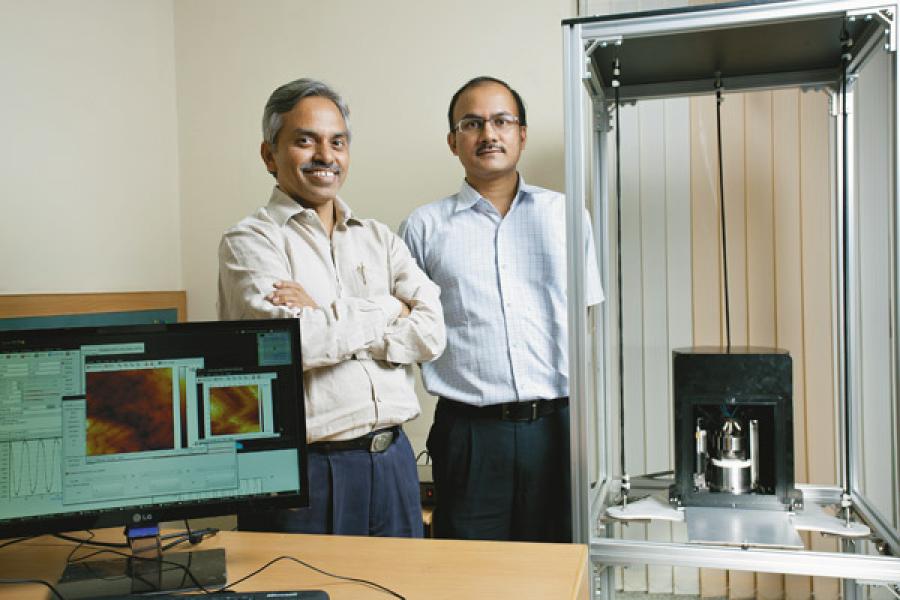 It was at the Swiss research institute EPFL in Laussane in 2006 that Rudra Pratap first met Ashwin Lal. Pratap was then a visiting professor at EPFL. Lal’s one-man-lab was building microscopes. Not the table-top instruments that we’ve all used in high school laboratories, but scanning tunnelling microscopes (STM) that look at surfaces at the atomic scale and provide images, atom by atom.

At the Indian Institute of Science in Bangalore, Pratap was also building something: A state-of-the-art Centre for Nano Science and Engineering (CeNSE), funded by the ministry of communications and information technology.

In the global race for nanotechnology, Indian institutions are miserably placed, producing less than 100 PhDs every year, compared to, say the US, which produces 4,000. India’s goal now is to increase it to 1,000 by 2014. For the Rs 200 crore-centre to be optimally used, colleges across the country need to change the way they teach.

Nanotech is taught at most places without any feel for it, says Pratap. “This course today is no different from reading Shakespeare or a course in sociology.”

So, his “singular motivation” was to enable students to see what’s so dramatically different at nano scales. (For perspective, one human hair strand is 100,000 nanometres. With the naked eye we can see about 10,000 nm; optical microscopes can see things only as small as 200 nm.)

One effective way to bring disruption, Pratap thought, would be to team up with Lal to start a company that would build a series of inexpensive, customisable instruments that allow researchers, students and industry to study and build nanotech products.

For early-stage investment, Pratap approached his long-time friend from Cornell University, Ajay Singh. A technocrat, ex-promoter of SpiceJet and founder of Argentum group of companies, Singh parked Rs 5 crore in i2n. Having been an advisor to the ministry of IT in the past, he says he has seen good technologies from institutions never make it to the market. At i2n, he has confidence in his own business acumen as well as the founders. “RP [Pratap] is not only the leader in his [technical] field, but understands the real [commercial] world,” he says.

Singh is not expecting a handsome payout here; he believes some investors ought to buck the trend and fund startups that promise to create wealth based on intellectual property.

The rarefied world of precision instruments doesn’t offer a mass market. Lal says that beyond the estimated Rs 300-400 crore microscopy market in India, there’s scope to branch out in related fields in defence (offsets particularly), aviation and space. Additionally, going by the prevalent poor level of support from the multinationals—a pain point for all buyers today—services offer a lucrative opportunity.

Customers see value in their proposition. The first to sign up is the physics department at Columbia University, New York, where professors want customised, knocked-down machines that students can play around with.

Given the technology explosion of the last 20 years, there is a fairly big disconnect between what is taught in a lab and what is used in the engineering or research workspace. While some manufacturers make educational tools, since it’s not their core market, the solutions are not adequate. Experts say it’s here that i2n can establish itself. It has found customers at institutions including IISc and IIT-Delhi and in the biotech and defence sectors.

The initial idea was to sell to colleges, but i2n is busy signing up research centres as purchase decisions are faster. All the 40 colleges that i2n demonstrated its products to wanted to buy them but since it’s the principal who decides, not the faculty, purchase orders get delayed.

Three more CeNSE-like centres have been sanctioned by the ministry for the IITs in Delhi, Chennai and Kharagpur at Rs 50 crore each. More colleges will rally around these centres, he is convinced.

As chairman of CeNSE and i2n, Pratap wants to dent the “collective rigidity” of educational institutions.

“We need hundreds of startups to engage the students that come from these centres, or else we’ll only prime them to flee overseas.”