You know those events that practically guarantee tightness in the chest and brimming of the eyes?

Bahrain Grand Prix
A rare instance of the original following the clone. Two years after Vijay Mallya’s Force India began zooming on Formula One tracks, Richard Branson’s Virgin Racing will join him at the inaugural Bahrain Grand Prix. The 61st season of F1 will also see Campos Meta 1, the US F1 Team and Lotus F1 Racing hitting the circuits. Year 2009 was a bad one for the sport with the hugely publicised fall-out between the team owners and the F1 management, the Renault controversy following the Piquet crash and the withdrawal of Japanese giant Toyota. Here’s to a new season that focusses on the drivers and the cars, rather than the squabbles outside. March 14, Bahrain, UAE

Final Round of the Augusta Masters
Tiger Woods has not won the US Masters since 2005. Even if Elin permits him to play the tournament, it seems unlikely that his record will improve. The first of the four major championships in professional golf, the Augusta National is known for modifying the course every few years. In 2006, the course was lengthened by 200-odd yards. There have been changes every four years this decade, and the 2010 major could be the last time we see the course in its current format. April 12, Augusta, Georgia, USA 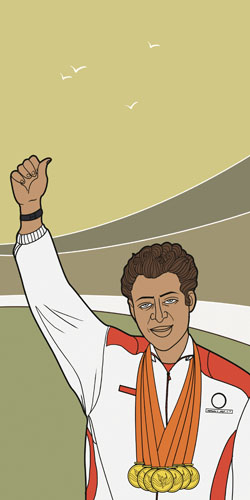 Image: Aditya Chari
T20 World Cup final
The 2007 World Cup in the West Indies was a shambles: No musical instruments allowed, empty stadia and listless crowds. The International Cricket Council and the West Indies Cricket Board have a chance to rectify their mistakes with the T20 World Cup next summer. Hopefully, the young Indians will have learnt to play the short ball, Australia will have got over its T20 psychosis and Pakistan will try not to self-destruct under Shahid Afridi (or whoever is the captain at the time). Our picks for the final: West Indies vs England. May 16, Barbados
Champions League finals
It doesn’t matter which European club giant — and it will almost certainly be a giant, gone are the days of the under-dog — lifts the cup in 2010, the tournament is a must-see just for the spectacular Bernabeu. Home to Real Madrid, this is a rare occasion when the final will be held on a Saturday rather than the traditional Wednesday. Title defenders Barcelona play a beautiful game and still lift titles, while Chelsea and Manchester United will be aiming for an all English final. May 22, Santiago Bernabeu Stadium, Madrid, Spain
Nadal against Federer at the French Open
Yes, we are taking a punt. Rafael Nadal will face off against Roger Federer to reclaim his place as the king of Roland Garros. It will have been a whole year since Rafa made an early exit from the clay courts at Paris and he will be looking to get his mojo back. What better way to do it than taking a huge bite out of a Swiss chocolate? June 6, Roland Garros stadium, Paris