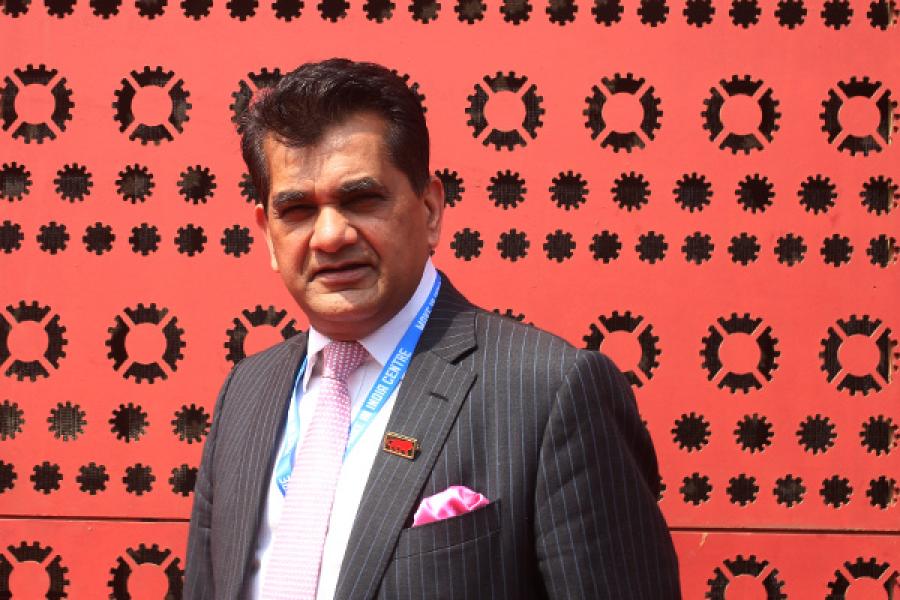 Niti Aayog CEO, Amitabh Kant
Image: Joshua Navalkar
India is projected to achieve a growth rate of 7.4 percent in 2017. Going forward, in 2018, it could go up to 7.6 percent in the backdrop of strong consumption. However, the desired growth rate is much higher and that can be achieved if the youth comes forward with innovative ideas in sectors including education, said Niti Aayog CEO, Amitabh Kant.

“We need to change students from studying books to solving problems of the country,” said Kant while addressing students at IIT Delhi in a week-long education HackWeek on artificial intelligence (AI) that’s ending on August 4.

The government, too, on its part is doing its bit to woo youngsters and make India more innovative and dynamic by creating the right ecosystem for startups. “We already have an Atal Tinkering Lab that is supporting tinkering labs in schools and supporting incubators,” said Kant urging students to come up with their innovations in education technologies.  “Recent developments in machine learning and AI have created unprecedented opportunities to solve the critical issues of personalisation, scale, and quality in our education system. We at NITI Aayog are committed to harnessing such technologies to shape a better future for India” added Kant.

In the hackweek organised by OpenEd.ai, a non-profit organisation, top 4 winners will receive a total of $17,000 in prizes for their open-source AI projects that have the capacity to solve problems in education.

So far, research and applications have favoured well-capitalised industries in the field of robotics, autonomous vehicles, enterprise intelligence (big data analytics, sales, advertising), among others.

The hackweek organised in IIT Delhi is backed by NITI Aayog, venture capitalist Omidyar Network, tech giant IBM, Amazon Web Services, and Google Developer Groups. As many as 1,200 people have signed in to participate and this includes students from MIT, Harvard, Stanford, the various IITs, to name a few.