A record number of 1826 billionaires contribute to the list. Added together, the total net worth for this year's billionaires was $7.05 trillion, up from $6.4 trillion last year. 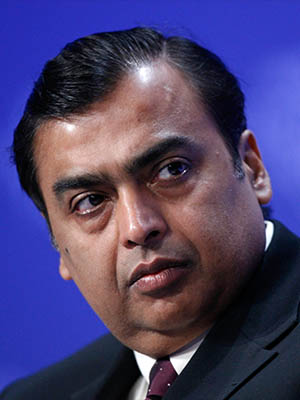 Mukesh Ambani retains his top position as the richest Indian on the Forbes World Billionaires List with a networth of $ 21 billion. He has moved up one place on the global rich list which has been topped by Microsoft founder Bill Gates.

This year there are 90 Indians on the Forbes Rich List 2015, Ambani (39th globally) is closely followed by pharmaceuticals tycoon  Dilip Shanghvi (44th rank, with a networth of $ 20 billion) and Azim Premji (48th with $ 19.1 billion).
Technology guru Bill Gates has once again topped as the world’s richest person on Forbes’ 29th annual ranking of the world’s billionaires .  He has topped the list for 16 of the last 21 years, with a current net worth of $79.2 billion, up from $76 billion in 2014.

For the second consecutive year, Gates has managed to beat out telecom mogul Carlos Slim Helu who came in at number 2 and whose net worth increased to $77.1 billion from $72 billion last year. Warren Buffett moved up one slot to number 3, with a net worth of $72.7 billion, ahead of Spanish clothing retailer Amancio Ortega, who increased his net worth $500 million for a total of $64.5 billion and came in at number 4. Ortega is known for his famous Zara clothing line. Compared to last year’s list, Mark Zuckerberg, with a net worth of $33.4 billion, made it into the top 20 for the first time at number 16.

Oracle’s Larry Ellison remained in the fifth spot as his net worth increased to $54.3 billion.  A record 1,826 billionaires made it to the list, with an average net worth of $3.86 billion (down $60 million from $3.92 billion in 2014). Previously, this number was pegged at 1,645 in 2014.A record number of women made the list this year: 197 versus 172 in 2014, representing an increase of 15%. 29 of these women are self-made billionaires. A notable newcomer included the world’s youngest billionaire, Evan Spiegel at number 1250. Evan aged 24 hails from U.S., with a net worth of $1.5 billion.  Notably missing from this year's list was U.S. fashion designer Michael Kors and Ukraine President Petro Poroshenko.

The biggest net worth gainer was Warren Buffett at number 3, whose fortune increased by $14.5 billion for a total net worth of $72.7 billion, as Buffett’s Class A Berkshire Hathaway stock eclipsed $200,000 per share for the first time and continued to climb.

Added together, the total net worth for this year’s billionaires was $7.05 trillion, up from $6.4 trillion last year. A total of 1,191 members, or roughly two-thirds of the list, were self-made billionaires while 230 inherited their wealth. Another 405 inherited at least a portion but are still growing it.

The most recognizable athlete of all time, Michael Jordan at number 1741, is new to the billionaires list, thanks to his well-timed investment in the Charlotte Hornets. He acquired a majority stake in 2010 for $175 million and increased his ownership to 90% in 2013. Then NBA franchise values shot up last year, following the sale of the LA Clippers to Steve Ballmer for $2 billion. Other NBA owners now in the billionaire ranks include the Houston Rockets’ Leslie Alexander at number 1190, with a net worth of $1.6 billion and the Chicago Bulls’ Jerry Reinsdorf at number 1415 with a net worth of $1.3 billion.

Also in the list is American gambling tycoon Sheldon Adelson at number 18. He dropped out of the top ten from eighth place last year. His net worth dropped by $6.6 billion, more than anyone else in the U.S. China’s government crackdown on graft led to the sudden halt of the explosive gambling industry in Macau, where Las Vegas Sands boss Adelson controls 57 million square feet of resort space in the Asian gambling mecca.

Thanks to the tech boom and a strong dollar in the currency markets, the U.S. led with the greatest number of billionaires, with 536, followed by China with 213, Germany with 103, India with 90 and Russia with 88.  The year’s biggest loser was Aliko Dangote, whose net worth decreased from $25 billion in 2014 to $14.7 billion this year. Wealth is stretching to new corners of the world, with one new country, Guatemala, represented on the list with new billionaire Mario Lopez Estrada at number 1741. Iceland returns to the list this year, with billionaire Thor Bjorgolfsson at number 1415.

California has 131 billionaires, more than any country besides the U.S. and China.  Regionally, Asia-Pacific boasted the most billionaires, with 562 billionaires, followed by the United States with 536 and Europe with 482.

Currency markets and political turmoil have had a significant effect on this year’s list, and a strong dollar helped the U.S. while fortunes in Europe decreased due to a weaker euro versus the US$. The industry with the most newcomers is food and beverage with a total of 46 billionaires, followed by manufacturing with 38 and healthcare with 34.

Tweets by @forbesindia
How to break the expert's curse
Podcast: Ecommerce in India