The investigation includes a review of the bank's handling of so-called suspicious activity reports that its employees prepared about possibly problematic transactions, including some linked to President Donald Trump's son-in-law and senior adviser, Jared Kushner 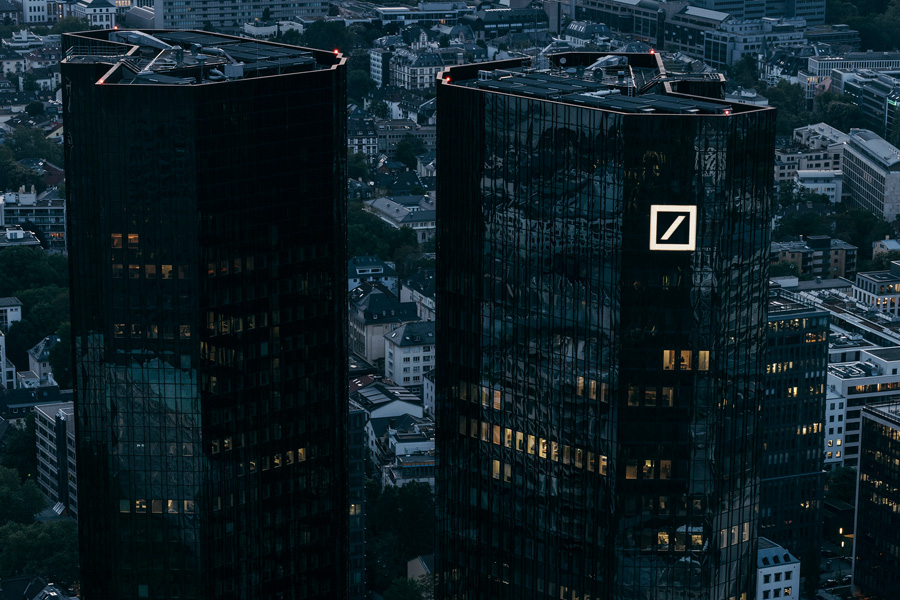 Outside the headquarters of Deutsche Bank, in Frankfurt, Germany, May 7, 2019. Federal investigators are focused on whether the bank complied with anti-money-laundering laws, including in its review of transactions linked to Jared Kushner. (Felix Schmitt/The New York Times)

Federal authorities are investigating whether Deutsche Bank complied with laws meant to stop money laundering and other crimes, the latest government examination of potential misconduct at one of the world’s largest and most troubled banks, according to seven people familiar with the inquiry.

The investigation includes a review of Deutsche Bank’s handling of so-called suspicious activity reports that its employees prepared about possibly problematic transactions, including some linked to President Donald Trump’s son-in-law and senior adviser, Jared Kushner, according to people close to the bank and others familiar with the matter.

The criminal investigation into Deutsche Bank is one element of several separate but overlapping government examinations into how illicit funds flow through the U.S. financial system, said five of the people, who were not authorized to speak publicly about the inquiries. Several other banks are also being investigated.

The FBI recently contacted the lawyer for a Deutsche Bank whistleblower, Tammy McFadden, who publicly criticized the company’s anti-money-laundering systems, according to the lawyer, Brian McCafferty.

McFadden, a former anti-money-laundering compliance officer at the bank, told The New York Times last month that she had flagged transactions involving Kushner’s family company in 2016 but that bank managers decided not to file the suspicious activity report she prepared. Some of her colleagues had similar experiences in 2017 involving transactions in the accounts of Trump’s legal entities, although it was not clear whether the FBI was examining the bank’s handling of those transactions.

The same federal agent who contacted McFadden’s lawyer also participated in interviews of the son of a deceased Deutsche Bank executive, William S. Broeksmit. Agents told the son, Val Broeksmit, that the Deutsche Bank investigation began with an inquiry into the bank’s work for Russian money launderers and had expanded to cover a broader array of potential misconduct at the bank and at other financial institutions. One element is the banks’ possible roles in a vast money laundering scandal at Danish lender Danske Bank, according to people briefed on the investigation.

The broader scope of the investigations and many details of precisely what is under scrutiny are unclear, and it is not known whether the inquiries will result in criminal charges. In addition to the FBI, the Justice Department’s Money Laundering and Asset Recovery Section in Washington and the U.S. attorney’s offices in Manhattan and Brooklyn are conducting the investigations. Representatives for the agencies declined to comment.

Deutsche Bank has said that it is cooperating with government investigations and that it has been taking steps to improve its anti-money-laundering systems.

Even so, the governmental scrutiny — from regulators, members of Congress and now the Justice Department and FBI — has been a drag on the bank’s stock price, which is hovering near historic lows because of investors’ doubts about its future.

The congressional investigations are focused on Deutsche Bank’s close relationship with Trump and his family. Over the past two decades, it was the only mainstream financial institution consistently willing to do business with Trump, who had a history of defaulting on loans. The bank lent him a total of more than $2 billion, about $350 million of which was outstanding when he was sworn in as president.

Two House committees have subpoenaed Deutsche Bank for records related to Trump and his family, including records connected to the bank’s handling of potentially suspicious transactions. The president has sued to block Deutsche Bank and Capital One, where he also holds money, from complying with the subpoenas. A federal judge rejected Trump’s request for an injunction, and the president has appealed that ruling.

The Justice Department has been investigating Deutsche Bank since 2015, when agents were examining its role in laundering billions of dollars for wealthy Russians through a scheme known as mirror trading. Customers would use the bank to convert Russian rubles into dollars and euros via a complicated series of stock trades in Europe and the United States.

In early 2017, federal and state regulators in the United States and British authorities imposed hundreds of millions of dollars in civil penalties on Deutsche Bank for that misconduct, but prosecutors never brought a criminal case against the bank. That led some senior Deutsche Bank executives to believe they were in the clear, according to people familiar with their thinking.

By last fall, though, federal agents were investigating a wider range of anti-money-laundering lapses and other possible misconduct at the bank.

FBI agents met this year with Val Broeksmit, whose father was a senior Deutsche Bank executive who killed himself in January 2014. Broeksmit said he had provided the agents with internal bank documents and other materials that he had retrieved from his father’s personal email accounts.

Until his death, William Broeksmit sat on the oversight board of a large Deutsche Bank subsidiary in the United States, Deutsche Bank Trust Co. Americas, which regulators have criticized for having weak anti-money-laundering systems.

Many of the bank’s anti-money-laundering operations are based in Jacksonville, Florida, where McFadden was one of hundreds of employees vetting transactions that computer systems flagged as potentially suspicious.

McFadden told The Times that she had warned in summer 2016 about transactions by the Kushner Cos. involving money being sent to Russian individuals. Other Deutsche Bank employees prepared reports in 2017 flagging transactions involving legal entities associated with Trump, including his now-defunct charitable foundation, according to current and former bank employees. In both instances, the suspicious activity reports were never filed with the Treasury Department.

Deutsche Bank officials have said that the reports were handled appropriately and that it was not uncommon for managers to overrule employees and opt not to file suspicious activity reports with the government.

There is no indication that Kushner Cos. is under investigation. The company said any allegations regarding its relationship with Deutsche Bank that involved money laundering were false. A Trump Organization spokeswoman said that she had no knowledge of any Deutsche Bank transactions being flagged.

The federal Bank Secrecy Act requires financial institutions to alert the government if they suspect that transactions involve criminal proceeds or are being used for illegal purposes. Banks can face civil or criminal penalties for failing to file reports about transactions that are found to be illegal. In recent years, banks like JPMorgan Chase and HSBC have incurred such penalties.

Banks argue that when they err on the side of reporting potential problems, they end up flooding the government with false leads.

Former Deutsche Bank employees, speaking on the condition of anonymity, told The Times that the company had pushed them to rush their reviews of transactions and that managers sometimes created obstacles that discouraged them from filing suspicious activity reports.

Deutsche Bank has scrambled to toughen its anti-money-laundering procedures.

To address complaints about inadequate staffing, it brought in contractors to supplement its Jacksonville workforce, although some employees said that the contractors were inexperienced and lacked the appropriate training.

Deutsche Bank also recently sent letters to hundreds of companies, warning that they could be cut off from the bank’s services if they did not swiftly provide up-to-date information about the sources of their money and the names of their business partners, according to bank employees who saw the letters. Deutsche Bank officials said the letters, first reported by the Financial Times, were part of their efforts to comply with “know your customer” rules, a crucial component of any bank’s anti-money-laundering efforts.

In Jacksonville, Deutsche Bank’s anti-financial-crime staff works in a white, three-story building surrounded by palm trees. The FBI has a field office just down the road, clearly visible from the bank’s campus.

Bank employees recently have taken to joking that when the FBI raids their offices, they will be able to see the agents coming.

Tweets by @forbes_india
After Maruti Suzuki, Renault will stop selling diesel cars in India next year
World Refugee Day: The search for a land of freedom