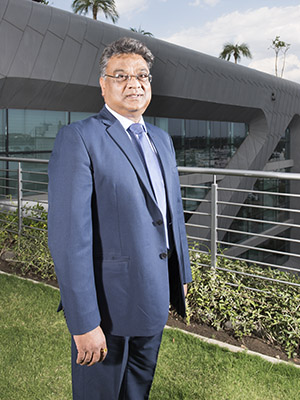 Image: Amit Verma
For as long as he can remember, Dilip Suryavanshi, chairman and MD, Dilip Buildcon, never wanted to work for anyone

Dilip Buildcon listed its shares on the stock exchanges on Thursday, at a price of Rs 240 per share or a 9.5 percent premium over its issue price of Rs 219 and closed at Rs 252.55.

The initial public offering (IPO) which opened up for subscription between August 1-3 had a price band of RS 214-219. The issue was oversubscribed by 21 times. The Qualified Institutional Buyers (QIB) portion was oversubscribed by 9.76 times, Non Institutional Investor (NII) portion by 79.64 times and retail investor category by 2.35 times. The issue raised Rs 654 crore.

Proceeds of the issue will be used for prepayment of term loans to the tune of Rs 202.38 crore and for the use of working capital requirements at Rs 200 crore.

Dilip Buildcon is one of India's leading private sector road-focused EPC contractors. According to its prospectus, during the last five Financial Years ended March 31, 2015 and the six months ended September 30, 2015 they have completed construction of 51 road projects in the states of Madhya Pradesh, Gujarat, Himachal Pradesh, Rajasthan and Maharashtra in India, with an aggregate length of approximately 5,858.49 lane kms, achieving a CAGR of 58.44% of revenue growth on a consolidated basis for the five Financial Years ended March 31, 2015. As of September 30, 2015, the company owns an equipment fleet of 6,604 vehicles and other construction equipment.

The core business is undertaking construction projects across India in the roads and irrigation sectors. The company specialises in constructing state and national highways, city roads, culverts and bridges.

Dilip Buildcon has recently expanded into urban development. As of September 30, 2015, the company had an order book of Rs 10,332.38 crore consisting of 48 third party. It closed FY2016 with a topline of Rs 4,000 crore. Its annual profit after tax is estimated at Rs 250 crore in the period, making it one of the largest road building companies in the country.