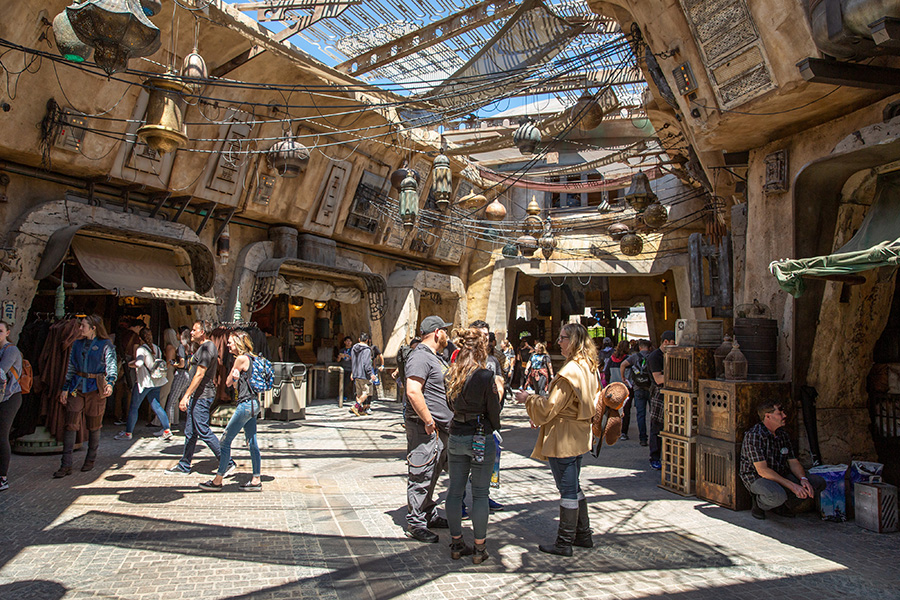 A shopping bazaar at the new Star Wars: Galaxy’s Edge expansion at Disneyland Park in Anaheim, Calif., May 20, 2019. Disney's 2019 profit was down 51 percent from a year earlier as assets acquired from 21st Century Fox underperformed and losses from streaming mounted. (Beth Coller/The New York Times)

The Walt Disney Co. reported weak quarterly results Tuesday, the result of escalating streaming-service losses, underperforming 21st Century Fox assets and lower-than-expected theme park attendance.
In its first full quarter since closing a $71.3 billion deal to acquire most of Rupert Murdoch’s Fox entertainment businesses, Disney had a profit of $1.44 billion, a 51% decline from the comparable period a year earlier. Disney missed Wall Street’s revenue expectations by roughly $1 billion. Disney shares fell more than 3% in after-hours trading, to around $137. Robert Iger, Disney’s chief executive, said the difficult quarter was part of a “strategic transformation” underway at Disney, the world’s largest entertainment company. Disney is trying to become less dependent on cable channels like ESPN, which are in decline because of cord-cutting, and move into the rapidly growing realm of online video, a direct-to-consumer business defined by Netflix. Disney bought certain 21st Century Fox assets to enhance its streaming plan, which includes a subscription service called Disney Plus. Disney Plus is to arrive in November and feature movies and shows from Disney, Pixar, the “Star Wars” franchise, National Geographic and Marvel. Disney also owns the majority of Hulu and the ESPN Plus sports streaming service. Disney said Tuesday that it would offer a $12.99 bundle package of the three services. Building these streaming platforms is tremendously expensive. Losses in the division that houses streaming totaled $553 million in the quarter, up from $168 million a year earlier, Disney said. The company expects streaming-related operating losses to widen to $900 million in the current quarter. Also hurting Disney: Some of the Fox businesses appear to be in worse shape than anticipated. Iger said the Fox movie studio, for instance, had results that were “well below” what Disney hoped for “when we made the acquisition.” Disney disclosed that it had taken a write-down for the Fox film “Dark Phoenix” in the quarter; that superhero movie cost an estimated $350 million to make and market and collected $252 million at the box office, roughly half of which goes to theater owners. Iger said fixing the Fox movie studio would most likely take “a good, solid year, maybe two years.” The overseas media company Star, another former Fox business, posted a loss of $60 million in the quarter because of higher sports rights costs. Disney called Star’s performance “well below expectations.” The absorption of Fox assets also cost Disney $207 million in severance-related charges. Most of Disney’s own businesses had a great quarter. Walt Disney Studios, for instance, released three runaway hits — “Avengers: Endgame,” “Aladdin” and “Toy Story 4” — and ESPN delivered increased profit as a result of higher advertising revenue and bigger fee payments from cable providers. Results were weaker than expected at Disney’s theme park business, however. Star Wars: Galaxy’s Edge, a new area at Disneyland that cost an estimated $1 billion to build, opened in late May to mostly rave reviews. Analysts expected Galaxy’s Edge, the largest expansion in Disneyland’s 64-year history, to attract beyond-capacity crowds. But the 14-acre addition, at least in its initial weeks, had “attendance that was below what we hoped it would be,” Iger said. Some people, he said, may have stayed away because they feared long lines, but he also pointed out that Disney was unveiling Galaxy’s Edge in phases, delaying the opening of one major ride until January. Jessica Reif, an analyst at Bank of America Merrill Lynch, noted that the cost of visiting Disneyland had increased considerably in recent years. “I don’t remember a time when they have raised prices this much,” she said. One-day adult admission to Disneyland during the busy summer months costs $149. Off-peak tickets cost $104. Reif added, however, that she wasn’t worried about Disneyland attendance for the year. “I wouldn’t be concerned unless there is negative attendance,” she said. Disneyland had 18.7 million visitors in 2018, up 2% from a year earlier. “We do not feel that we have a pricing issue,” Iger said. Disney is scheduled to open a nearly identical version of Galaxy’s Edge this month at Walt Disney World in Florida.

Tweets by @forbesindia
Wait, people pay for Tinder?
How to succeed in the Fourth Industrial Revolution