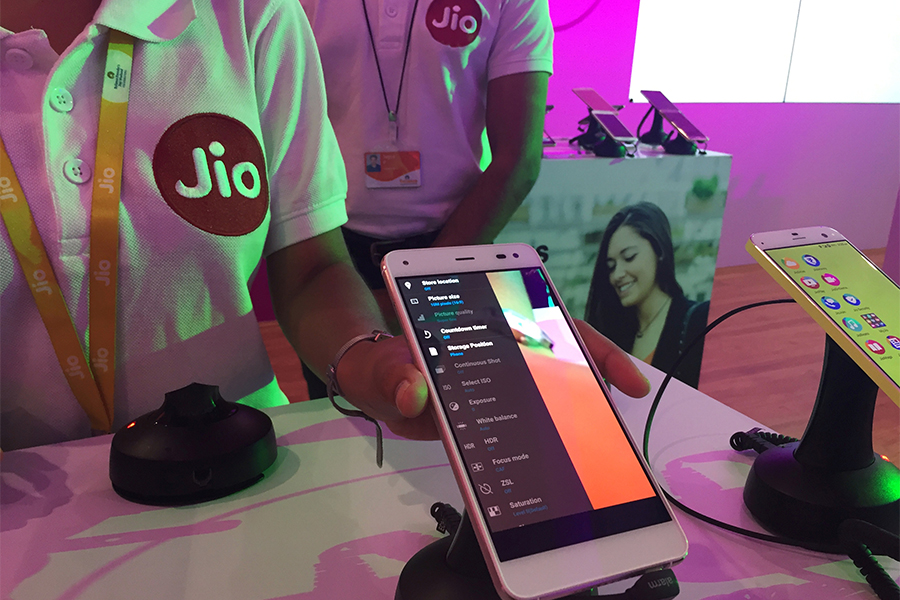 Just when it begins to appear like the market has been able to put a finger on the pulse of the full potential that Reliance Jio Infocomm (Jio) holds, new information comes to light, which magnifies the probable scope of the oil-to-yarn and retail conglomerate’s new telecom venture.

Sample this: On March 2, at the first analysts’ meet organized by Jio, an arm of Reliance Industries Ltd (RIL) led by India’s richest billionaire Mukesh Ambani, the company’s management indicated that by 2020-21 the company could potentially clock revenues to the tune of Rs1.50 lakh crore. To put things in perspective, the telco’s targeted turnover is over 50 percent of the consolidated turnover of Rs2.84 lakh crore that RIL reported in 2015-16, through its operations across verticals including oil and gas production, crude refining and marketing, petrochemicals, and retail.

The math is simple. Jio expects the share of voice revenue in the Indian telecom market to rapidly and progressively make way for earnings from data services. According to a Jio investor presentation, the data market in India is expected to be worth Rs3 lakh crore by fiscal 2021. With the technological backend and infrastructure that it has put in place over the last seven years, Jio expects to be in a position to capture at least half of this market, equal to Rs1.50 lakh crore.

Not only that. Jio’s management further stated that it expects to earn an Ebitda (earnings before interest, tax, depreciation and amortization) margin of 50 percent, implying an absolute Ebitda of Rs75,000 crore.

A detailed analysis of Jio’s gameplan reveals that, contrary to the belief that some hold that volume growth on Jio’s network will only be driven by subscribers who came on board for the free services that it is offering till March 31 and low-value subscribers, the telco expects revenues and profitability to be driven by  high value customers.

On February 21, RIL chairman Mukesh Ambani announced that Jio will start charging for its services from April 1. While many initially thought that paid Jio services (which are being offered free under promotional schemes from September 2016 till the end of the current month) will lead to the creation of a more level playing field in the competition-ridden telecom sector, the aggression with which the pricing strategy was announced led to the view that not much may change with respect to the businesses erosion that incumbent telcos have suffered since Jio’s launch.

For instance, for its first 100 million subscribers, Jio has launched a special membership plan known as Jio Prime. Any existing Jio subscriber (and those that take up a connection till March 31) will be eligible to enroll for Jio Prime by paying an annual fee of Rs99. These subscribers can then pay Rs303 per month to enjoy free voice calls and free 4G data (with a daily fair usage cap of 1GB) for another 12 months ending March 31, 2018. Additionally, Jio will also offer its full bouquet of media services, worth Rs10,000, to its subscribers free of charge till March 2018.

That’s not all. By speaking to retailers and various channel partners, brokerages have also discovered that Jio has other tariff plans on offer, each promising to deliver maximum bang for the buck. For instance, there are monthly plans of Rs149 (for 2GB data) and Rs499 (for 56 GB data with a daily 4G speed cap of 2 GB). There are also four long-validity plans that have no daily limit. These include a Rs999 plan (60-days validity for 60 GB); Rs1,999 (90 days, 125 GB); Rs4,999 (180 days, 350 GB); and Rs9,999 (360 days, 750 GB). All of these plans, except the Rs149 plan, entail a tariff, which is higher than the average revenue per user (ARPU) recorded by the telecom sector. This clearly indicates that Jio’s business model isn’t solely dependent on undercutting the market to gain market share.

“We find it positive that Jio has chosen not to start the actual revenue paying scheme from April at steeply discounted tariffs, but at around Rs311 per month (Rs303 plus the equated monthly portion of the Rs99 annual fee for Jio Prime), which is higher than the average industry ARPUs,” says a March 1 report by JP Morgan. “The flip side is how many of the current 100 million SIMs migrate into paying subscribers where even the discounted ARPU of Rs311 would imply 50 percent premium to current industry average ARPUs. What it does highlight is that Jio is focusing on high paying subscribers and not on the entire telecom subscriber base.”

Yet, it is becoming increasingly clear that with tariff plans that are higher than the industry average, yet offer maximum value by way of increased data availability, Jio will continue taking a toll on the financials of rival telecom firms.

“Assuming this plan (Rs303) appeals to only customers with total across-SIMs wireless spend of Rs200 per month or more, (it) suggests a potential ceteris paribus negative impact of around 16-17 percent on industry revenues in FY2018,” says a February 28 report by Kotak Institutional Equities. “We do not think incumbents can (or should) look at this as another promotional offering they can choose not to respond to.”

After announcing its entry into the telecom sector in June 2010 through the acquisition of Infotel Broadband Services, which won pan-India 4G broadband wireless spectrum through a government auction, it took Jio over six years to put its infrastructure, including an extensive countrywide network of optic fiber cables, in place before announcing the commencement of commercial operations. While the delay in rollout over the last few years led many analysts to seek visibility on the conglomerate’s telecom plans, the rationale behind taking time to patiently build its entire network before launching services, is now coming to the fore.

“Jio’s strategy is to build huge capacity. According to the Telecom and Regulatory Authority of India, overall data consumption in the industry stood at 155 million GB in the first quarter of 2016-17. Jio management indicated that currently about 1billion GB per month data is getting consumed on Jio and that it will have the capacity to offer about 4 billion GB data per month by end-FY17,” says a March 2 report by Motilal Oswal. “According to the management, it should be able to cater to 60 percent of estimated data demand in FY21 of 6 billion GB per month.”

The Jio management impressed upon analysts that the high number of cell sites and spectrum that it possesses, along with its relatively deeper fiber backhaul of 60 percent cell sites (versus a ratio of 20 percent for incumbent operators) and a better signal-to-interference-plus-noise ratio gave it a competitive edge over incumbent as the latter go about deepening the reach of their respective 4G services to compete with Jio. In its investor presentation, Jio also stated that re-farming 3G airwaves for 4G use, which incumbent telcos may seek to do, would be costly and challenging due to the upgrades needed to network equipment such as base transceiver stations and antennas. This, according to the company, will give it a capacity lead over rivals for a long time.

Ambani isn’t going to rest easy by simply creating one of the world’s largest telecom networks. Though an integral one, that is only one part of the gameplan. The second and equally critical component of Jio’s strategy is to sweat the assets it has created to offer a whole host of digital services to its subscribers. Some of these services were on display during the analyst meet. Apart from the content and financial services that Ambani has already extensively talked about, Jio is also working on digital platforms such as connected cars, home automation, Internet of Things and surveillance systems.

Jio’s aggressive entry into the market with its paid services, backed by a robust and future-ready backend infrastructure, may be a short-term negative for the telecom sector due to the challenges faced by other telcos. But the entry of the new challenger will also lead to long-term benefits by way of expansion of the overall telecom market (especially for data services), which other industry players can benefit from.

Post the launch of Jio, the market for data consumption in India has exploded. From an average consumption of 200 million GB per month before Jio’s launch, the Indian market is now using data to the tune of 1 billion GB per month with Jio in the picture. At the current level of consumption, India has become the world’s leading mobile data market, surpassing global leaders in this space including US and China.

Furthermore, of the Rs3 lakh crore-mobile data market that Jio foresees in India by 2020-21, the telco is targeting a 50 percent market share, implying potential for other industry players to exist. Although, the number of players left in the market to compete with Jio may be fewer with a wave of consolidation sweeping through the sector, which has seen the likes of Bharti Airtel and Telenor combining assets and operations; along with a potential merger between Vodafone and Idea; and a three-way amalgamation between the Anil Ambani-led Reliance Communications, Aircel and Sistema Shyam.