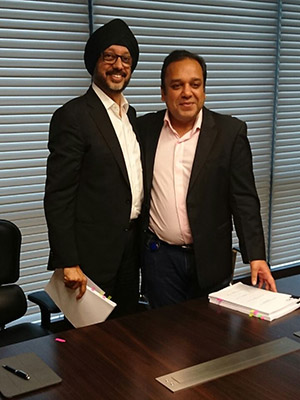 NP Singh and Punit Goenka at the signing ceremony

Sony Pictures Networks India (SPN) has entered into definitive agreements to acquire TEN Sports Network from Zee Entertainment Enterprises Limited (ZEE) for $385 million. This acquisition will give SPN a strong footing in a market dominated by 21st Century Fox-owned Star India until now.

Punit Goenka, managing director, Zee, says that this is a landmark deal for Zee and a step towards a “strategic portfolio shuffle” as they grow their general entertainment business both in the domestic and overseas markets. “While we have grown our sports business over the last 10 years through acquisition of content at competitive prices, our focus now is on transforming ourselves into an all-round media and content company, comprising five verticals, viz broadcast, digital, films, live events, and international business; and we continue to move rapidly towards our set business goals,” he says.

Andy Kaplan, president, Worldwide Networks, Sony Pictures Television, says that India has been a strong driver of Sony Pictures’ growing networks business for two decades, and sports continue to play a significant role in that growth. “The acquisition of TEN Sports, following the launch of SONY ESPN channels, will mean that our Indian networks would reach over 800 million viewers and broadcast many of the most popular and prestigious sporting events in the world,” he adds in a press statement.

Tweets by @forbes_india
For us to win, no one has to lose: Airbnb India head
Zorawar Kalra: The culinary artist