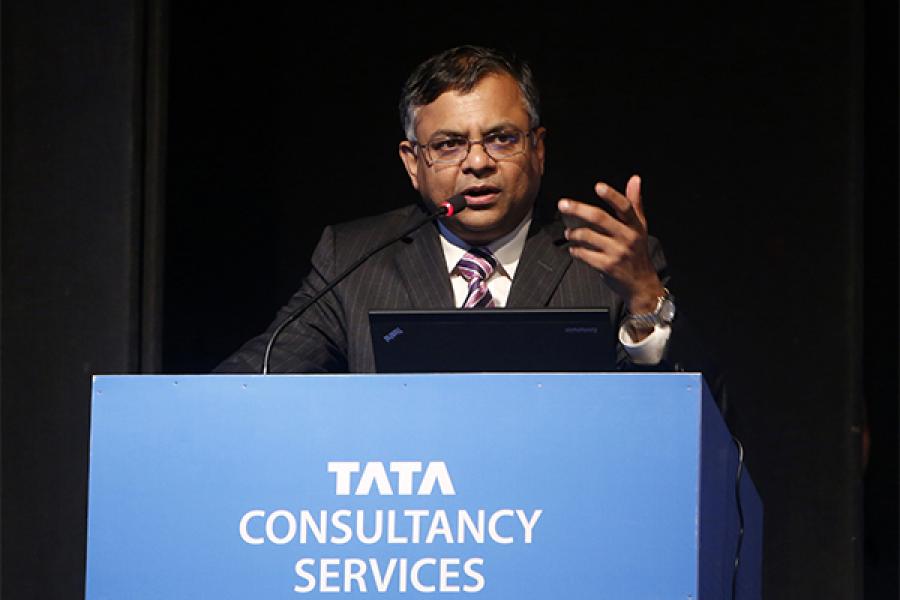 Tata Consultancy Services, India’s biggest software services company by revenues, reported fiscal second-quarter sales fell from the previous quarter, adding to concerns that the Indian IT sector is staring at bleaker prospects than at the beginning of the year.

Sales in the finance vertical, the largest contributor to TCS’s revenues, rose only 1.2 percent in constant currency terms. Sales to clients in retail fell from the previous quarter. Overall, constant-currency sales, in dollar terms, which eliminates the effect of currency exchange rate fluctuations, rose 1 percent from the previous quarter to $4,374 million. Some analysts were expecting a sequential increase of 1.5 percent. Sales rose 5.2 percent from $4,156 million for the year-earlier period.

“We’ve had an unusual quarter. A rather very subdued growth on the revenue line and an exceptional performance on margins,” CEO N Chandrasekaran said in a press conference discussing the results in Mumbai. “We’ve said that the BFSI sector is going to be soft, and it’s proving to be soft, and that has pretty much played out as we expected,” he said.

“Growing uncertainties in the environment is creating caution among customers and resulted in holdbacks in discretionary spending,” Chandrasekaran added in a press release on Thursday. Discretionary spending refers to money spent on projects that aren’t immediately essential to the day-to-day operations of TCS’s clients, but could help them grow their businesses in the medium to longer term. Spending on such projects is one indicator of overall health of a business.

The uncertainty spilled over beyond financial clients into retail, where TCS saw sales during the quarter fall from the previous quarter, hitting its overall revenues. Clients from the finance and retail verticals the two biggest contributors to TCS’s revenues. Further, a “negative surprise” in India, where there were delays of some orders, added to the muted growth in revenue, the CEO said.

Profits for the three months ended September 30 rose 8.4 percent to Rs 6,586 crore from Rs 6,073 crore for the year-earlier period, under Indian accounting standards, TCS said in the press release on Thursday after market hours. Sales rose 7.8 percent from the year earlier period to Rs 29,284 crore but was lower than the June quarter’s Rs 29,305 crore. The Mumbai-based company counts Bank of America, Citigroup and Deutsche Bank among its clients.

India’s IT services sector faces a worse-than-expected rest of the year as new services in areas such as digital technologies and artificial intelligence will not nearly be enough to boost growth that still largely relies on traditional large outsourcing contracts.

The $108 billion sector’s biggest companies have already warned of delays, cuts and cancellations among their global clients. Analysts and investors expect growth in the rest of the year to be marred by continued uncertainty due to Brexit and the US elections among large macro factors, and the rise of cloud computing on the technological side.

The three months ended September 30 “is expected to witness tepid revenue momentum despite being the seasonally strongest quarter for the industry,” Kuldeep Koul and Bhrugesh Parsawal, research analysts at brokerage ICICI Securities, wrote in a note to clients on October 3. Revenues at the top-five large-cap IT services companies that the analysts track are expected to grow by just 1.5 percent quarter on quarter (~2.3% in constant-currency terms), the analysts wrote, “which is the slowest Q2 growth in the past decade.”

Last month, TCS warned its customer outlook was “characterised by abundant caution” based on data it had with a month to go before the quarter ended. Especially among its financial clients, who account for about 40 percent of its revenues, spending had slowed, with a resultant “sequential loss of momentum” in its business, TCS said in a September 7 statement to the stock exchanges.

The scrapping of a large project at Royal Bank of Scotland will likely hit revenues at rival Infosys, and the continued lack of traction in the energy and utilities vertical plagues third-ranked Wipro’s prospects.

Infosys, which has already cut its forecast for its full-year revenues, may do so again when it announces its results on Friday, analysts expect.

“We expect the magnitude of the guidance cut to be significantly larger than the impact of just RBS and expect the company to revise its US dollar guidance from 10 percent to 11.5 percent earlier to 7.5 percent to 8.5 percent,” analysts at ICICI Securities said in their note.

That compares with the current estimates of 10-12 percent growth in exports for IT services made by National Association of Software and Services Companies, India’s biggest tech lobby, for the current fiscal year that ends March 2017. Third-ranked Wipro reports its quarterly numbers on October 21.