Technological progress has outpaced the political debate again. What will happen when the next TikTok arrives in the United States? 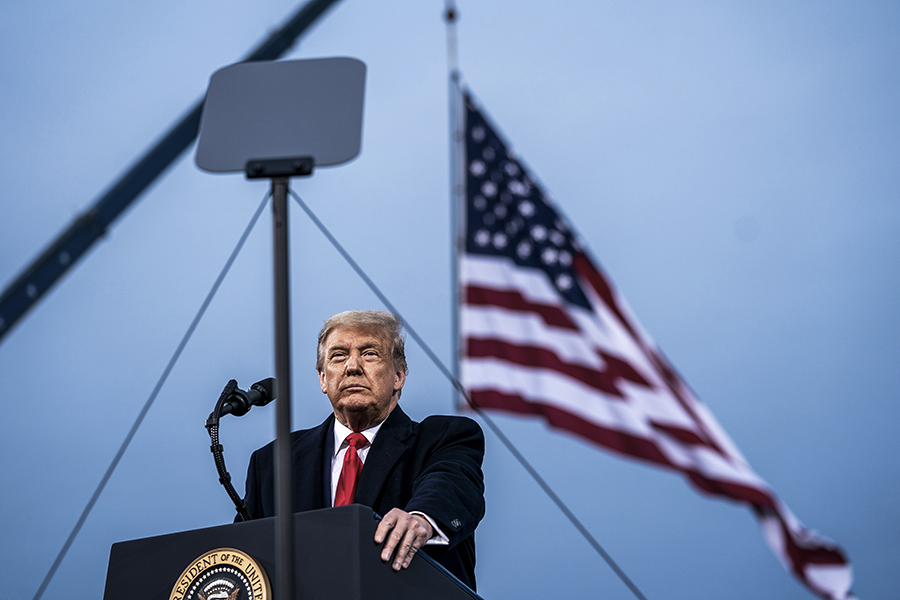 President Donald Trump holds a fly-in campaign rally at the Fayetteville Regional Airport in North Carolina, Sept. 19, 2020. In a deal announced on Saturday, which was spurred by Trump’s national security concerns over TikTok, the social media app said it would separate itself from its Chinese parent company, ByteDance, and become an independent entity called TikTok Global. (Doug Mills/The New York Times)

WASHINGTON — President Donald Trump has declared victory in his latest confrontation with China, saying that he headed off a looming national security threat by forcing the sale of the social media app sensation TikTok to a consortium of American, European and — although he does not say so — Chinese owners. But it is far from clear from the details released so far that Trump’s deal resolves the deeper TikTok security problem — which has less to do with who owns the company and more with who writes the code and algorithms. The code and algorithms are the magic sauce that Beijing now says, citing its own national security concerns, may not be exported to a foreign adversary. And the deal certainly doesn’t resolve the broader problem in the expanding technology wars between Washington and Beijing: how the U.S. government should deal with the foreign apps that are now, for the first time, becoming deeply embedded on the screens of Americans’ smartphones, and thus in the daily fabric of American digital life. TikTok illuminated the scope of the new competition. The United States wants to have it all. It seeks to reap the benefits of a global internet yet limit its citizens to made-in-America products, ensuring that the data that flows through American networks is “clean.” In fact, the Department of State has begun what it calls “the clean network initiative,” making sure that data is not tainted by adversaries, starting with China. “This is a really hard problem and bashing TikTok is not a China strategy,” Amy Zegart, a senior fellow at the Hoover Institution and Stanford’s Freeman-Spogli Institute. “China has a multiprong strategy to win the tech race,” she said. “It invests in American technology, steals intellectual property and now develops its own technology that is coming into the U.S.,” as TikTok did with remarkable success in just two years. “We don’t have to guess what their intentions,” she said. “They have written what their intentions are, and it’s called ‘Made in China 2025,’” the country’s strategy of becoming a peer competitor of the United States in all major technological arenas in the next five years. “And yet we think we can counter this by banning an app. The forest is on fire, and we are spraying a garden hose on a bush.” If American politicians seem to be behind on this one, perhaps it is because technological progress has once again outpaced the political debate. On Capitol Hill, the China problem many politicians still fume about is cheap Chinese goods, ignoring the fact that China’s labor is no longer inexpensive. Others call for crackdowns on intellectual property theft, a problem that George W. Bush tried to tackle with his Chinese counterpart in the Great Hall of the People 15 years ago, and that Barack Obama and President Xi Jinping, then new as China’s president, declared they had solved five years ago. Of course, they didn’t. China shifted its hacking operations from units of the People’s Liberation Army — some indicted by the Justice Department — to the Ministry of State Security. In recent days, the FBI has warned of broader surveillance and theft operations on American campuses, much of it aimed at coronavirus vaccines. TikTok presented an entirely new problem, one that most policymakers in the United States had not contemplated before. For the first time, a genuine Chinese app — not a knockoff of something invented in the United States or Europe — captured the hearts of American teenagers and millennials. On one level, it was harmless: TikTok is mostly jammed with one-minute dance videos. By many measures, it was a bigger parenting problem than a national security problem. Whatever it was, it clearly wasn’t on Washington’s radar the way that the expansion of China’s nuclear arsenal, or its actions in the South China Sea, dominate the China debate. Yet as Brad Smith, president of Microsoft, which competed with Oracle to buy TikTok’s operations in the United States, noted, “there is a potential threat.” To make TikTok tick, the company collects vast amounts of data on Americans’ viewing habits. And the same algorithm that picks your next dance video could, in the future, pick a political video. (There is already more than a whiff of political content on the app.) Like Oracle, Microsoft would have taken over the storage of all data on Americans, keeping it in the United States. (TikTok currently has a major data server in Virginia, but backs up data in Singapore.) But Microsoft’s bid went further: It would have owned the source code and algorithms from the first day of the acquisition, and over the course of a year moved their development entirely to the United States, with engineers vetted for “insider threats.” So far, at least, Oracle has not declared how it would handle that issue. Nor did Trump in his announcement of the deal. Until they do, it will be impossible to know if Trump has achieved his objective: preventing Chinese engineers, perhaps under the influence of the state, from manipulating the code in ways that could censor, or manipulate, what American users see. “If Oracle is providing hosting with the majority of engineering and operations staying with ByteDance, then the only effect of this deal was to swing billions of dollars of cloud revenue,” said Alex Stamos, who runs the Stanford Internet Observatory. “The details of the deal will really matter, and so far the public has not been provided with enough information to have an educated opinion.” Without that issue resolved, it is unclear how Trump could declare that the security issues are solved, much less how he could say that the new entity “will have nothing to do with China.