Why markets are not panicking about Italy (yet)

By Jack Ewing and Amie Tsang 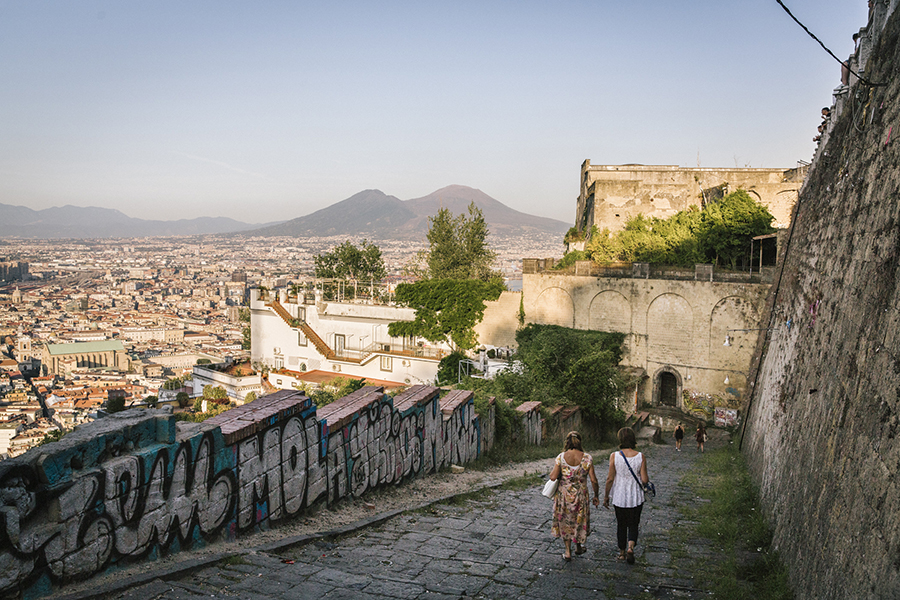 FILE -- A view of the volcano Mount Vesuvius and the surrounding city, in Naples, Italy, July 23, 2019..Uncertainty is a familiar part of Italian politics, and investors are already looking at what a new government could bring. (Gianni Cipriano/The New York Times)

A country with one of the scariest debt loads on the planet slips into political chaos. The market reaction: a shrug.

At first glance, it makes no sense that Italian bond yields edged lower after Matteo Salvini, leader of the populist, right-wing League party, provoked the collapse of the Italian government Tuesday.

Investors and economists have viewed Italy as a crisis waiting to happen because of its toxic combination of astronomical government debt, chaotic politics and dysfunctional economy. You wouldn’t think that a political meltdown would make market players more eager to lend Italy money.

But at least Wednesday, with Italy still in an uproar, they continued to bid down the interest rate on Italian bonds, albeit by only a few hundredths of a percentage point. It was sign of mild confidence that lending to the government was now less of a risky proposition.

Could the next government be more pro-business?
Investors seem to think that any government will be better than the mashup that fell apart this week, a mismatched coalition of Salvini’s League and the anti-establishment 5-Star Movement. The previous government threatened to break European Union budget rules, cozied up to President Vladimir Putin of Russia and has been unable to budge Italy’s growth rate above zero.

Some investors may be betting that the 5-Star Movement will ditch Salvini’s partisans and instead join the center-left Democratic Party. At the very least, the argument goes, such a government would be less likely to lead Italy out of the euro and back to the lira.

Other investors may be wagering on new elections, which polls show that Salvini would win. He would form a government that would be populist in its rhetoric but — so investors hope — pro-business in its policies.

That may be wishful thinking.
“Many people perceive that anything is better than the current government, even one led by a far-right leader,” said Lorenzo Codogno, former director general of the Italian Treasury and now an independent consultant. He noted, though, “I think the risks are underestimated.”

It’s also possible that investors are so inured to drama in Rome that they simply shrugged off recent events as the latest episode in Salvini’s reality show. Instead, they are focusing on the likelihood that the European Central Bank will announce new stimulus measures next month that will further push down interest rates across the board, even for Italian debt.

“This type of uncertainty and breakup of governments is not unknown to Italy,” Maria Demertzis, deputy director at Bruegel, a Brussels think tank, said with a degree of understatement. “It was an uneasy marriage to begin with; the fact that it broke up was not a surprise.”

Why should anyone outside of Italy care about Italian politics?
In a word, debt.

Italy’s government debt amounts to 134% of the country’s gross domestic product, one of the highest ratios in the world. If investors ever lose confidence in the government’s ability to make payments on the debt, the effect on global financial markets would be devastating.

“An Italian default would be a big tsunami in financial markets,” said Lucrezia Reichlin, a professor of economics at London Business School.

The debt would be less of a problem if the Italian economy were growing, but it’s not. Economic growth in the second quarter of this year was zero. The current government has aggravated the debt problem and further rattled markets by threatening to increase the deficit in violation of European Union rules.

Italian 10-year government bonds were trading at a yield of 1.33% Wednesday, down 0.035 percentage points from Tuesday. The yield is low in historical terms but is not exactly a vote of confidence in Italy. The comparable German government bond was trading Wednesday at minus 0.67%. Investors are in effect paying the German government to keep their money safe, while demanding a premium for more risky Italian debt.

Government bonds serve as benchmarks for bank lending. That means that Italian consumers and businesses have to pay more for a loan than people or firms in Germany or France, a dragging anchor on growth. With recession looming, the government can’t increase spending without alarming financial markets even further.

What are the chances of a government able to fix the economy?
Slim. None of the political scenarios seem likely to produce a more effective team, much less one that can address Italy’s deep economic problems.

The 5-Star Movement and Democratic Party have been bitter rivals, and it is hard to believe their coalition would be any less contentious than the government that just dissolved. Even relatively stable governments have recently failed to push through changes.

When Matteo Renzi, a Democrat, was prime minister several years ago, he tried to simplify government decision-making and create a better environment for entrepreneurs. But the changes inevitably threatened established interests, and the political backlash drove Renzi from power in 2016.

“Italy has lost a lot of competitiveness,” Demertzis said. “Italy has been slow to address this. They need structural reforms to address the issue of productivity, but these reforms are difficult and painful to implement in the beginning; therefore, they’re very unpopular.”

If the 5-Star and Democratic parties cannot muster a majority in Parliament during coming days, there will be new elections later this year. Polls show that Salvini would get the most votes and then form a coalition with two smaller conservative parties.

Some investors would view a Salvini government favorably, on the grounds that it might be more stable. Salvini gets support from some segments of Italian industry. Perhaps, the optimists say, his business friends would persuade him to do what needs to be done to fix the Italian economy.

Salvini is popular enough that his party might even win an outright majority in Parliament, removing the need for him to compromise with his more moderate coalition partners.

Salvini’s track record suggests that, unchained, he would revert to the anti-immigrant and anti-Brussels rhetoric that have fed his popularity in the past. Rather than addressing Italy’s underlying problems, he would try to stimulate the economy by taking on even more debt, said Nicola Nobile, lead economist at Oxford Economics.

If Salvini takes power, Nobile said, “then I think he will go on some Trump-style expansionary fiscal policy. He basically believes that if you cut taxes, then economic growth is strong enough to pay these cuts by themselves, which we know as economists is not the case.”

“Salvini is perceived as a person who can do things,” said Codogno, the former Treasury director, “but I don’t think he has a view of how to address the fundamental issues of the economy.”

Tweets by @forbesindia
Forbes Best Under a Billion 2019: The full list of companies
Hi, Alexa. How do I stop you from listening in on me?