Why foreign leagues are invested in Indian football 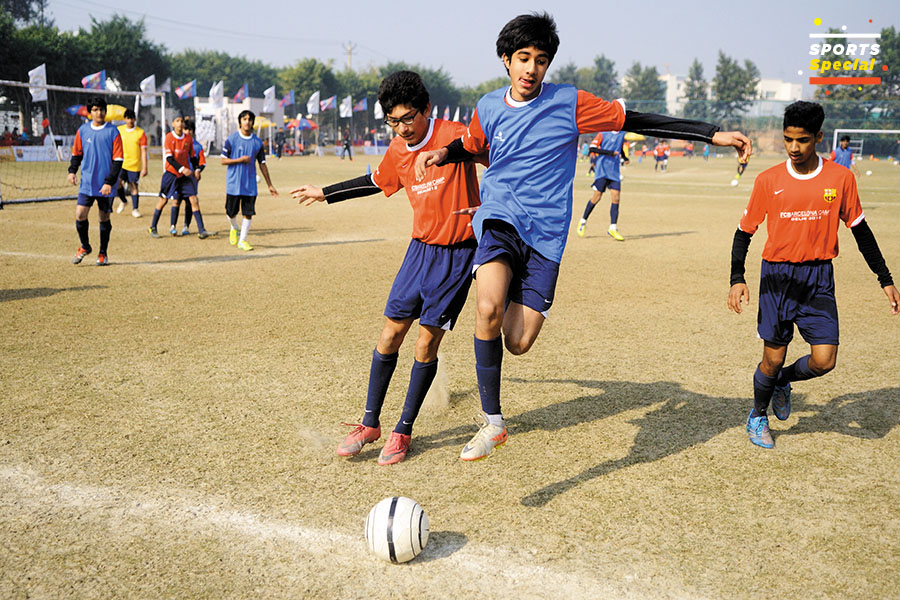 A camp by FC Barcelona at a school in Gurugram
Image: Pradeep Gaur / Mint via Getty Images

India, which was once a sleeping football giant, has woken up with a bang.

First, the 2017 Fifa U-17 World Cup broke previous attendance records with over 1.3 million spectators. The global media attention garnered by the event helped develop sporting infrastructure, upskill personnel and transfer knowledge to government organisations and businesses to stage major footballing events. As a result, India has now come a full circle by winning the hosting rights of the Fifa U-17 Women’s World Cup in 2020.

Second, leading the change in India as a developing football market since 2013 is the Indian Super League (ISL), which, with 155 million followers in the country, is the fifth biggest football league in the world in terms of average spectator attendance. It is behind only the Bundesliga (Germany), the Premier League (PL, the United Kingdom), La Liga (Spain) and Serie A (Italy), and ahead of the Major League Soccer (MLS, the United States of America), Ligue 1 (France) and Liga MX (Mexico).

This ever-growing popularity in India has attracted the interest of global football leagues and clubs. La Liga have made India their base since 2016 and have opened La Liga Football Schools, an initiative with which they claim to have reached 10,000 kids through the 35 football schools in 14 cities across eight states.

“Our strategy for India is geared towards a long-term approach; you cannot rush when working in a country as big and complex as India. We cannot forget either that football is not, nor is expected to be, the first sport here,” says Jose Antonio Cachaza, managing director for La Liga in India. He explains their efforts are now concentrated on increasing fan base, developing a brand presence and improving commercial appeal. “So far, the results have been good. Before launching our India strategy, we had around 300,000 followers on Facebook in India. Today, less than three years later, they top 3.5 million, which makes La Liga the most-followed international football league in India,” says Cachaza.

Market research firm GFK recently conducted a study for La Liga in China, India and Indonesia, and found that football is the second favourite sport in India after cricket. Part of this could be attributed to the rising internet and mobile penetration in India. India’s internet users are expected to register double digit growth to reach 627 million in 2019, driven by rapid expansion in rural areas, says market research agency Kantar IMRB. India is also the largest market for Facebook in the world—with 250 million users—and with Sony Pictures Networks India (SPN) partnering with Facebook to telecast the La Liga on television in India, it will further the league’s growth plans in India.

Cachaza believes that India is working hard at three key levels to shape its football ecosystem: Grassroots development, professional leagues and national team. “In all of them, the positive development is evident. But football needs time. I cannot say when, but I am convinced I’ll see, sooner than later, a footballer coming from India’s grassroots starting for a La Liga team, and India playing in a World Cup.”

Further, foreign clubs are collaborating with local entities like ISL and the I-League clubs to show their commitment towards Indian football. Varun Tripuraneni, former CEO of ISL team Kerala Blasters and now co-founder of sports management company WorldSports1, says: “With Indian clubs having existing foundations pertaining to scouting, junior teams and competitions, and a fan base, the focus of a foreign club is now shifting towards an amalgamation of both technical and brand promotion. For instance, the partnership between Atletico Madrid and Tata Football Academy (TFA), as part of which the latter was renamed as Tata Atletico Football Academia.” 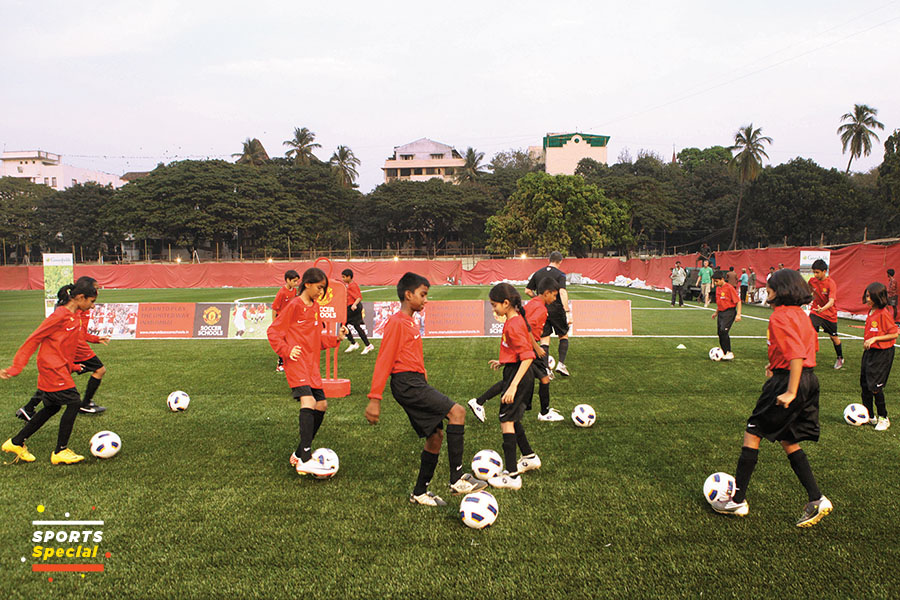 He explains that as part of the deal, Atletico provides technical support to the TFA academy in Jamshedpur, with experts from La Liga visiting the facility from time to time along with the exchange of knowledge over aspects such as player recruitments and scouting, video analysis, physiotherapy, facility management and periodic assessments.

As football clubs prioritise the grassroots, state authorities are eager to do their bit to streamline the process. Vishal K Dev, secretary, department of sports and youth services, government of Odisha, agrees that the growing interest of foreign football clubs in the Indian ecosystem is due to the increasing size and maturity of the market. “Our department, too, since 2018, has an ongoing discussion with Chelsea FC regarding a residential academy in Bhubaneswar, to bring the club’s training philosophy and methodology,” he says. “We are also open to such conversations with other top clubs. Borussia Dortmund FC has made a similar approach, and we should soon be meeting them once Bhubaneswar fully recovers from the damages of the cyclone.”

To give another example, FC Barcelona runs Barça Academies with partners in Delhi, Mumbai and Bangalore. The Spanish club is particularly targeting youth development as part of which they held their first edition of the Barça Academy Cup Asia Pacific in January. The tournament, organised by the Barça Academy in Delhi at the Heritage Xperiential School, saw more than 500 players from 13 academies across Asia,  with children from seven to 15 years in attendance.

Jordi Camps, FC Barcelona’s APAC managing director, says: “In general… people in India like to watch us play, so there’s a strong brand affinity here. Commercially, however, we have to do a better job of explaining what FC Barcelona is.” Camps adds that their outreach involves multiple platforms like schools, international organisations, governments, non-profits and social media. “We want to partner with local businesses and brands that go beyond the traditional sponsorship model.”

Camps explains that training at their academies is driven by the idea that any person of any stature or physique can succeed with football by playing the way. “We give Indian children a chance to try training methodologies followed by youth academies in Barcelona. It is a style based on positional play, with the ball at the centre of everything,” he says. “Through the participation of our coaches, we make these children experience what is as close as possible to the real thing at Barça Escola in Barcelona. Following that, the process is practice, practice, practice.”

The club is also appealing to the fans of India’s most popular sport— cricket. In the last six months alone, it hosted both Sourav Ganguly and Rahul Dravid at Camp Nou to watch a match. Dravid witnessed Barcelona’s 2-0 victory over Atletico Madrid and was presented with the club’s home jersey by club president Josep Maria Bartomeu. Similarly, Mahendra Singh Dhoni, a Manchester United fan, has visited Old Trafford, while KL Rahul was invited by Arsenal FC for a match.

Clubs have covered India’s next big obsession too—cinema.  Actor Ranbir Kapoor, a Barça fan, was invited over by FC Barcelona in 2011 where he met the entire team. Last year on his birthday, he received a jersey exclusively signed by Lionel Messi. Meanwhile, the EPL has formed an official partnership with actor Ranveer Singh, who promotes the league among his fans in India.

Engaging fans via localised content and engagement on social media has also become one of the priorities for foreign clubs. Manchester City recently invited India’s top YouTuber Bhuvan Bam, with 13 million followers, for a derby match and did a campaign around it.

Manchester United has also unveiled a series of India-oriented videos specifically aimed at the 35 million fans across the subcontinent. United unveiled one video every week from December 2018 to January 2019, featuring documentary-style stories from its community of fans in India.

Phil Lynch, CEO of media, Manchester United, says: “We want to celebrate that devotion [of fans in India] through engaging content, which tells some remarkable stories of dedication and shows the extraordinary lengths people go to in order to support the club they love.”

He says the growth of football has been well-documented in the country and that India has been among the top five with regards to fans viewing content on their platforms. “Since launching our first official app and YouTube channel this year, we wanted to delve a little further and connect with our India fans on a more ‘local’ level. This will help us do that”.