Jeff Immelt, CEO and Chairman of General Electric: Pushing Change Can Be Unpopular 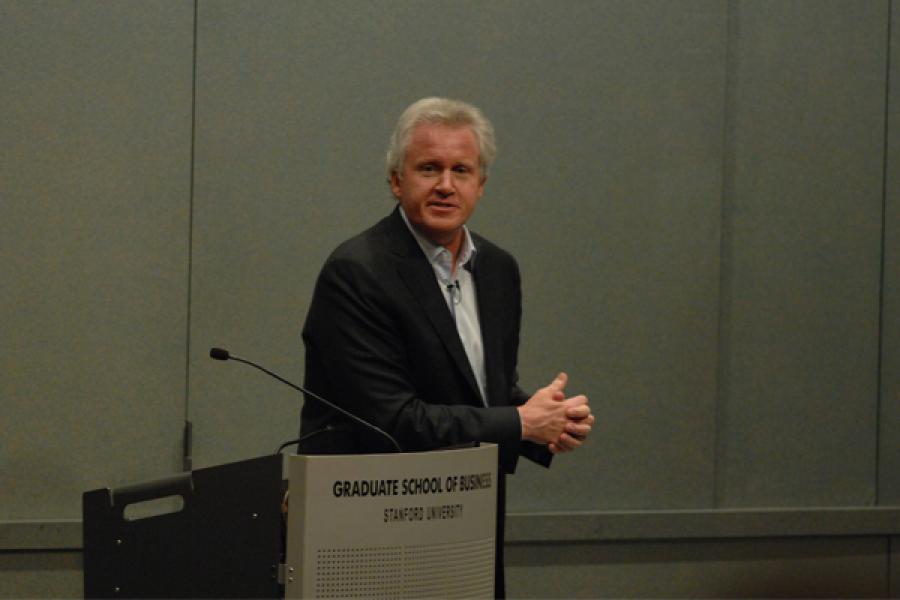 STANFORD GRADUATE SCHOOL OF BUSINESS — He says he's never been camping or planted flowers and stopped mowing his own lawn long ago. But a self-proclaimed lack of "environmental credibility" hasn't stopped General Electric Chairman and CEO Jeff Immelt from striving to make his global company a power player in renewable energy, health care, and other important fields.

Immelt detailed the business changes he's seen, and revealed personal leadership challenges he has faced during nearly three decades at GE in a View from the Top speech at the Stanford Graduate School of Business on May 24.

During that hour-long conversation with a standing-room only crowd of MBA students, he covered a string of serious topics, including how today's newest business leaders must gird themselves for an increasingly turbulent business world, and how pushing for change rarely makes you popular with investors or employees. But he peppered his talk with genial humor to get those points across.

Take the case for how business is so much more globally interconnected today. "There really hasn't been a global business person who talked about Greece for 2,500 years," he quipped about the nation now mired in a financial collapse that could affect banks in other European countries. "The world your managers are dealing with is just more volatile than it used to be. You've got to find a way to buffer your investors and your employees from these wild swings."

And, to be a leader, he said, it helps "if you actually like people. I worked for a lot of bosses who didn't. But the last one actually did," he said, referring to a legendary former GE CEO Jack Welch.

Immelt joined GE in 1982, the same year he earned an MBA from Harvard Business School. After starting off in the company's plastics business, he went to handle sales and marketing and eventually oversee half of the firm's U.S. sales force.

But it was a phone call from Welch that solidified Immelt's professional destiny.

Welch first detailed big trouble in the company's appliance business and then said he needed "a young talent, an outside set of eyes … somebody who's got the passion." Immelt accepted a three-year post in that division, a job that he called "brutal" and "tough." But it was also his break to prove himself able to successfully handle a huge role. Looking back, said Immelt, "I wouldn't be CEO today if he hadn't reached out and given me a high-risk, high-reward job."

Immelt touts what he called "reverse innovation," or finding profitable markets in unusual places. For example, the company developed a lower-cost Magnetic Resonance Imaging machine to sell in China, but anticipates interest among rural hospitals in the United States that might not have been able to afford the technology before.

It's all part of GE's initiatives in clean energy and health care, begun during the past few years says Immelt to show "how … we make money for investors while solving great problems at the same time."

The effort has seen its challenges, including some dissatisfaction about how long it can take for a new product to progress from an idea to profitability, a process that can take years. "Our investors don't always like it," said Immelt. "Our employees sometimes get bored."

Once they land in corporate jobs, he encouraged students to broaden their perspectives by seeking out the opinions of contrarians. "Have people who are your worse critics, and let them inside where you are," Immelt said.

It's advice he follows himself. As an advisor to President Barack Obama's Economic Recovery Advisory Board, he's part of the independent group formed to advise the president on programs to help jump-start the economy. "I'm a Republican, but the president wanted to reach out and have different voices," Immelt said. "When I go and serve the president, my role is to say, 'Here's what I'd do if I were you.' To be a good friend in business, you better be able to see things with the other person’s point of view."

Immelt's speech marked the final View from the Top event for the GSB's academic year and was dedicated to Roanak Desai, a second-year MBA student who died this spring after a short illness.

Although a schedule conflict meant he could not attend Immelt's talk, GSB Dean Garth Saloner, in a recorded message played at the event, described Desai as the "heart and soul" of the student leadership team in charge of the speaker series, which brings top business leaders to campus to talk about leadership. The final presentation each year will honor Desai's "positive spirit, warm humor, generosity, leadership, and intellectual curiosity that embodied much of what we all love about the GSB," Saloner said.

Tweets by @forbes_india
A Passion For Education
Dilip Chenoy: We Have Created A Brand India