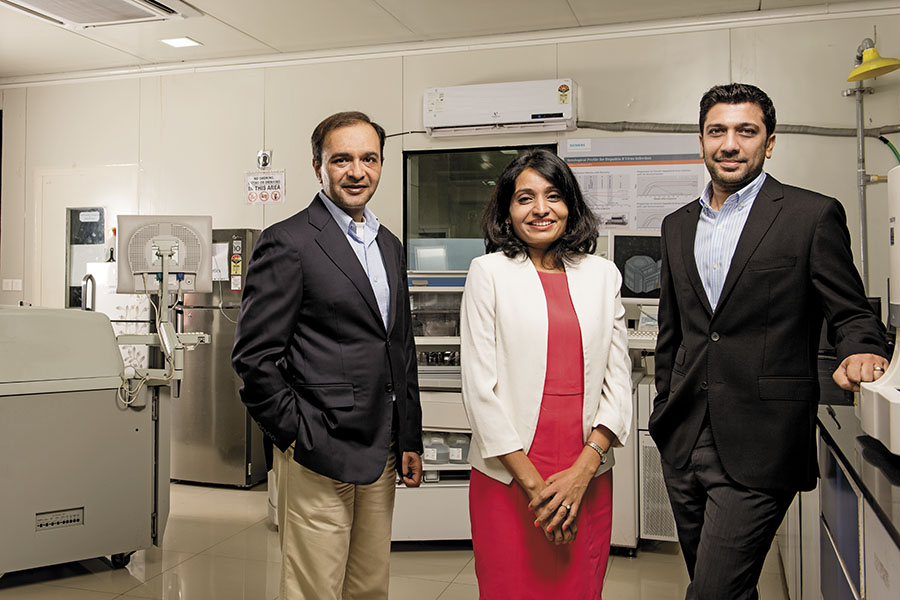 In the popular American television medical drama House, the protagonist Dr Gregory House leads a team of diagnosticians, using logic and deductive reasoning to crack medical mysteries even as his team confirms his diagnoses through elaborate medical tests. Now, the infrastructure at the fictional Princeton-Plainsboro Teaching Hospital in New Jersey, where House practises, may support advanced diagnostics, but that’s still not the case in most hospitals in India. But a trio of former investment bankers-turned-entrepreneurs hopes to change this through their company, iGenetic Diagnostics.

iGenetic was founded in 2013 (though it launched operations only in 2015) by Arunima Patel (39), a former executive with private equity firm Actis, along with former Actis colleagues Siddharth Patodia (38) and Homer Paneri (41), who also invested in the company. iGenetic specialises in molecular diagnostics, which applies molecular biology to medical testing to provide quicker and more accurate results.

Patel is the managing director and focuses on organic growth; Paneri interfaces with pharmaceutical companies that can potentially use iGenetic’s services for drug research; and Patodia is in charge of mergers and acquisitions.

The company started with a seed capital of ₹10 crore and raised ₹9 crore from angel investors in 2015. It got its biggest round of funding in February when a health care-specific private equity fund constituted jointly by CDC Group and the Manipal Education and Medical Group (MEMG) invested around ₹130 crore with the option of investing more.

iGenetic’s services are focussed across three verticals—infections, infertility and oncology. Across these segments, the company offers specialised diagnostic facilities not easily available in other pathology labs.

They have also filed for patents for some of the tests they conduct, such as those for early detection of septicemia and tuberculosis. “We are also planning to file for a patent for an antibiotic drug resistance test we do,” says Patodia. Septicemia can be potentially fatal, and diagnosing it within 24 hours is a game changer (usually, the diagnosis can take up to three days).

Other work includes next generation sequencing to help doctors personalise medicine for cancer patients and genetic diagnosis and screening to assess if an expecting mother’s child is at the risk of any serious genetic disease.

“While I was at Actis, I looked at the diagnostics space very closely. All three of us were in the health care space at some point,” says Patel, an electronics and communication engineer who did her MBA from the Indian Institute of Management, Ahmedabad. “What I realised is that there are some established players in this space that command very high valuation and then there was a sudden cliff with no one else to invest behind. That meant there is a massive opportunity in this space to become a scale player.”

Patel tied up with two scientists, Dr Archana Krishnan and Dr Sanjay Sonar, who were doing interesting work in the molecular diagnostics space and had developed some niche test protocols. Patel brought these scientists on board as equity partners and consultants to kick-start her business.

In fact, at present, routine tests comprise a greater portion of iGenetic’s turnover (around 80 percent) as the market for molecular diagnostics in the country is nascent, and specialised investigations need to be accompanied by routine tests as well.

The market for medical diagnostic services in India is estimated to be around ₹30,000 crore (growing at a compound annual growth rate of 27.5 percent) and currently high-end services constitute only 9 percent of that.

That such high-end diagnostic services comprise only a small share of the market as well as the company’s revenue begs the question as to why iGenetic got into the space. Paneri, a chemical engineer from the University of California, Berkeley, who holds an MBA from the London Business School, has a simple answer to that: “It is the future. Whoever builds the market now, builds a name for themselves, driven by relationships with institutes and doctors.” iGenetic’s strategy, therefore, involves engaging with doctors and hospitals through seminars, workshops and research papers.

It isn’t as if other diagnostic chains don’t offer molecular diagnostic services. But according to iGenetic, its USP is it offers one of the widest ranges of test menus.

The difference, adds Patel, is in its protocols, as well as its dedicated focus on molecular diagnostic services.

“We have a separate marketing team that markets these high-end services and doesn’t get to market routine tests at all,” says Patel, “whereas a marketing executive of another diagnostics chain will market a whole list of tests, since volumes come from the more routine tests.”

The company, which has signed over 100 memoranda of understanding with leading hospital chains in the country including Apollo, Rainbow, KIMS, Jupiter and SL Raheja, over the next three years expects the share of its revenues from specialised services to increase to 40 percent. It also plans to establish a larger presence in other cities including Chennai and Kolkata and some cities in Kerala, Chhattisgarh and Maharashtra.

Thanks to the funding it received, iGenetic is well-placed to execute its growth plans. Ranjan Pai, chairman of MEMG, says it is “rare to see young and experienced entrepreneurs in the health care space” who know what investors are looking for. “iGenetic is not just another run-of-the-mill path lab. It has a unique and scalable business model where it focuses on life-saving, complex medical investigations.”

iGenetic and MEMG are also collaborating on research and looking at developing a joint diagnostic product in the space of genomics. Pai states that his organisation and CDC may look to take iGenetic’s business model and intellectual property to other underserved markets such as Africa.
A large part of the funds raised from CDC-MEMG will be used to acquire pathology labs across the country.

Patodia, who holds an MBA from Harvard Business School, says the acquisitions are mostly targeted at gaining geographical footprint and relationship with doctors.

If iGenetic is successful in scaling up cutting-edge medical diagnostic technology, it will mean not just timely diagnosis of diseases but also affordable costs for such services. “Some of our tests will get cheaper as the volume of business builds up, as well as with associated input costs coming down,” says Patodia.