He took the slow and steady route in helping people self-file taxes. In seven years, ClearTax has grown both in scale and scope 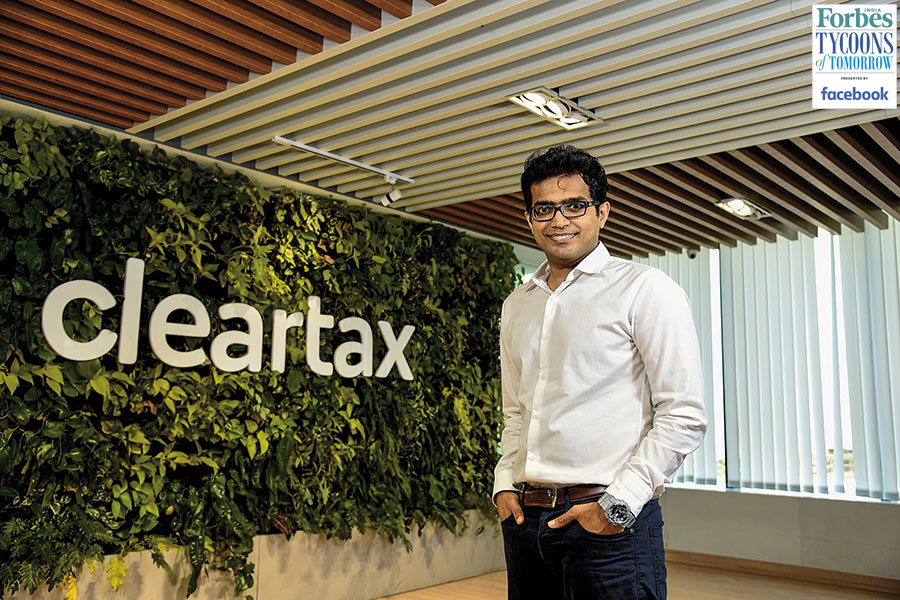 Archit Gupta, founder and CEO, ClearTax; Image: Hemant Mishra for Forbes India
Ten minutes was what Archit Gupta thought he had. Six minutes was what he got. At the end of that meeting in the summer of 2014, at Y Combinator’s office in Mountain View, California, an otherwise sanguine and stoic Gupta was somewhat baffled.

Because for about an hour before his turn, Gupta had seen half a dozen potential candidates consume their quota of 10 minutes before Paul Graham, Trevor Blackwell and Robert Morris, co-founders of the Silicon Valley startup accelerator. For some, the interview even stretched a little beyond the stipulated time.

Having been ejected out of the chamber in half the time, Gupta was almost convinced that his startup ClearTax—the firm had enabled about 1 lakh income tax returns (ITR) filings the year before—had not made the cut. After all, a stint at Y Combinator, which has been the breeding ground for Airbnb, Dropbox, Stripe, Quora, Instacart, Zenefits, Reddit and Coinbase, would have done a world of good for his fledgling venture.

But dejection gave way to euphoria when Graham called later in the day to say that ClearTax had been shortlisted to become a part of Y Combinator’s batch of 2014. For Gupta, Ankit Solanki and Srivatsan Chari, the other co-founders of ClearTax who had accompanied Gupta to the interview, it was a long night at one of the local Irish pubs.

ClearTax was the first Indian startup to be selected by the accelerator; it was also the first homegrown firm to be backed by AngelList Founder Naval Ravikant, PayPal Co-founder Max Levchin and the Founders Fund, a venture capital fund floated by another PayPal co-founder, Peter Thiel.

“Our product was imagined differently from anything available in India. We made the process extremely simple. When you come to a platform, you should think it is hospitable, that it is treating you well,” says Gupta, 33.

“For instance, if you don’t know something, we will prompt you on how to find it and you can come back to it later. The intention was to make it the easiest platform. We don’t say that we will do it the fastest. We don’t want to save you time. We want to make self-filing possible,” he adds.

The ClearTax of today looks very different from its nascent version four years ago, both in terms of scale and scope. It operates three business verticals: A consumer-facing platform that enables online filing of ITR, it sells accounting softwares, including those dedicated to the goods and services tax (GST) for businesses and chartered accountants (CAs), and a business advisory service powered by a battery of in-house CAs that handles everything from incorporation of a company to compliance.

ClearTax is on course to facilitate about 4 million tax filings in the current fiscal and incorporates 200-odd companies a month, claims Gupta. About 5 percent of its users pay for the assisted filing service. A bulk of its projected $10 million revenue for fiscal 2018-19 is, however, going to come from its offerings to businesses.

“In GST, we have lakhs of businesses filing with us, including some big companies such as Epson, Puma, Lenskart and DLF. Here, we charge a subscription fee annually,” says Gupta.

The firm has received about $15.5 million from investors such as Saif Partners and Sequoia Capital.

Early investors from Silicon Valley, who chose to back the firm despite its seasonal offering—tax filing—stand vindicated by the firm’s ability to diversify and seize opportunities. Similar businesses have flourished in the US, for instance, software firm Intuit’s consumer tax filing application, Turbo Tax, from the 1990s; according to estimates, its annual revenue stands at more than a billion dollars.

PayPal Co-founder Levchin, in an email, writes, “I have been very impressed with Archit’s thoughtful scaling of his business through multiple offerings, and value propositions in the market [which is] experiencing so much secular change and growth.”

It all began in the sweltering Delhi summer of 2010. Gupta, then an engineer at Data Domain in the US, was visiting his parents when a conversation with his father, a CA by profession, on the complexities of the government’s recently introduced online tax filing portal got him thinking.

Gupta learnt from his father that not only an average tax payer, but also professionals like him struggled to master the portal.

“The government platform had an Excel-based tool. You had to download that thing and be very sure of what you were filling. Then you had to generate an XML file, which had to be uploaded manually,” says Gupta.

He went back to his job and spent the next few months trying to gauge the feasibility of building a self-serving platform. Initial research showed that not many Indians filed tax returns, largely because of ignorance about the ramifications of failing to do so and the tedious process involved.

Highlighting this point are numbers from the Income Tax Department, which estimated 4.36 crore tax assesses in fiscal 2011-12; this was 3 to 4 percent of India’s total population. Gupta was convinced of the opportunity.

In January 2011, he bid adieu to the proverbial good life to take on incumbent startups such as Taxmantra, Taxguru, TaxSpanner and Taxsmile and large corporates such as H&R Block in India.
The first couple of years were a tale of toil and rigour.

With help from a bunch of interns, Gupta had the first version of ClearTax ready by July. In its inaugural year, ClearTax facilitated about 1,000 filings. He met Solanki and Chari, who ran a fledgling app development company called nth loop in Mumbai, at a hackathon later that year and they immediately hit it off. Solanki and Chari joined ClearTax in early 2012; Solanki is now chief technology officer, while Chari is head of products.

Gupta now had a team, but life wasn’t getting any easier. The company was bootstrapped and the trio cut costs to make ends meet. “We had to think so much about money. It never got to us. It was good that we started young. It was a very sincere struggle,” recollects Gupta of their beginnings.
Early conversations with a few investors didn’t go well either. Nobody was convinced that the business could be monetised. The only silver lining was that every year, its user base surged despite frugal marketing spends.

“Frankly, consumers were coming organically. Archit’s cost of acquisition [in June, 2016] was 10 cents to a dollar and it probably remains the same now. This implied that ClearTax had a very strong customer base because of the brand name and the product market fit,” says Mridul Arora, managing director at Saif Partners.

While users continue to grow at a fast clip, ClearTax has several big challenges to negotiate. One, a significant majority of its users do not opt for the assisted filing service, hence do not pay. The company hopes to amass a vast user base, earn their trust and sell other financial products over a period of time, the way Paytm and PhonePe do.

ClearTax has already taken a step in this direction, with the launch of a mutual funds advisory for consumers. But unlike payments apps, which are used by consumers almost every day, ClearTax is used largely during tax-filing seasons in the year.

Besides, if all companies offer the same set of products, acting as distribution channels, it will eventually boil down to user base and frequency of usage.

“It is a journey. Obviously, it is not as easy as platforms where consumers come every day,” says Arora.
“Besides, ClearTax has an external dependency on what the government does with GST. If the tax gets implemented the way it is envisioned, we see great potential. But the journey can get tough if these things keep getting delayed,” says Arora.

“The urgency of the need of a software is dependent on how strongly and how soon GST is implemented in its full avatar. Where consumers are concerned, the challenge is to ensure they view us as a destination for buying other financial services. It is both a product and a marketing challenge,” he adds.
Besides, a majority of the enterprise clients served by ClearTax currently are in the first year of using the firm’s software, which implies that their agreements haven’t come up for renewal yet. That will be a moment of truth for ClearTax.

A renewal, says a venture capital executive declining to be named, will be a testament to the quality of the firm’s offerings, while scrapping of the contract, an indictment. Here, ClearTax faces stiff competition from Bengaluru-based Tally Solutions, among other players offering similar products and services.
Gupta is mindful of the challenges. A lot of sweat and blood have gone into stitching together a customer base, which he can ill afford to squander. Gupta has a Godfather-like solution: “The software has to be so good that they can’t refuse.”