How Many Firsts Does it Take to Become Second?

The world’s fastest growing mobile telephony market, India, has many firsts to its credit. Some of them, ironically, appear to be seconds.

For instance in October 2008 Delhi supposedly became the first Indian city with more than 100 percent mobile penetration. There were slightly over 19 million-plus mobile connections in the city as reported by TRAI for a population of roughly 17 million. This put the city in the elite company of developed nations like Luxembourg, Ireland, Norway, Sweden and Hong Kong – all regions with more than 100 percent mobile penetration. 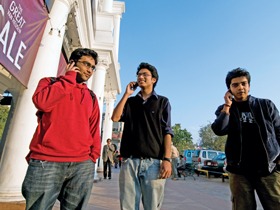 Image: Amit Verma
112 mobile connections for every 100 Delhiites, that is what the numbers claim
COAI, the representative organization for all the GSM mobile operators even had an explanation for this miraculous achievement. “Delhiites love to live well, enjoy life and spend more compared to any other city in India. It’s therefore no surprise that the city’s mobile penetration is more than 100 percent,” said COAI director general T.V Ramachandran to the Economic Times in an interview.
Six months later it turns out Chennai became India’s first city with more than 100 percent mobile penetration. According to a COAI study Chennai had 8.93 million connections for a population of 8.1 million by February 2009. Once again COAI had an explanation for the miraculous achievement. “Chennai had started as a very conservative city, with consumers reluctant to have a mobile. But it has changed dramatically in the last few years, which is reflected in the fact that there are a lot of people who have more than one mobile phone,” said T.V Ramachandran in an interview with Business Standard.
This means two out of the three Indian cities that are also independent telecom circles – Delhi, Mumbai and Chennai – have achieved the distinction of being the “first Indian city with over 100 percent mobile penetration.”
So before COAI declares the lone remaining city, Mumbai, as India’s first city with over 100 percent mobile penetration, let’s try and understand the numbers.
The key concept, says Gartner analyst Madhusudan Gupta, is the difference between the term “subscribers” and “subscriptions”. Subscribers are a subset of subscriptions and in most big cities each subscriber often carries multiple subscriptions(SIM cards). Additionally many subscriptions are increasingly being registered by small and medium businesses, and are therefore not associated to a person at all. Gupta estimates that 10 percent of all mobile connections in India might be instances of one phone with multiple SIM cards.
‘Churn’ (a subscriber leaving one operator or number for another) further complicates things. 35 to 50 percent of prepaid connections (which form 93 percent of all mobile connections in India) drop dead every year as churn. Tracking that isn’t easy. The ‘validity’ of a connection was one-way operators kept track of those leaving, but that concept is now vague. Due to the rapid evolution of lifetime offers, each operator is saddled with lifetime subscribers bound by different contracts. Some are required to recharge once in six months to stay active while others get by simply by getting an incoming call every few months.
Idea Cellular’s Managing Director Sanjeev Aga admitted in an investor call last year that India’s total mobile subscriber base might be “slightly overstated”. Reliance Communications’ March 2007 drive to weed out invalid subscribers from its base offers yet another figure - 5.6 million disconnected! An industry expert, who did not want to be quoted, estimated the number of dead connections among mobile operators’ subscriber numbers at between 5 and 15 percent.
To top it all, population statistics for leading Indian cities are often outdated or extrapolated inaccurately. For instance the last official census in 2001 placed Delhi’s population at 13.8 million. But the Delhi mobile telecom circle, which covers the NCR region, includes neighbouring suburbs like Noida, Gurgaon, Faridabad and Ghaziabad as well. This pushes up its estimated population closer to 22 million.
But pedantic digressions such as this do not take away from the fact that the growth in Indian mobile telephony is truly secular and impressive. COAI’s Ramachandran says the real growth is yet to come, given that mobile operators had only touched 43 percent of India’s geographical area by December 2008. COAI’s projected target for mobile connections in India by 2012 – 900 million.
“Some people say that at 73 percent penetration, 900 million is too high. I say look at the 27 percent that would still be left with a mobile phone,” says Ramachandran.

Tweets by @forbesindia
Leaprachauns love us
The Bootleg Baron