Kayum Dhanani's Barbeque Nation has grown from a tier 2 city restaurant to a tier 1 chain. And it is scaling fast 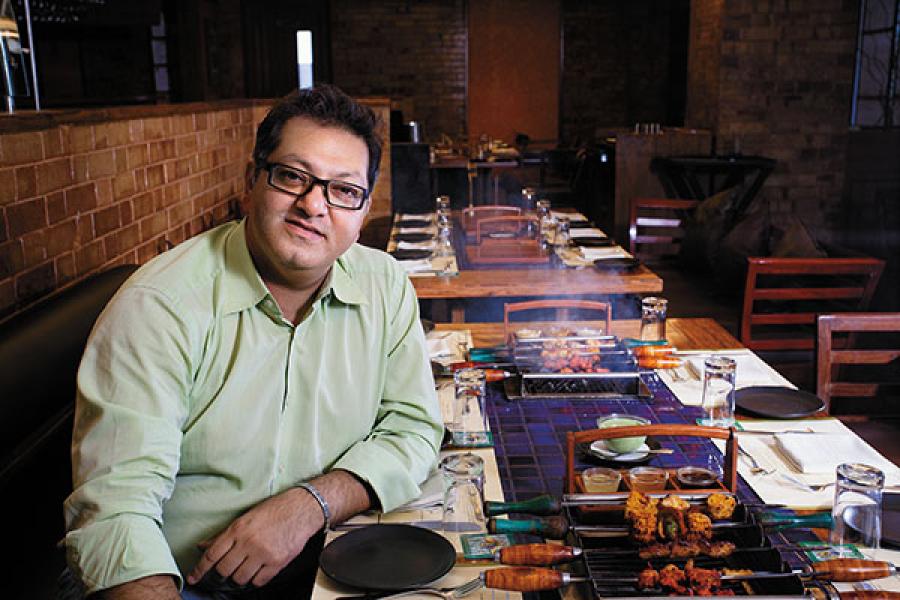 In Indore, it can get quite chilly in November. The temperature by the poolside at Sayaji Hotel was hovering around 7ºC, and restaurant manager Prosenjit Choudhury was getting complaints that kebabs served to the guests were going cold.

One evening at home, Choudhury saw a television programme about nomads facing a similar problem while camping on riverbanks. They erected a grill using stacked armour, and roasted meat on it.

Choudhury began serving kebabs, which were 90 percent cooked, on mini-grills at the tables. It was a hit.

After a successful stint in Sayaji Hotel’s banquets division—he had started with parent company Sayaji Hotels as a management trainee in 1995—Choudhury got the go-ahead from Sajid Dhanani, then MD of Sayaji Hotels, to enter food retail. As CEO of Barbeque Nation, Choudhury brought the idea from Indore to Mumbai in 2006, with the city’s first Barbeque Nation at Pali Hill, in Bandra.

Between 2006 and 2008, Barbeque Nation grew from a single outlet to 13. Today, it has 35 outlets, 18 of them opening in the last year alone. With a revenue of Rs 200 crore last year (it is expected to touch Rs 350 crore this fiscal), the chain brings in roughly Rs 9 crore per store, one of the highest for restaurant chains in India. Profit margins are 19 percent, which, for a buffet service serving unlimited meat and seafood, is remarkable.

The chain—it operates on economies of scale, which is difficult to replicate—has found a way to scale and replicate standards across 14 cities by offering customers an ‘independent’ dining experience: They pay a flat price (between Rs 650 and Rs 800 per head, depending on location and time), get a choice of five vegetarian and five non-vegetarian starters that they can season and cook on the grill at their table, move to the main course buffet, and eat as much as they want.

At the back end, purchases are meticulously planned, while at the front end the service is homely and the atmosphere informal. The chain expects to serve 55 lakh guests in 2013-14.

The Dhanani family owns Sayaji Hotels. After visionary MD Sajid Dhanani passed away in November 2012, brother Kayum took over. “The enterprise he created wasn’t so easy to understand initially, but now I’m discovering my brother through his work,” says Kayum, who recently secured Rs 110 crore in PE funds from CX Partners to help fund further expansion. He plans to use the money to strengthen the existing centralised kitchen system, invest in marketing, and add 34 new outlets by the end of 2016. He has also moved the corporate office to Bangalore for better access to a talent pool.

Setting up shop
Starting in Mumbai was a challenge for a little known brand from Madhya Pradesh. The owner of the Pali Hill outlet premises had had trouble with tenants and was cautious about letting it out. Choudhury had to pay advances on rent and building material to convince all parties concerned that he was there for the long haul. Luckily for him, the store generated a steady income from the first day itself. “I wanted to see if the hoopla around the live-grill would wear off, but after six months, we had 50 percent return customers,” he says. “Two rivals copied the idea but failed miserably after three months because they tried to cheat the customer.”

“I let my servers assess how to deal with customers, since they are closer to god,” he jokes, “The customer is god.” Everything at Barbeque Nation, he says, is about the customer, rather than the process. It has done well because it doesn’t short-change the customer. Jacob Kurian, partner at New Silk Route (investors in Udupi restaurant chain Adigas), says, “Barbeque Nation doesn’t begrudge you on portions. If they say they are serving prawns, they will really give you unlimited amounts of prawn.”

Kurian also feels that a fixed price makes it easy for groups of professionals to visit because there’s no uncertainty about the bill. He adds that although the concept of an unlimited buffet is not new, Barbeque Nation’s execution has been superior, making imitators struggle to compete. It has been able to deliver consistency at every outlet: Unlimited food, prompt service and clean toilets.

But the journey hasn’t been without its challenges. Last year, Choudhury’s mentor and friend Sajid Dhanani suddenly passed away after an illness. Choudhury attributes much of the chain’s success to lessons Sajid taught him. “I learnt my hoteliering from him,” he says, “His style helped me take key decisions pertaining to customers, staff and systems.” 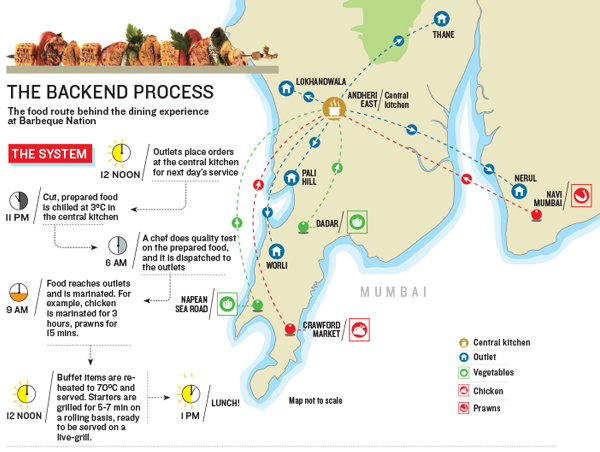 Sajid believed in letting the staff take ownership of a project and learn from the responsibility it brings. Employees benefit from a profit-sharing model, where 25 percent of profits are earmarked for them. “Sajid believed ownership across all levels was the most important thing in a customer business like a restaurant chain” says Kayum.

Choudhury admits that the first spate of expansion in 2008 didn’t go as well as planned. After establishing successful outlets in Mumbai, Bangalore, Hyderabad and Gurgaon, he opened nine outlets but wasn’t able to maintain the hands-on control as before. He realised he needed a better system to allocate responsibility and rewards to store managers because alignment and communication was not what he had hoped for.

So, he stopped expanding and spent a year creating a comprehensive review system to measure and reward store performance. An in-house call centre in Indore gathers customer feedback every day and feeds it into the Guest Satisfaction Index; customer satisfaction counts for 50 percent of the total weightage; branches are measured on Staff Satisfaction & Attrition (25 percent) and Costs & Sales (25 percent). If they meet the standards, store managers and staff are rewarded a bonus of up to 100 percent of their salary (they are not allowed to take tips).

Conventional sit-down restaurants in the same price category would be happy with 100 guests a day, but Barbeque Nation expects 300 a day to meet its high food costs. Choudhury admits that although wastage isn’t optimum, and it is something they have to work on, they have mastered other aspects of the operations. For example, they work through a fresh-in-fresh-out centralised kitchen where meat and marinades arrive separately. Seafood needs 15 minutes to marinate, chicken needs longer. Chefs have studied customer habits to forecast requirements: They know the average guest will eat 50 grams of prawn, and can hence prepare enough for 300 guests in one go to save time.

Staying Ahead
Jaspal Singh Sabharwal, partner at Everstone Capital that invested in Blue Foods (Copper Chimney and Spaghetti Kitchen), says food costs vary from 25 to 35 percent of total costs in high-end restaurants (adding prawns can add 2 to 5 percent). As a rule of thumb, food costs must remain below 32 percent. Barbeque Nation does this, and maintains a healthy seat turnover. It offers discounts to diners who arrive before 8 pm and charges more for prime dining hours. Sabharwal says, “The Rs 800 per head category is definitely growing. Brands across cuisines, such as Punjab Grill, Punjabi by Nature, Spaghetti Kitchen and certain standalone outlets, are making their mark in this range.”

The challenge for Barbeque Nation will be making menu variations. One way in which they have been doing this is to capitalise on celebrations like birthdays, job ‘treats’ and festivals. Kanwal Singh, senior managing director at Helion Venture Partners (who invested in quick-service-restaurant chain Mast Kalandar), says festive menus are a big profit driver. Barbeque Nation, like Mast Kalandar, uses seasonal interests and festivals to introduce new menus.

At Barbeque Nation, waiters do not fret over which side they serve you from; the music playing isn’t Chopin, it’s Bon Jovi. “It’s a casual restaurant,” says Choudhury, “I ask my staff to treat guests the way they would treat guests at their own dinner party.” He has actively tried to link the brand to the concept of ‘celebration’: In Mumbai, new outlets in Andheri and at Atria Mall in Worli have large tables for groups.

Kayum knows how much demand there is in large cities: “Even after five outlets, there is space for 10 more.”

After learning his lessons in 2009, Choudhury feels more comfortable with his recent expansion, and the next stage, which will see 34 new restaurants, including outlets in Chennai, Mumbai, and tier 2 cities like Raipur and Bhubaneshwar. “The response from smaller cities has been great,’ says Kayum, “Our restaurants in Baroda and Ahmedabad have the highest national Ebitda, despite Gujarat being primarily vegetarian.” Choudhury expects revenues of Rs 700 crore in the next three years.

Tweets by @forbesindia
Can We Get a Decent Smartphone Camera?
How to Empower Young Girls in India